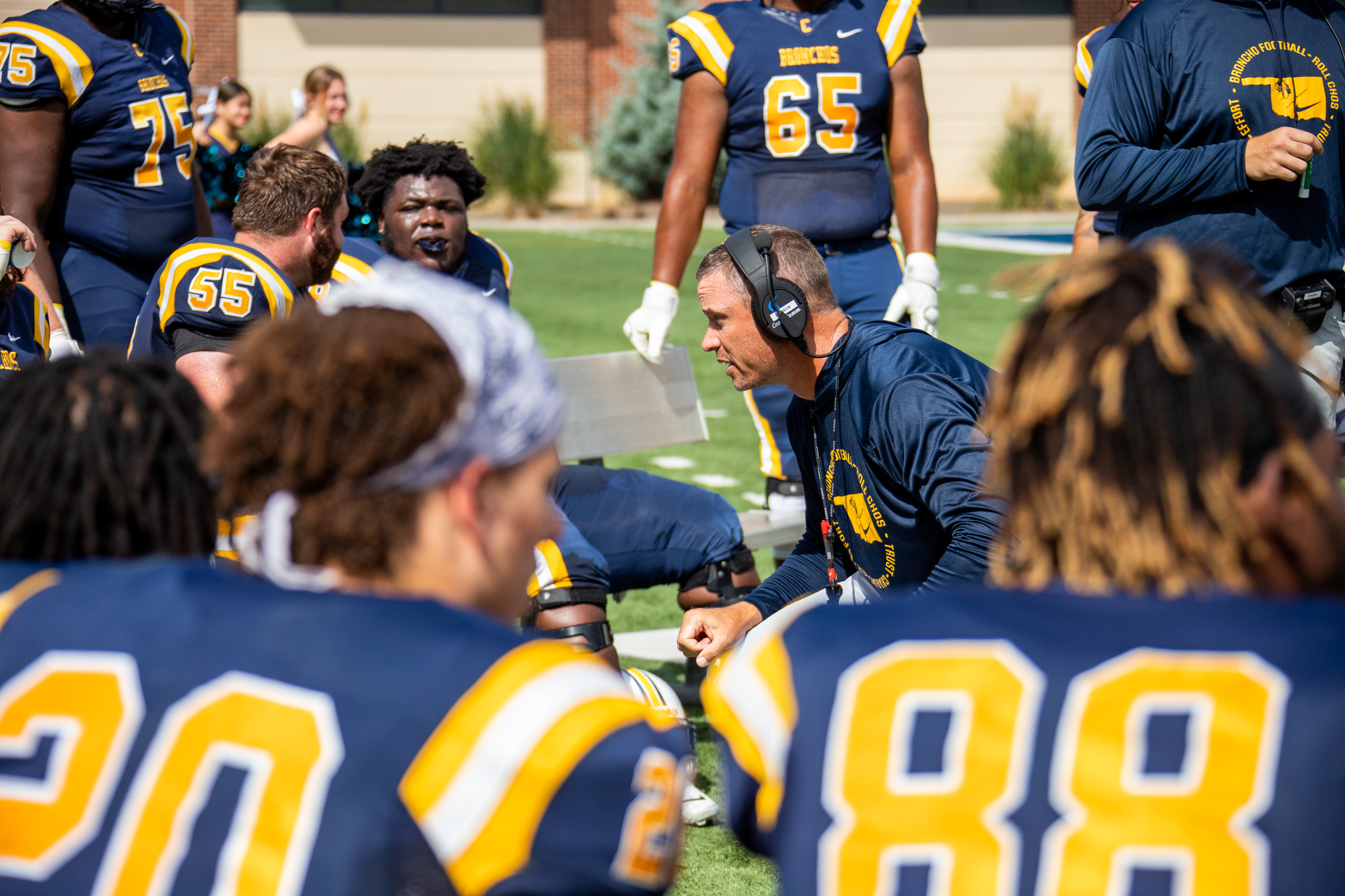 Head football coach Nick Bobeck speaks to the team during a time out in the game against Lincoln. Oct. 2. (The Vista/ Manuela Soldi).

The Bronchos make a statement over the Blue Tigers

“Winning is hard, especially after a few tough losses, but I am happy the way these guys stuck with it and came out ready to play today,” said head coach Nick Bobeck.

The Blue Tigers’ first drive resulted in negative yards; the Bronchos took over with great field position on the Lincoln 9-yard line.

Two plays into that Broncho drive, quarterback Stephon Brown scored on a 2-yard touchdown run, making the score 7-0 after only 45 seconds of play. On the Tigers next drive, they went three and out, setting up the Bronchos for another scoring drive that resulted in a second rushing touchdown for Brown making the lead 14-0. On the following drive for the Tigers, Lincoln quarterback Zamar Brake delivered a 65-yard touchdown pass to Lincoln wide receiver Winston Ausmer; The extra-point attempt was blocked by UCO defensive lineman Vakameilalo Tuifua.

Before the action-packed first quarter came to an end, UCO running back Tucker Pawley put the Bronchos further ahead, 21-6.

Opening the second quarter, both teams scored. Blue Tigers running back Hosea Franklin broke out with a 55-yard touchdown run. The Blue Tigers then opted to go for two and succeeded to make the score 28-14. The Bronchos following drive resulted in a 26-yard field goal by kicker Alex Quevedo to make the score 31-14.

Central (2-3, 2-3 MIAA) played stout defense only giving up eight points to the Tigers. On the offensive side, the Bronchos kept Lincoln guessing playing both quarterbacks, which led to multiple point-making drives.

With 14:55 left in the third quarter, UCO running back Jayce Gardner scored the Bronchos fourth rushing touchdown of the day to take a commanding 41-14 lead. The following drive for the Tigers was short-lived and ended in a punt. The Bronchos then scored another touchdown on a 57-yard touchdown pass from wide receiver Josh Moore to wide receiver Marquise King, which was a trick play, to make the score 48-14.

Three plays into the next drive, Lincoln’s Brake threw a 74-yard touchdown pass to wide receiver Aderias Ealy, making the score 48-20. The Bronchos kept answering back. UCO running back Peyton Scott scored on an 8-yard touchdown run to stretch the score to 55-20. With 7:19 remaining in the third quarter, Lincoln’s next drive resulted in another punt.

The Bronchos scored again after a 12-play drive that resulted in Brown’s third rushing touchdown of the day. By that time, the Bronchos were leading 62-20. The Tigers did answer back one more time making it 62-28.

On the Bronchos last scoring drive, freshman running back Drake Parker scored the last touchdown of the day making the final score 69-20.

The Bronchos are back on the road at 7 p.m. Thursday to play Northeastern State University in Tahlequah.