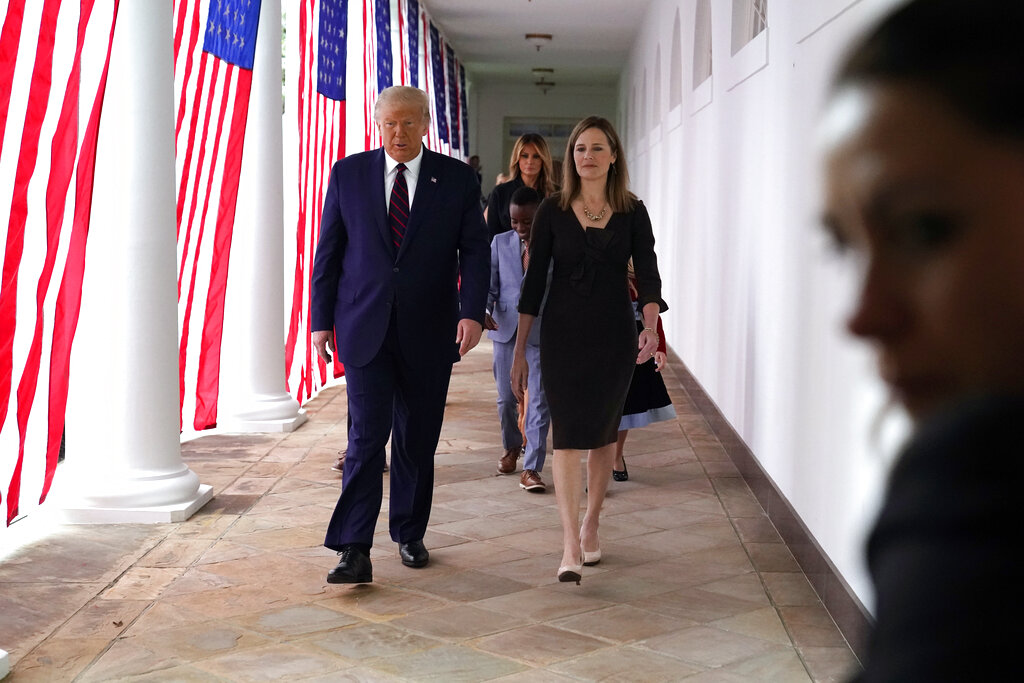 President Donald Trump walks along the Colonnade with Judge Amy Coney Barrett after a news conference to announce Barrett as his nominee to the Supreme Court, in the Rose Garden at the White House, Saturday, Sept. 26, 2020, in Washington. (AP Photo/Alex Brandon)

On Saturday, President Donald Trump nominated his pick for the Supreme Court, selecting Judge Amy Coney Barrett for the seat. Barret is currently the circuit judge on the U.S. Court of Appeals for the Seventh Circuit.

This nomination comes after the passing of women’s rights pioneer Ruth Bader Ginsburg. Barrett, a 48 year old republican and well-known Catholic would be the 3rd judge appointed by the Trump administration in his first term as president of the United States.

House democrats warn that the selection of Barrett will pose a threat to both Roe v. Wade, a case that legalized abortion in the country. Barrett has previously spoken out against those decisions, and served as a clerk for former Supreme Court Justice Antonin Scalia, who held similar views.

In the previous 5-4 conservative majority, one vote could swing a decision if a conservative judge voted in favor of a more progressive decision. With a 6-3 majority, that scenario is far less likely.

The nomination will be voted on in the Senate by the end of October. Hearings will begin on Oct. 12, and the voting process will be finalized in the week following as Republicans will look to move quickly ahead of the presidential election.

Trump had previously promised his supporters to overturn Roe v. Wade by appointing justices who would do so, and this would give him that opportunity.

Rival candidate Joe Biden has urged the Senate to hold off on appointing a new Supreme Court judge until the election is over. In a story by the Associated Press, Biden urges to “let the people decide” who they want leading the country in November before a lifelong role as Justice of the Supreme Court is selected.

The ongoing pandemic and divisive political landscape ahead of that election should be prioritized first, according to Biden.

House Speaker Nancy Pelosi also believes Trump and Republicans are moving too quickly to secure their majority. Democrats also fear of a mounting battle for the Affordable Care Act.

If the current administration proceeds with a Republican Supreme Court nominee, they will have the leverage they need to adjust or repeal the act altogether if Trump moves on to a second term of his presidency.