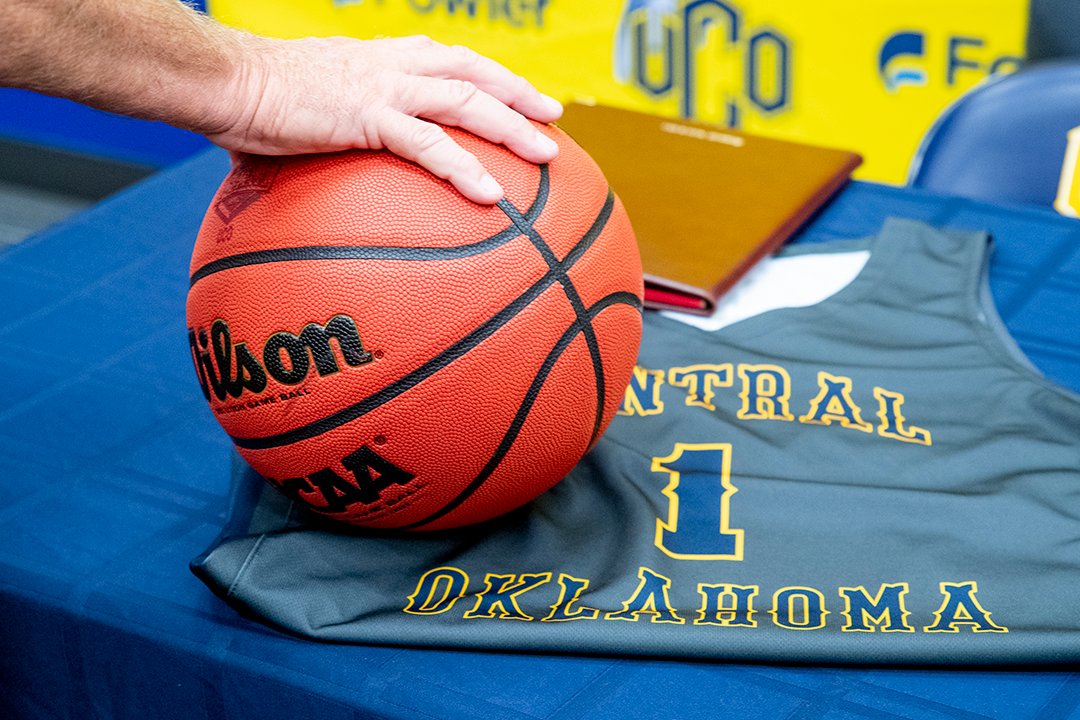 Basketball is back at the University of Central Oklahoma after a hiatus due to the COVID-19 pandemic. The UCO men's and women's basketball teams start the 2020-21 season Nov. 19, in Hamilton Field House, against Missouri Southern. The women play at 5:30 p.m., followed by the men at 7:30 p.m. (Provided/UCO Twitter)

The Bronchos prepare ahead of their matchups with Missouri Southern State

Amid a tumultuous year, the University of Central Oklahoma men’s and women’s basketball teams will step into some sense of wavering normalcy next week as regular season play begins.

Following COVID-19 protocol, the teams managed to continue a scaled-down level of practice and preparation inside of the Sports Performance Center. This included reduced numbers in weight rooms, mask compliance while training and during scrimmages, and contact tracing when necessary.

Sports will begin again this week at UCO after being stalled at the start of the pandemic in March and April, though students on campus will be shifting to online learning starting next Thursday the 26th. No schedule changes have been made to this point as COVID-19 continues to surge around the country to the highest number yet. Oklahoma sits at an average of 2500 new cases of COVID-19 each day.

Gov. Kevin Stitt and a team of leaders in Oklahoma’s medical field gathered last Thursday to express utmost urgency around the pandemic. Following the lead of college football, college basketball will resume nonetheless. Mid-America Intercollegiate Athletics Association Commissioner Mike Racy added that the conference will be the first conference in Division I or II to play again.

Women’s basketball head coach Guy Hardaker explained on MIAA Media Day that “For a team like mine that has had to quarantine three different times this season, we are nowhere ready to be playing, but for their mental well-being and mental health, it has been fantastic for our kids to have something to look forward to.”

Here’s what to expect from Broncho Basketball in the months ahead:

The Mid-America Intercollegiate Athletics Association released its preseason coaches poll, and the women’s basketball team landed right in the middle at No. 7. The Bronchos  finished the 2019-2020 season at a promising 18-10, while going 12-7 in conference play. They also made it to the postseason tournament but were knocked out in the first game against Northwest Missouri.

Although they didn’t get the ending they wanted, Hardaker can be sure of one quality his team will carry over from last season: consistency.

Three starters return to the lineup, including Kelsey Johnson—the Broncho who broke the school record for field goal percentage last season at 60.2 percent, according to assistant athletic director Chris Brannick.

Hardaker has spoken on the level of experience from his guards, citing at MIAA media day that “As the league goes, you are as good as your guards,” and most of the Broncho guards are freshmen. Hardaker touted his program’s work ethic as a reason for optimism in that position though. The women’s team prepares to take on the Missouri Southern State Lions 5:30 p.m.Thursday at Hamilton Field House.

The men’s basketball team will look to show growth after a disappointing season in 2019-2020. A season that was defined by its young but developing roster they went 11-18 on the season and 8-11 in MIAA play. They made it to the postseason but lost in their first game against Lincoln and were eliminated. A young team with a high potential will be closer to reaching that potential this season assuming the young talent continues to develop.

In the preseason coaches poll, they ranked sixth out of fourteen teams— last season they ranked last. Head coach Bob Hoffman additionally touted the new members of the team as more reason for a high level of play.

Callen Haydon, David Richardson, Jaden Wells and Conner Calavan are just some of the new faces on the roster, and all bring a different skill set to bolster what talents the team carried over from last season.

Leading some of the new faces will be three returning starters. Camryn Givens, Justin Nimmer and Seth Hurd will bring experience and chemistry to the starting lineup. Of the returning players, Givens led the team in scoring last season at 10.4 points per game.

With previous leading scorer Dashawn McDowell moving on from the team, a larger volume of shots will be available for guys like Givens and Nimmer. Keep an eye on if one of them becomes the de facto leading scorer on this Bronchos team by taking advantage of those new shot opportunities. The Calavan brothers, Carson and Conner, have said how excited they are to play with one another and should offer some exciting moments this season as well.

The team will prepare to face the Missouri Southern State Lions at 7 p.m. Thursday at Hamilton Field House.