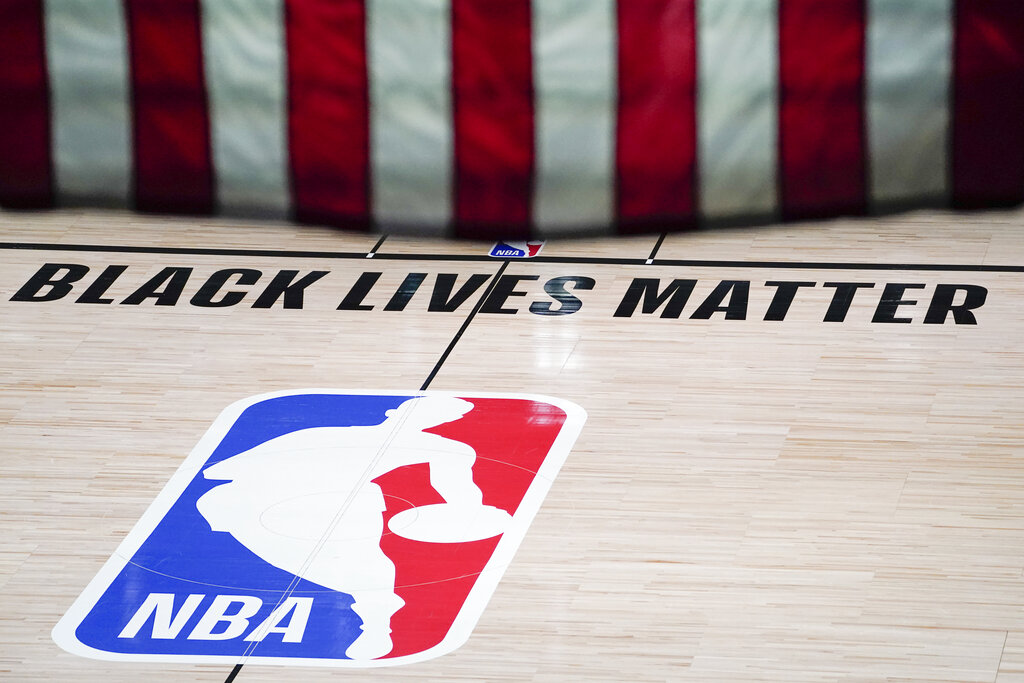 Black Lives Matter is displayed near the NBA logo in an empty basketball arena Friday, Aug. 28, 2020, in Lake Buena Vista, Fla. The NBA playoffs will resume Saturday after the league and the National Basketball Players Association detailed the commitments that made players comfortable continuing the postseason. In a joint statement released Friday, the sides say they will immediately establish a social justice coalition, made up of players, coaches and owners, that would focus on issues such as voting access and advocating for meaningful police and criminal justice reform. (AP Photo/Ashley Landis, Pool)

August 26, 2016: San Francisco 49ers quarterback Colin Kaepernick kneels for the first time during the national anthem at the start of an NFL game. He did this to shed light on police brutality in our country, with names like Trayvon Martin, Micheal Brown, and Eric Garner on his mind. Kaepernick was out of the NFL after that season, in part because his gesture was not accepted by much of the country. “Disrespecting the flag” became the narrative for those that could not or would not understand what he was trying to get across: that the lives of the marginalized members of America needed to be cherished to the same level as the non-marginalized, especially when law enforcement is involved.

August 26, 2020: The prior sunday, another unarmed black man named Jacob Blake is shot in the back seven times by a police officer in Kenosha, Wisconsin.Things haven’t changed. In a year where police violence has been highlighted, criticized and protested more than ever, accountability has yet to be applied to the police in this country.

Doc Rivers, head coach of the Los Angeles Clippers said in the days following Blake’s murder: “It’s amazing why we keep loving this country and this country does not love us back.” Black athletes feel this weight on their shoulders and are doing something about it with the influence they know they have.

Players in the NBA have played in Orlando at the end of this season due to COVID, and players were already working for social reform. “Black Lives Matter” is displayed on every court, players have social justice phrasing on the backs of their jerseys, but it hasn’t stopped police violence and they felt that especially after Blake was shot.

The Milwaukee Bucks, the NBA team closest to Jacob Blake’s murder in Kenosha, began a strike before their playoff game against the Orlando Magic on the 26th. They never left their locker room after normal pre-game warmups. Instead they spent nearly two and a half hours in that locker room on the phone with Wisconsin public officials. Namely, Attorney General Josh Kaul and Lieutenant Governor Tony Evers. They called for the Wisconsin legislature to reconvene and discuss police reform, as they had not been in session since April.

Although Kaul and Evers supported the players in calling for action, no members of the Wisconsin GOP have commented on the strike or said they would reconvene before their next scheduled meeting.

This action by the Milwaukee Bucks was the first domino to fall. The following teams slated to play that night sat out as well, and all games that Thursday and Friday would be officially postponed. Kenny Smith from the popular show on TNT “Inside the NBA” walked off the set on live television in support of the players saying “and for me, I think the biggest thing now as a black man, as a former player, I think it’s best for me to support the players and just not be here tonight.”

Players in the WNBA, who have paved the way for protests that we’re now seeing athletes do across the U.S., wore shirts with letters spelling “Jacob Blake” and had seven bullet holes painted on the backs on each shirt. Seven games were canceled that Thursday night in the MLB, and the Mets and Marlins left the field after linking arms, leaving a “Black Lives Matter” shirt alone on the diamond. In the following days, we would see many football practices canceled across the NCAA  and the NFL in favor of raising awareness of social issues.

A monumental moment in sports history happened last week. A moment where athletes saw the leverage they had, and the money they guaranteed their team owners, and threw that leverage around to demand change.

I’m tired of seeing unarmed black men and women killed in the streets by the police we fund. I’m tired of reading people trying to justify the police being judge, jury, and executioner. Every black man that gets killed by the police on camera gets a background check by those who unwaveringly support the police. Why? Because the benefit of the doubt has always lied in the hands of white people in this country.

Kyle Rittenhouse, a 17-year-old white man who has attended Trump rallies and advocated for violence against protesters in the past, shot two protesters the night after Blake’s shooting and had been handed water and thanked by Kenosha police before he killed two people. A white man can walk down the street with an AR-15 and he has a smaller target on his back than a 12-year-old black kid with a toy gun.

Tamir Rice, George Floyd, Breonna Taylor, and Jacob Blake can’t just be names on a list, and black athletes shouldn’t have to be the ones advocating for us. But we can thank them for getting us to this point and putting their worth on the line to make that happen.

Last week was just the first step in a much longer battle, but to those who say “What do these people even think will happen from sitting out?” Every NBA arena in the country will become a polling location for the November election in a deal the NBA Players Association made with the league to resume the playoffs. Owners of each team will now live with the fear of another strike, and will continue to work with players to advocate for racial justice and equality or else they won’t have a product to air on TV anymore.