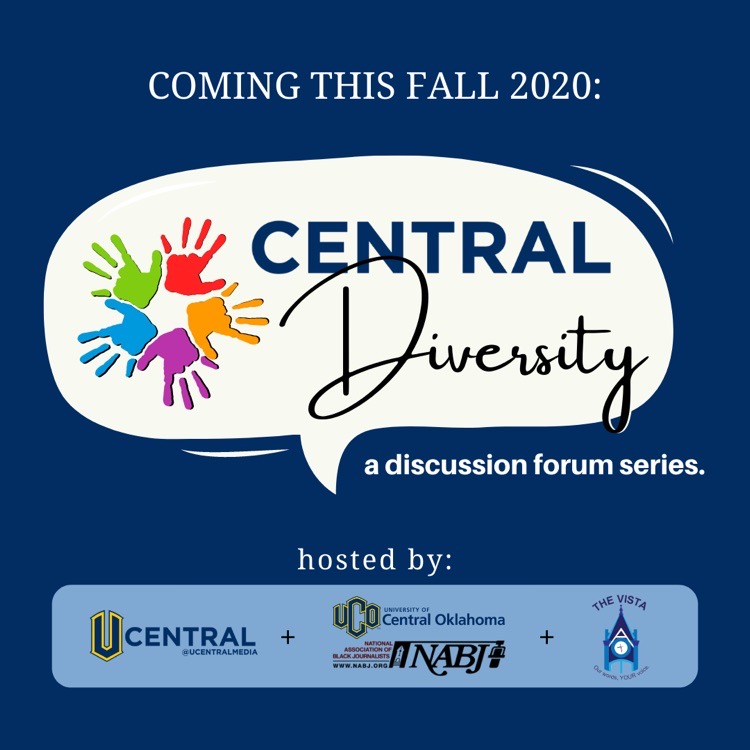 Central Diversity is a discussion forum series hosted by UCentral, The Vista and UCOABJ. (UCentral)

Editorial: What is Central Diversity?

Central Diversity is a new discussion forum series brought to you by UCentral, the University of Central Oklahoma Chapter of the National Association of Black Journalists, and The Vista to promote inclusion and social awareness on campus.

A societal shift was sparked following George Floyd’s death in May, the effects of which continue to ripple across the country. Institutions and administrations alike have been called out by the masses demanding change from systemic oppression.

Whether outright racism or inadvertent micro-aggression, society is forcing an examination of antiquated social standards. The University of Central Oklahoma is also taking steps on several levels to help address inequality on campus.

For example, the Office of Diversity and Inclusion and Office of the Inclusive Community Advocate have worked diligently over the summer to create a platform for student and faculty engagement.

Central Diversity is meant to encourage and celebrate diversity or help challenge and correct any student concerns about inequality on campus.

The idea came about in a Zoom meeting in June while members of UCentral, Professor Desiree Hill and the Managing Editor of The Vista were discussing a story unfolding on campus at the time.

There were online complaints of racism in UCO Housing that led to the discovery of racist comments from a former UCentral member and recent graduate. The Zoom meeting was a grievance session. We all had thoughts and feelings about this incident and it was a way we could speak in a professional setting about racism effecting us all.

We then decided that exact sort of session needed to happen on a larger scale. It was important from the beginning concept to have this project be a student platform for student voices. It’s meant to be a space to safely discuss anything of concern.

Central Diversity is intended to facilitate and moderate topics about inequality concerning students of all backgrounds. The idea is to directly hear from students about what they want to talk about.

In a central location, our community has a chance to use this platform in a way that truly represents the ideas and ideals of the student body.

The Vista and UCentral hope to facilitate this representation through the discussion series. Based off the response to the first episode about Allyship, there are high hopes for the future of this project.

The episode has over 800 views and the reaction on social media has been positive. People engaged with the content and asked intelligent and relevant questions about improving inclusion at UCO.

Some of the questions while we were live included:

“What other avenues should we take after reporting something to the administration and not seeing anything be done?”

“What steps can we take to hold students/faculty/leadership accountable that are actively involved/contribute to hate speech and racist language or behavior?”

“What can be done to get more alliances between students and faculty?”

According to the UCO 2018-2019 Factbook data, enrollment by African Americans, American Indians and international students has slightly decreased since 2014. However, Hispanic student enrollment has slightly increased.

We hope to grow this project to encapsulate the student voice on campus. Better understanding what helps make that voice is a first step to help encourage that process.

Part of the discussion that stood out to me was a comment by Bostic, about creating a lasting voice of allyship in place before you graduate.

“Mentorship. Make sure there’s a legacy left behind. Whether it’s your voice or the voice of those you’ve mentored.”

I believe Central Diversity can help foster the process of inclusion at UCO. The conversations held in this series are just one small part of what we’re doing to support diversity and inclusion on campus.

Central Diversity will hopefully create the legacy voice of change led by students for students. The next episode will be about activism and the unfortunate recent trend of performative activism seen on social media.

Contact UCentral or The Vista with any questions, suggestions, comments or concerns. Stay tuned for our next episode at the beginning of September!