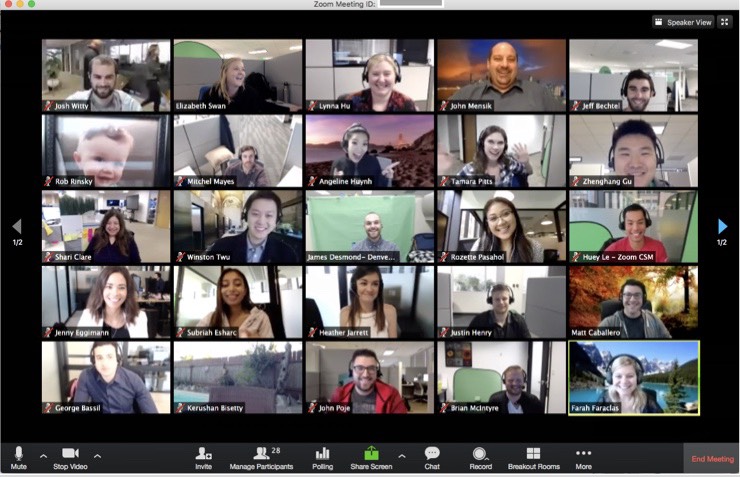 Zoom employees show how they use their app. Recently, the video conferencing app admitted their mistake in allowing their calls to flow through its two Chinese data centers, which was part of its efforts to handle the increase in users. (Provided/Zoom's blog)

The app became a popular virtual meeting site as jobs and schools shut down in-person operations following the outbreak of COVID-19.

Millions of students and workers around the globe are using Zoom now on a daily basis. The company said late on Friday that certain meetings held by users that are not Chinese have been “allowed to connect to systems in China, where they should not have been able to connect.”

Zoom said it was a mistake to allow the calls to flow through its two Chinese data centers since February as part of its efforts to handle the increase of users.

The company has also stated they fixed the issue since the routing of user data occurred. They said it was “under extremely limited circumstances” and government customers were not affected.

Vivian Bunch, a junior at the University of Central Oklahoma said her classes were switched to Zoom. After the issue TikTok had a few months ago with transporting data to China, she said she doesn’t find this to be a surprise.

“I don’t trust most social media sites anymore, and I can almost guarantee Zoom only fixed the issue because they were caught in the act,” Bunch said.

Zoom has headquarters in China with more than 700 staff members. Until now, it has sought to reassure critics outside of China who have privacy concerns that their data was not routed through Chinese servers.

“Data originating in the U.S. stays in the U.S., and cross-border meeting data goes to wherever the host’s enterprise account is headquartered,” Zoom said on Thursday.

Zoom first launched in April 2019 and had 10 million users by the end of the year. It now has 200 million daily active users.

With increased traffic, Zoom is having to fix their privacy concerns and their technology and policy updates as well. Undisclosed data sharing features that allowed users to harass other users and misleading statements about its encryption capabilities were also revealed.

“I was in a Zoom session with my class and as my professor was talking, someone had hacked into an account and started typing out racial slurs on the screen,” said University of Oklahoma sophomore Marissa Aguirre. “The whole class was in shock and everyone started saying things to the person.”

Aguirre added that her professor said he was going to report the incident to OU officials, and shared she doesn’t think anyone should be harassed like that.

Citizen Lab, an interdisciplinary lab based in Toronto, Canada, recently did research on Zoom and said the app was a “high priority target” for intelligence gathering and hacking by nation-states, and warned that it should not be used by parties sharing sensitive information.