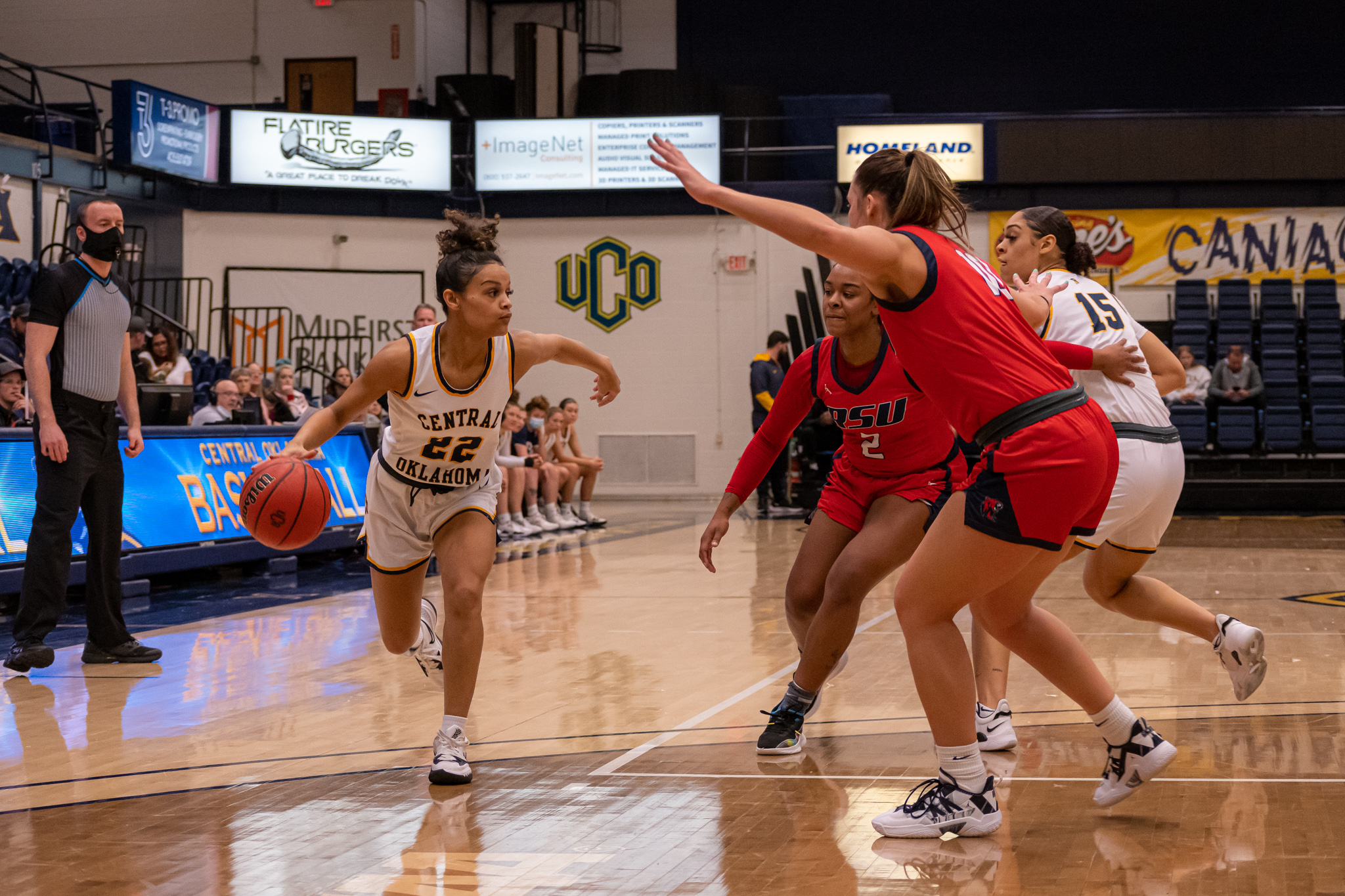 Winning streak continues for the Bronchos

UCO basketball put on a show Thursday with victories over Northeastern State as the men and women beat the Riverhawks by double digits at Hamilton Field House.

The women’s team beat Northeastern State 69-52, stretching their home winning streak to 6-0. Senior forward Kelsey Johnson led the way, scoring 20 points in 23 minutes, delivering the Lady Bronchos their 11th win in a row against the Riverhawks, giving them a 9-5 record on the season and a 5-3 record in conference play.

The men’s team beat Northeastern State 80-65, led by junior forward Camryn Givens who scored 23 points, which is their eighth win in a row, all by double-digits. This season, the men’s squad is now 12-2 overall and 7-1 in the Mid-America Intercollegiate Association.

With a new semester amongst us, the Vista will preview the players from both teams to watch out for this spring as the Bronchos look to maintain their winning ways.

Head Coach Guy Hardaker has two players on his team who are Top 20 in the MIAA in scoring, Kelsey Johnson and sophomore forward Alayzha Knapp.

Johnson is a 6-foot-3 senior forward out of Washington, Oklahoma. She is scoring 19.8 points per game on 55 percent shooting while averaging ten rebounds per contest. Johnson also averages 7.2 field goals and five free throws per game while shooting 86 percent from the line and has only missed 11 free throws on the year. The Lady Bronchos forward is a shot-blocking machine with 0.9 blocks per game, giving her 13 on the season while logging a team-high of 28.6 minutes per game.

If these stats aren’t impressive enough, the outstanding forward has eclipsed the 30-point mark twice this season. Johnson scored 32 points against Harding and 30 against Newman.

Knapp, the 6-foot-2 transfer from the University of Arkansas at Little Rock plays the forward position. Knapp averages 11 points per game for the Lady Bronchos and played high school basketball at Tulsa Union.

Hardaker also points to Ailyah Llanusa as a breakout player this season, becoming a top guard due to her off-season improvements. Llanusa is a 5-foot-7 sophomore guard from Choctaw, Oklahoma, averaging 7.7 points per contest.

“This is a team that is getting better every day. We play up to 12 kids a game with an up-tempo style of play, hoping we can make a run at the conference race and NCAA Tournament,” Hardaker said..

The men’s basketball team is rolling right now as they have not lost a game since Dec. 2. They are also an impressive 9-0 at Hamilton Field House on the season.

Head Coach Bob Hoffman says the Bronchos lead the league in scoring with an average of 85 points per game.

“I am most proud of our guys and their ability to get one another excited to play the game of basketball.”

Isaiah Wade, Camryn Givens, and Callen Haydon are a few of these guys looking to have a breakout season.

Wade is a 6-foot-7, 225-pound senior forward out of Oklahoma City. He averages 19.3 points per game on 12.1 attempts with 9.2 rebounds. Wade is also scorching from beyond the arc, averaging close to 59 percent from the 3-point line on the season. He has been the MIAA player of the week once already this season.

Givens, the 6-foot-6, 205-pound junior from McKinney, Texas, was also named  MIAA Player of the week. He averages 16.1 points per contest, adding to his 5.9 rebounds per game.

Callen Haydon, ranked 20th in the nation in assists is a 5-foot-11, 170-pound guard out of El Reno, Oklahoma,. Haydon averages 12.9 points per game to go along with 5.7 assists which is a team-high.

Jaden Wells, a 6-foot-1, 160-pound guard from Hurst, Texas, averages 14.2 points on the season to give the Bronchos four players averaging double digits in scoring this season. Givens, Wade, and Haydon are the other three players in this category.

Coach Hoffman encourages more students to come out and watch some games while Bronchos look to maintain their home winning streak.

There are undoubtedly many players to watch out for this season, whether the Lady Bronchos or Bronchos.

Come check out the Bronchos and Lady Bronchos Jan. 20 when they take on Northwest Missouri at Hamilton Fieldhouse.