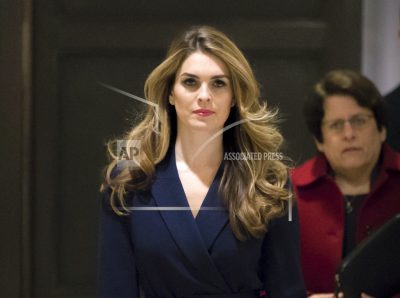 In this Feb. 27 2018 photo, White House Communications Director Hope Hicks, one of President Trump’s closest aides and advisers, arrives to meet behind closed doors with the House Intelligence Committee, at the Capitol in Washington. (AP Photo/J. Scott Applewhite)

WASHINGTON (AP) — White House Communications Director Hope Hicks, one of President Donald Trump’s most loyal aides, is resigning.
That’s according to a White House official briefed on her plans but not authorized to discuss them publicly.
The news comes a day after Hicks was interviewed for nine hours by the panel investigating Russia interference in the 2016 election and contact between Trump’s campaign and Russia.
She acknowledged to a House intelligence panel that she has occasionally told “white lies” for Trump. But she said she had not lied about anything relevant to the Russia investigation.
Hicks served as Trump’s one-woman communications shop during his winning campaign and has remained one of his most trusted aides.

BREAKING: NBC News confirms that Hope Hicks is resigning from her position at the White House. Trump said of Hicks' departure:

"I will miss having her by my side but when she approached me about pursuing other opportunities, I totally understood." pic.twitter.com/z1mlPfefy9