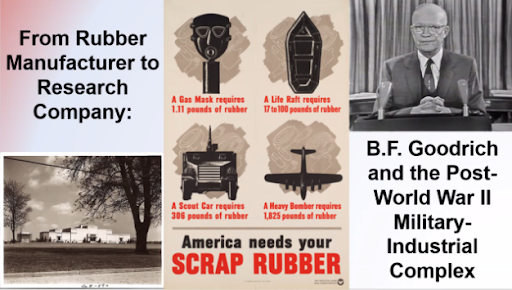 The presentation’s goal was to “understand the role of a major U.S. corporation in the emergence of a new geopolitical order in the wake of the Second World War,” the event description read.

Berkhout said at the beginning of the presentation that he would draw on some of the research he had done for his dissertation, called “The Military-Industrial Complexes of WWII: Research Facility Expansion and Product Diversification at B.F. Goodrich and the Largest U.S. Industrial Manufacturers, 1941- 1960.”

“I chose to write about the rubber industry for a couple of reasons,” Berkhout said.

“First, I wanted to document how a large-scale U.S. industrial corporation contributed to the so-called “Arsenal of Democracy” during World War II, but I also wanted to learn about the challenges that the company faced during both mobilization and demobilization.

“Second, I narrowed my focus to B.F. Goodrich and the rubber industry because there were sources publicly available to tell that story at the University of Akron Archival Services and the National Archives in College Park, Maryland,” Berkhout said, citing the history of Akron, Ohio, as the “Rubber City.”

“The major challenge for business historians is finding primary sources that tell us how corporations actually work, and at the University of Akron, there are a wealth of documents detailing the strategic decisions made in the Research Division of B.F. Goodrich during and after WWII,” Berkhout said.

At the end of the presentation, Brooke Brady, a student in the audience, said, “This has given me some thoughts on how to possibly go about a future dissertation.”

Berkhout’s dissertation may be found for further reading about the history of rubber at https://scholarspace.library.gwu.edu/etd/h415p9660.