VA pick said to have crashed car while drunk 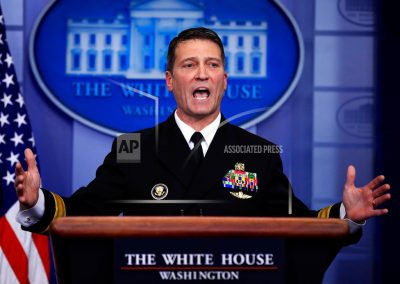 A summary of allegations against President Donald Trump’s pick to head the Department of Veterans Affairs says he recklessly prescribed drugs, had his own private stock of controlled substances and got drunk and crashed a government car.

The summary was released by Democrats as the White House rallied behind Dr. Ronny Jackson.
Based on conversations with 23 of Jackson’s colleagues and former colleagues, the review says Jackson was nicknamed “Candyman” by White House staff because he would provide prescriptions without paperwork. Drugs he prescribed included Ambien, used for sleep, and Provigil, used to help wake up.

The colleagues and former colleagues also told congressional staffers that there were multiple incidents of drunkenness on duty and said Jackson got drunk at a Secret Service going-away party and wrecked a government car. Jackson says he “never wrecked a car.”