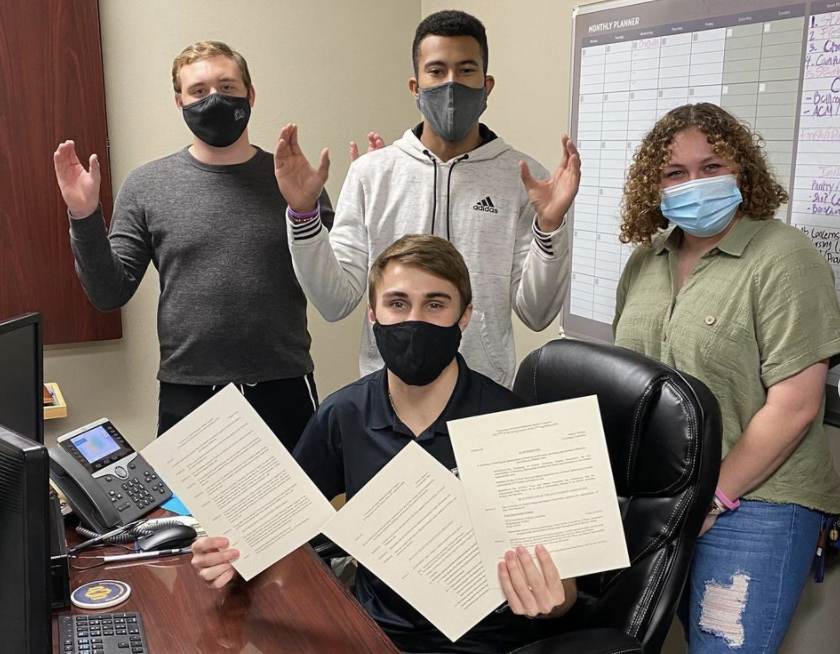 The Student Association at the University of Central Oklahoma held the last meeting of the fall 2020 semester. Several resolutions and confirmations were made in preparation for the upcoming spring 2021 semester. (Provided/UCOSA Instagram)

UCOSA Secretary DeLauren Diaz said the final Congress of the semester is often the busiest.

The UCO Student Association tackled numerous agenda items during its Monday congress, including the passage of three new bills and its annual vote of no-confidence on the 11th and final meeting of the semester.

Congress was delayed 22 minutes after its scheduled start-time due to an insufficient number of attendees to establish a quorum. Nathan Ferrell left his apartment to attend the physical Congress to resolve the dilemma.

Three UCOSA officers, Chairman De Shannon, Vice-Chairwoman Hannah Turner and Diaz, were each due for their votes of no-confidence, an annual process in which Congress can vote to remove officers from their respective positions by a two-thirds majority.

All three were confirmed in their current positions; Shannon in a five-to-46 vote, Turner in a 25-to-14 vote and Diaz in a one-to-49 vote.

You can read more about the vote of no-confidence here.

Following the votes of no-confidence was the first of three new items: CR20-102, an annual resolution to confirm UCO firearm mandates. The bill, authored by Secretary Emily Grim, was reviewed by the UCOSA Committee for Accountability, Reform, and Transparency. It passed by unanimous consent from Congress.

The resolution, which must be reconfirmed each year by UCOSA, serves as a declaration of approval from UCOSA to university legislators regarding firearm policies, Grim said.

“We have passed this resolution annually for the last few years,” Grim said, “specifically to strengthen and clarify UCOSA’s position on this topic.

For us being able to annually say that we believe that the policy we have should be kept the same is our way to make sure that our voice continually is heard.,” Grim said.

The bill also included rationale from Grim as to why UCOSA confirms the university firearm policy, citing gun-violence statistics from the Journal of Injury Prevention and the Journal of Aggression and Violent Behavior.

“This is our way to make sure we continually tell the administration, to tell UCO. . . they know that we continue to hold this position,” Grim said.

Grim also clarified that Neuhold-Ravikumar can allow some students or faculty “to carry a concealed firearm under specific circumstances.”

Congress also passed CB20-102, a bill acting to modify the method by which funds are distributed from the UCOSA Student Activity Fund Reserve, by unanimous consent.

CB20-102 was co-authored by Shannon and Diaz and reviewed by the UCOSA Committee for Ways and Means.

The bill removes two sections, B and C, from the amendment regarding allocation of money from the SAF Reserve:

All that remains of the amendment is section A, which states that the SAF Reserve should not be depleted entirely by any UCOSA account managers.

Diaz said UCOSA has been operating by this method for “quite a while,” though it could not be voted as an official provision because the SAF Budget Manager, Teresea Metzger, was only recently able to review it.

“This was a change we implemented back when we had the Uber program on campus,” Diaz said. “When the Uber program went away, we kind of took a review over the statutes and bylaws of the Constitution of UCOSA.”

“What we’re doing is changing it now so that it makes it easier for us to allocate those funds towards student organizations with less red tape,” Diaz said. “It’s just like how we as a university spend your student activity fees that charge to your tuition and go to benefitting you as a student.”

CB20-102 will be distributed to Metzger and Associate Vice President of Student Affairs Cole Stanley.

Congress also passed CFR20-101, an approval for the allocation of sponsorship funds to the UCO Association of Black Journalists for events during Black History Month, on Monday.

CFR20-101 was co-authored by Hannah Scarberry and Lukas Byfield and reviewed by the Committee for Ways and Means.

Congress concluded with an announcement from Scarberry, who said that the annual budget application for student organizations will be available on Nov. 30 and due on Feb. 5.

The final Congress of the semester adjourned at 5:02 p.m. UCOSA will resume meetings during the spring semester.