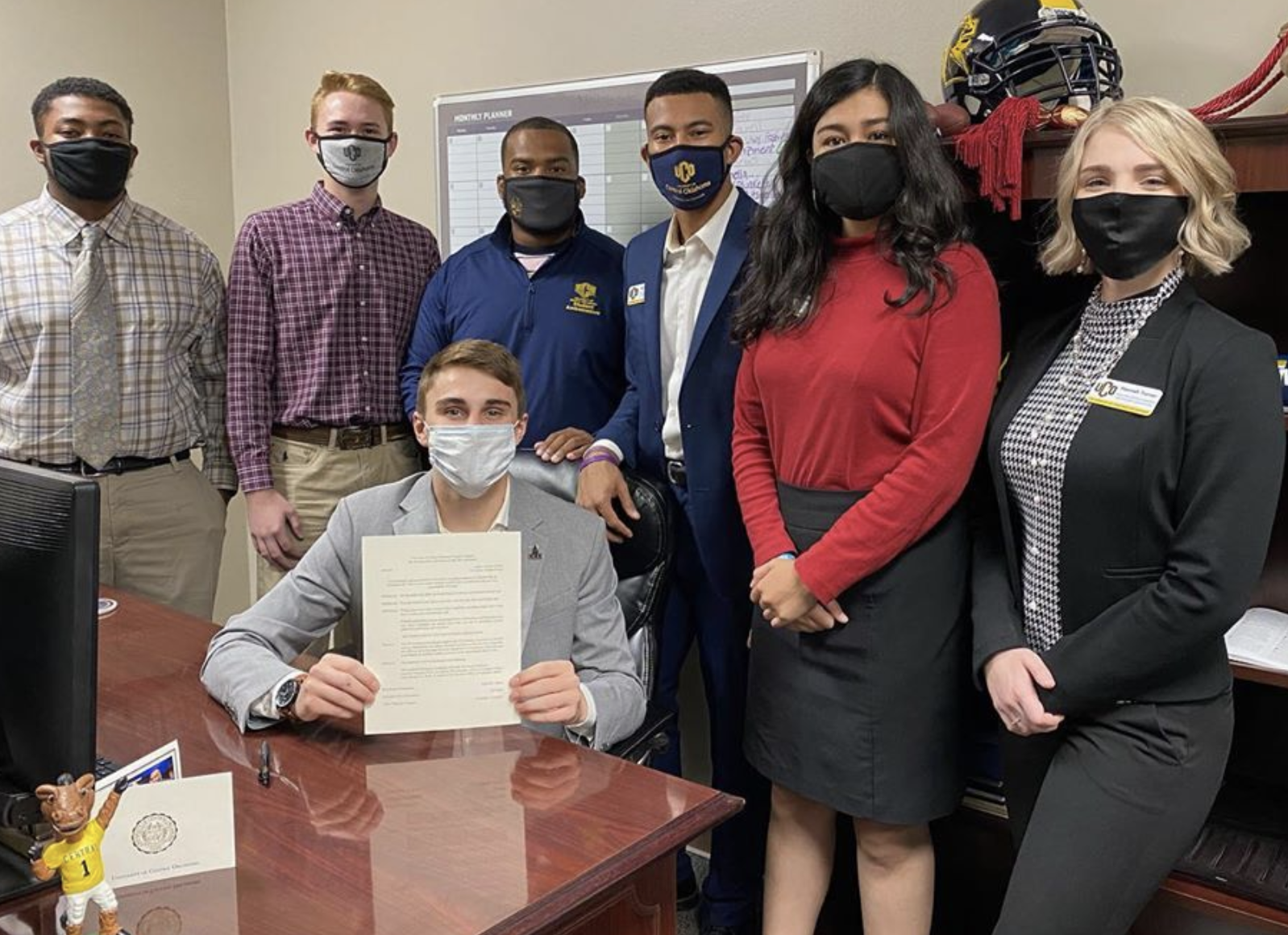 The UCO Student Association passed its first bill of the year, urging campus administration to not enforce attendance policies on Election Day, during its congress on Oct. 19. The bill passed unanimously and is intended to be distributed to UCO President Patti Neuhold-Ravikumar.(Provided/UCOLimbaugh.Coleman Instagram)

UCOSA calls to faculty for no classes on Election Day

The UCO Student Association passed its first bill of the year, urging campus administration to not enforce attendance policies on Election Day, during its congress on Monday afternoon.

The bill, CR20-01, was the fourth agenda item on UCOSA’s Monday congress. It was authored by UCOSA Senator Tyler Owens, a representative of the on-campus community.

“This bill is just urging professors to not enforce attendance policies,” Owens said, “or potentially not hold class if their schedules can allow for that on Election Day.”

The bill, passed unanimously by UCOSA members present at Monday’s congress and signed by UCOSA President James Limbaugh, is intended to be distributed to UCO President Patti Neuhold-Ravikumar.

Co-Interim Vice Presidents of the Office of Academic Affairs, Charlotte Simmons and Gary Steward Jr, will each receive a copy, as well.

“So as to enable students as well as professors to make sure they have adequate time to be able to go vote,” Owens said, “and also to encourage younger students to volunteer at polling places as well.”

“Having [CR20-01] signed by our student government as well as our student body president,” Owens said, “it gives us a decent amount of weight with those offices.”

Owens clarified that UCOSA does not have the legislative power to make official changes to campus scheduling.

“Changes to the schedule need to be approved by the UCO administration,” Owens said.

Owens said that UCOSA did not have time to draft legislation that to petition for a mandated day off for Election Day, though that is the intent of the congress for the future.

“It took as a while to get committees in line,” Owens said. “By the time we got our committee together and once this legislation actually came up, it was too late to actually mandate anything, but that’s what our goal will be.”

Owens said that UCOSA was unable to meet with the UCO Faculty and Staff Association to pass a joint resolution.

“We had intended to meet with (UCO Faculty and Staff Association),” Owens said, “however, the faculty and staff association only meets once-a-month and. . . we didn’t really have time to meet with them.

“As far as getting it passed with them for this year, the time frame just wasn’t there,” Owens said.

Osburn, a republican, represents Oklahoma District 81, which includes UCO’s campus. Fellow republican State Representative Mike Sanders, who represents District 59, was also scheduled to speak but was unable to attend due to a last-minute rally, according to UCOSA Chair of Congress De Shannon.

Osburn, who will contend for his third term this November, gave a speech pertaining to the importance of public service in elected positions.

“You’re not here to make this a stepping stone for a better position at some point, Osburn told the congress, “you’re here to represent the people that are on this campus.

Osburn closed his speech by relating to the congress with his own experience.

Limbaugh said that UCOSA plans to also include democratic candidates as guests at future UCOSA congresses.

“We’ve been in contact with Cyndi Munson, and we’re working on getting her to congress,” Limbaugh said.

Munson, a representative of Oklahoma’s 85th District, served as the UCOSA Chair of Congress during her time as a student at UCO.

Marissa Murrow, who was a member of UCO’s Sigma Kappa chapter, died Oct. 3 due to injuries sustained in an head-on automobile collision.

“As a campus, as a whole, we dealt with a lot of loss this semester,” Vice Chair of Congress Hannah Turner said.

Turner, a member of Sigma Kappa, advocated to the Congress to seek out help from counseling services.

“I’d like to remind you guys all to take care of your mental health,” Turner said, “as leaders that’s something really important.

“We can’t lead others if we’re not strong, mentally, ourselves,” Turner said.

Limbaugh, a member of Pi Kappa Alpha, was Ward’s roommate. He said his attention has been directed towards his work within the fraternity in its response to Ward’s death.

“UCOSA’s response, to me, is kinda more of a long-term thing to make sure we’re there for our students,” Limbaugh told the Vista.

Limbaugh said that he has had conversations with the UCO Counseling Center, who recommended for students to use Therapy Assisted Online, a virtual counseling resource offered by UCO.

“In this season of everything being virtual,” Limbaugh said, “it’s not easy to do therapy and be there for students online.

“For me, that’s one thing that I would like to kind of invest money in and make sure they have all the resources necessary,” Limbaugh said.