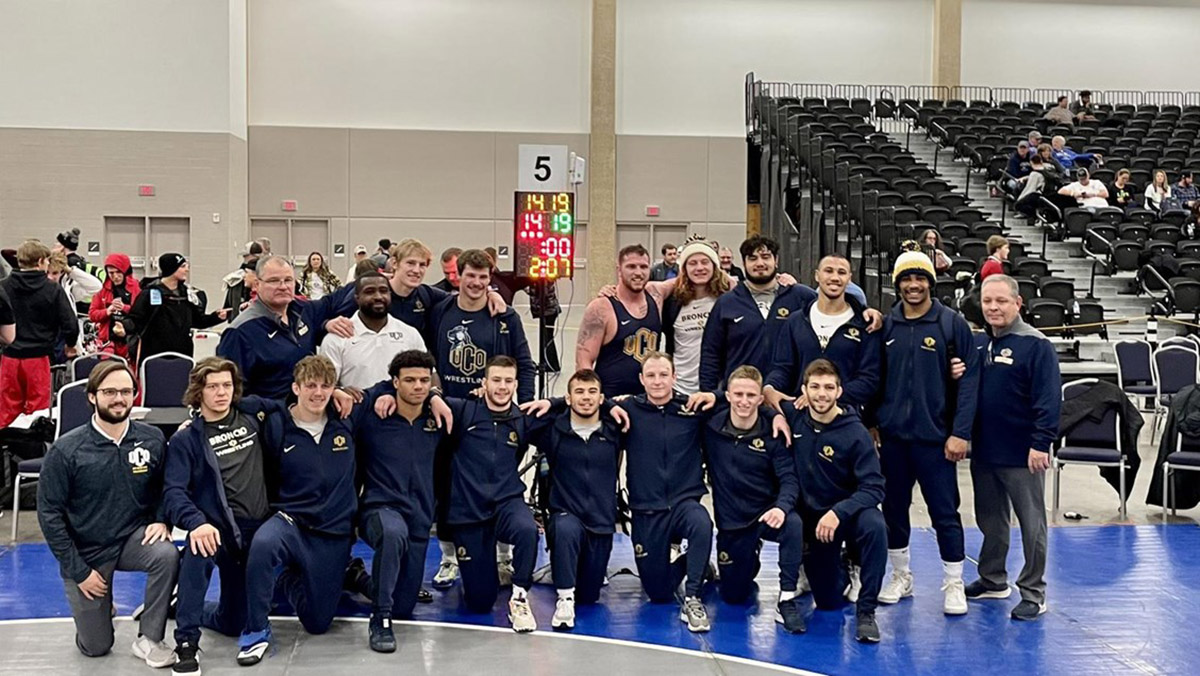 UCO wrestling claimed the NWCA Division II National Duals title for the first time in over 20 years on Jan. 7 in Louisville, Kentucky.

Top-ranked UCO won 19-14 over the four-time reigning champion St. Cloud State Huskies, who had won a record 77 straight matches. The Bronchos moved to 7-0 with their 13th consecutive win and ended the Huskies historic winning streak.

“I just had a feeling going into the matches that we were going to take them down….the brotherhood and hard work everyone puts in makes this team special,” said junior wrestler, Hunter Jump.

Jump, weighing in at 165 pounds, was the star of the day and came through with possibly the biggest win of the dual in his earlier matches.

Jump knocked off No. 8 Devin Donovan 3-1 on a takedown with 29 seconds remaining in sudden victory to clinche a perfect 4-0 performance in the tournament which landed him 17-3 for the season and shot the Bronchos up to a 15-5 lead.

“I never really get nervous, I just try and zone everything out and just get involved in the match,” Jump said.

Not only did Jump help secure the title for the Bronchos, he also snagged the MIAA Wrestler of the Week for his outstanding performance at the national duals.

“It was a great accomplishment for me but also for my team,” he said.

The team was missing three of its star wrestlers due to illness, which was expected to set them back in the duals, but nonetheless, UCO persevered.

The other wins included Brik Filippo (149) and Ty Lucas (157) who scored a one-point victory to secure a 15-8 lead, then another win from defending national champion Heath Gray (184). The other wins for the Bronchos came in the first two weights from Paxton Rosen (125) and Tanner Cole (133).

Rosen gave the Bronchos the start they needed in the opening match, with two takedowns in a 6-1 decision. Next, Cole followed with a 6-0 shutout to continue the momentum for the Bronchos.

Filippo fought hard, ending regulation at 1-1 before scoring the winning takedown with only 50 seconds left in the first sudden-victory period of the dual.

Lucas later pulled out a 9-8 victory on an escape with 29 seconds left. Gray secured the win with his 13-5 major decision. Gray ended the last of his five takedowns with 30 seconds left and kept control of his opponent the rest of the match to collect the extra point that made it 19-11.

The Bronchos are now gearing up for the 2022 NCAA Division II Wrestling Championship, which is being held in St. Louis March 11-12.