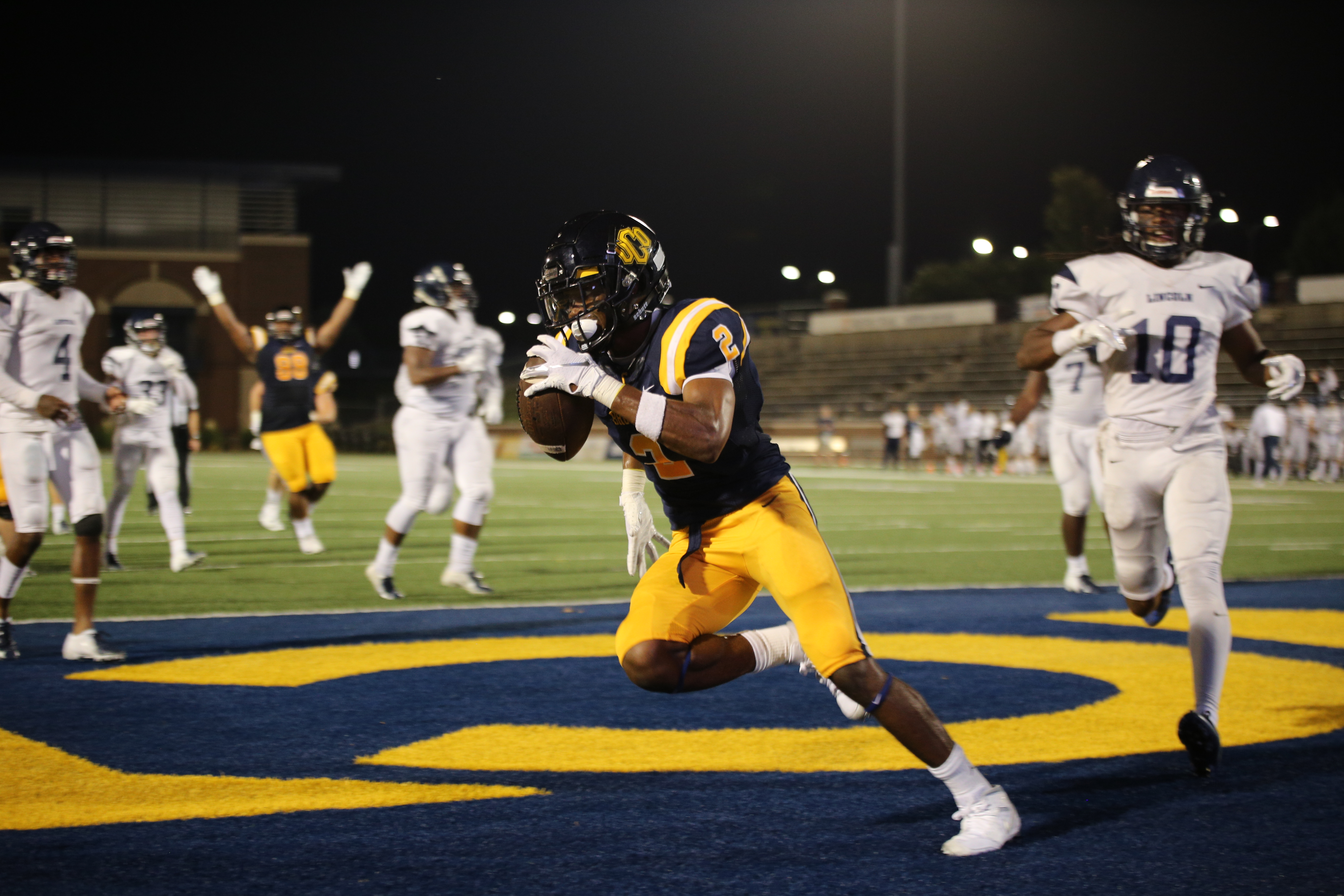 Putting up the first shutout of the season while scoring nine touchdowns, the University of Central Oklahoma Bronchos trampled the Lincoln University Blue Tigers 63-0 at Wantland Stadium Saturday night.

This was the third consecutive win over LU for UCO, as the Bronchos have never been topped by the Blue Tigers.

“We knew that there wasn’t a lot of depth over there and we just wanted to wear them out a little bit early on and that was part of the game plan,” said UCO head coach Nick Bobeck. “The kids did a pretty good job with it.”

This was the largest margin of victory played at Wantland Stadium ever since UCO played their first game there on Sept. 18, 1965. It was also the first game of the season where the Bronchos led the entire way.

“It was good to play a full game,” Bobeck said. “I think our kids were ready to play, there were some things in the first half that we weren’t happy with, in the first quarter in particular.”

The Broncho defense forced a three-and-out on the first drive, giving up less than five yards. Six plays later, running back Taj Griffin scored on a 42-yard run for the first score of the game. It was a 70-yard drive for the Bronchos. But this would be UCO’s only touchdown, as on their next two drives, they turned the ball over with a fumble and were forced to punt after going three-and-out on their final drive of the quarter.

Even with their first quarter struggles, the Bronchos would go on to score eight touchdowns the rest of the way. Bobeck said he liked that the Bronchos forced turnovers during the run.

The Bronchos special teams were also able to make a play in the first half as Payton Scott blocked a punt and recovered it at the Lincoln 12-yard line. This set up a four-yard touchdown run by T.J. Roberts two plays later.

“Being able to create turnovers is a big deal,” Bobeck said. “I didn’t like the way we played in the first quarter, we were on the field far too much. When you’ve got an offense as explosive as ours is, we need to get people off the field quicker.”

Two different UCO quarterbacks threw a touchdown pass as Chandler Garrett connected with Josh Moore from five yards out. The play was set up by a Keats Calhoon 43-yard pass to Dustin Basks. Earlier in the game, Calhoon completed a 29-yard touchdown pass to Mekail Hall for the second score of the quarter.

Calhoon, who started the game because Will Collins was out with a concussion, finished the game 16 of 19 on passes with two touchdowns and 178 yards.

“It’s just being efficient and that’s what Keats is,” Bobeck said. “The ball doesn’t come out the way that we wanted it to all the time, but Keats knows where to go with the ball. He’s smart, gets everybody in the right place, that’s the thing he and Chandler [Garrett] both do. They do a good job of managing the game.”

All of Garrett’s three passes were touchdowns as he finished with three.

“Overall I was really proud of our kids,” Bobeck said. “We played a lot of bodies tonight. A lot of those guys went in and played well. [They] made plays and showed up.”

Saboor Daniels and Diego Richards recorded their first touchdowns as Bronchos. Daniels scored his with a three yard run. Richards scored his first UCO touchdown on a 21-yard pass from Chandler Garrett; this was UCO’s final touchdown of the night.

UCO is now 2-1 on the season and will travel to Maryville, Missouri to battle the undefeated, No.7-ranked Northwest Missouri State University Bearcats. The Bronchos defeated the Bearcats 31-21 in the 2018 season.