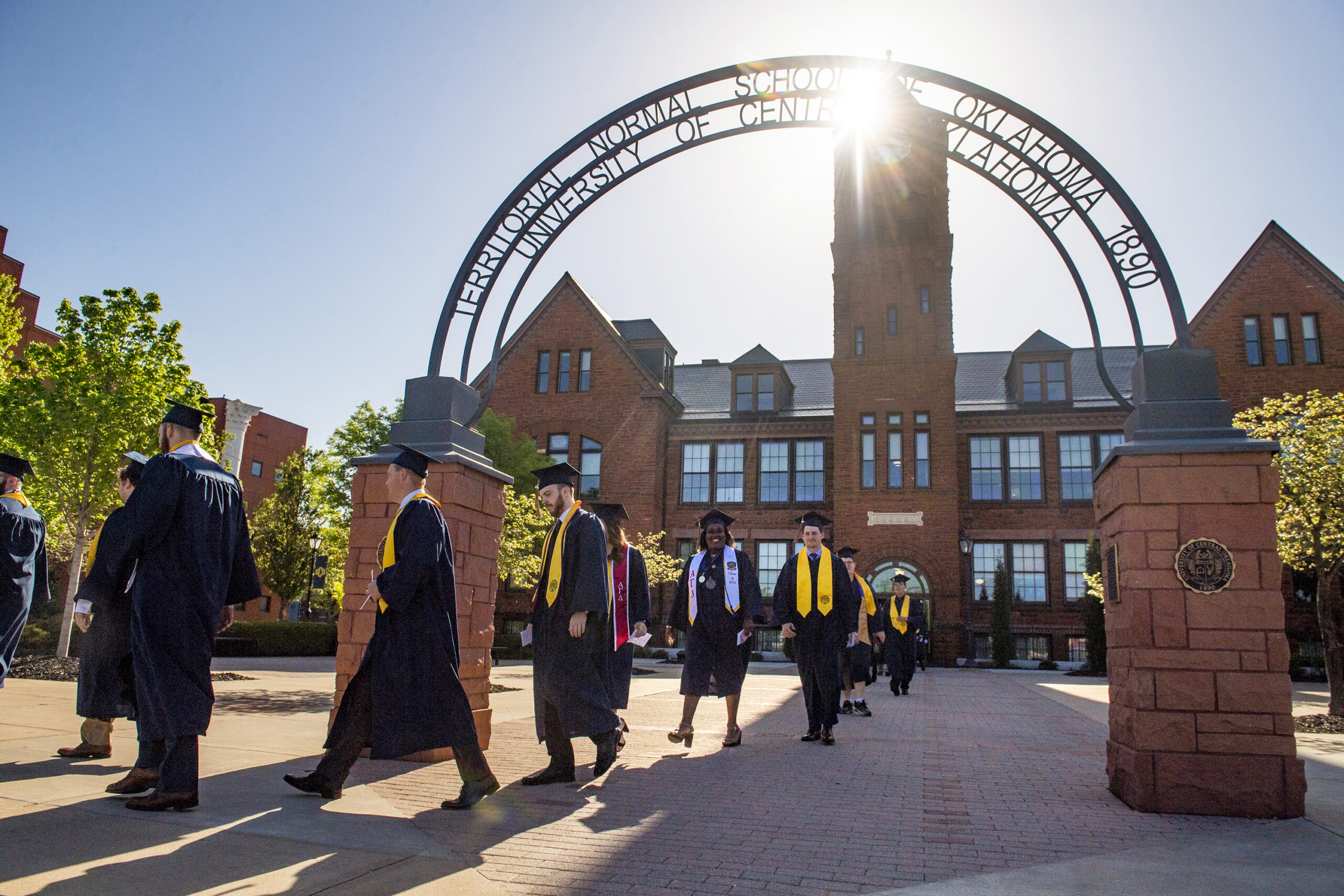 Graduating students walk through the arch at Old North. The university recently announced the schedule for the spring 2021 commencement ceremonies, which will also include graduates that were not able to walk in fall 2020 due to the coronavirus pandemic. (Provided/University Communications)

The University of Central Oklahoma released new details Wednesday about the upcoming in-person commencement ceremonies for spring and summer 2021 graduates and 2020 alumni.

Graduates who are interested in attending the ceremonies must register by May 6. If the ceremonies are canceled due to inclement weather, they will be rescheduled for May 8 and 9 if weather permits, the university said.

Registered graduates will receive a link to download tickets for their four guests. Guests must be seated socially distanced in groups of four at the stadium.

Face masks are required for both guests and students. Students must wear flat-soled shoes at the ceremonies as “shoes with heels will damage the football turf,” said Adrienne Nobles, UCO vice president for communications and public affairs.

The university also said that they will use metal detectors at the gates and are asking guests and students to minimize the number of items carried into the stadium.

UCO announced that they will also be continuing the tradition of the Old North Walk this year, if weather permits. Graduates who are interested in this must gather at the north side of Plunkett Park an hour before their respective ceremonies begin.

The university confirmed the dates and details for the commencement ceremonies less than a month before they were scheduled to begin.

“It didn’t affect me much, but I would say that the graduation announcement was pretty rushed,” said Yana Son, a graduating marketing senior from Kazakhstan. “However, if my family planned a trip here, it would be definitely late since ticket prices are rising everyday.”

However, professional media alumni Jake Harris messaged The Vista that he felt that the university did not provide spring 2020 graduates with enough information in advance of this graduation update.

“We didn’t receive any emails leading up to it,” Harris said. “There wasn’t a section or form for a past 2020 graduate, so we didn’t even know if we were getting anything.”

Harris added that the university did not contact him or other 2020 graduates to ask for their availability or preferences for the ceremonies. However, Harris said he still chose to come back and walk in May because he “wants to continue his family legacy” as a third-generation Broncho, following in his grandparents and parents’ footsteps.

“I’m thankful to at least have anything because I feel like we just got shunned in May,” Harris said. “I never heard anything about graduation; I got a Distinguished Service Award, and they contacted me about it.

“We have had nothing for the most part. No communication; no apologies; no explanation; no nothing. Our semester ended at spring break and that was it. They really just forgot about us.”

The university has held commencement ceremonies since 1897. They last held ceremonies at Wantland Stadium from 1963-1993 before moving it to Hamilton Field House, according to Nicole Willard, the assistant executive director of the UCO Chambers Library. Previous locations include the Old North auditorium, the now-demolished Old South auditorium, Mitchell Hall auditorium, and the Fine Arts amphitheater (which existed near the current music building).

UCO had first released plans for in-person graduation Feb. 24 after a full year of virtual ceremonies in 2020. Due to concerns of COVID-19, the initial plan was to allow graduating students to attend in person at Hamilton Field House, but without guests and faculty members. The university then amended the plan to include guests and move the ceremonies to an outdoor location April 1, following discussions with the UCO Student Association and the significant response from a Change.org petition that petitioned for limited guests.

In comparison, the initially planned Hamilton Field House has a capacity of 3,000 seats while Wantland Stadium has a capacity of 10,000 seats. Nobles said that the university “doesn’t anticipate that it will necessarily be more difficult to enforce [COVID-19] protocols at Wantland,” but campus police and volunteers will be prepared for it.