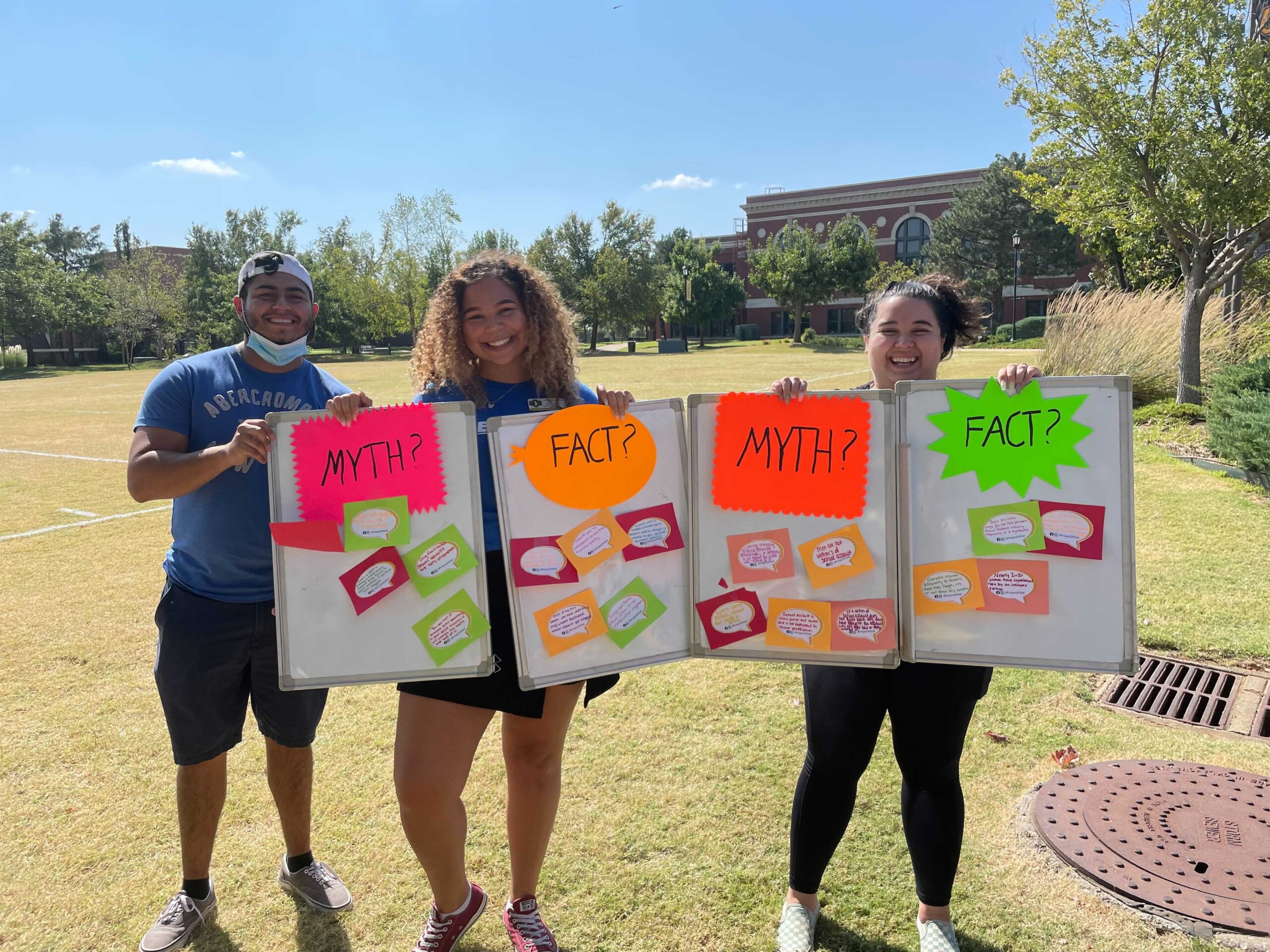 Substances impair the ability to consent and there are ways to identify and intervene if you witness sexual assault happening, speakers with UCO’s Project SPEAK told students at Plunkett Park on Wednesday.

“I just wanted to make sure with this program that I was going to hit on relevant topics for students, as well as making sure that I bring awareness and start to break the stigma and taboo topic that is sexual assault, let alone drug and alcohol facilitated sexual assault,” Octavia Walenciak, the UCO senior psychology major and health promotion peer leader who created the program, said.

The topic is relevant as one-half of all college students experience drug and alcohol facilitated sexual assault involving violent crimes and 13% of all students on campus will experience some type of sexual assault, according to the Association of American Universities 2019 Campus Climate Survey. Based on UCO’s estimated 13,000 to 16,000 students per semester, 13% is 1,650 to 2,080 students.

Drug and alcohol facilitated sexual assault occurs when substances are used to compromise a person’s ability to consent to sexual activity. RAINN’s website states the two main ways this assault occurs is when the perpetrator takes advantage of someone’s voluntary use of drugs or alcohol and when the perpetrator intentionally forces a victim to consume drugs or alcohol with or without their knowledge.

While many survivors have experienced the latter, this type of assault can take a variety of forms, especially among college students. These forms include: Coercion or pressuring someone beyond their comfort zone to ingest more drugs or alcohol or different substances than they are comfortable with; ignoring or refusing to help someone who says they’ve had too much to drink or is having a negative drug experience and needs help; initiating sexual contact with someone because they are intoxicated, and less likely to resist; Refusing to tell someone what is in their drink or the type of dosage of drug they are ingesting.

Walenciak emphasized the change of wording in Wednesday’s presentation from preventative to proactive since preventative comes off in a way that resources and tools have been provided when that’s usually not the case.

“You can’t really prevent horrible acts by other people, but we can try to be more proactive about what we’re doing when out with our friends, such as being an active bystander, or being more aware of our surroundings given the tools to know what to look for, Walenciak said. “I firmly believe that when you give somebody the tools to be educated, you are giving them the power to take action and do something about what’s going on in their community.”

The most proactive thing a person can do is be informed on consent. Walenciak said you want to respect people’s bodies, boundaries and their right to give or take away consent at their discretion.

“Consent cannot be given when they’re incapacitated and consent can always be taken away at any point, and, as the two people involved, it is always your responsibility to respect that they can take it away. If they can’t give you verbal consent, or even understand nonverbal cues, then there’s no consent.”

Consent is defined by Merriam-Webster as compliance in or approval of what is done or proposed by another. Colloquially, consent can be explained by a cup of tea, which Walenciak referenced during her presentation. The explanation originates from a 2015 video made by British police called “Tea Consent” and uses inviting someone over for tea as an analogy for sexual consent.

Other examples of this proactive behavior range from making sure the friends you go out with make it home safely or calling someone an Uber to the way you talk about and engage with sexual assault survivors.

“This is an issue that affects us all in many different ways,” said Maya Williams, guest speaker and UCO’s American Association of University Women vice president.

“It’s very likely that someone you know has experienced sexual assault and being aware of how we speak about it, how we speak to survivors about what’s happened to them is really important,” Wiliams, who is a sophomore special education- severe-profound/multiple disabilities major, said. “We never want survivors to feel guilty or ashamed of something they couldn’t control. I just want people to be aware of how we address it and who we seem to think is affected by sexual assault because this is not an issue that only affects women.”

Carlie Deatherage, assistant director for UCO’s Health Promotion/Outreach, said the main goal with Project SPEAK and the Health Promotion office is just giving students ways to access the education and resources they need while navigating college.

“Our goal is just trying to let students know that we’re here for them, we care about them, and ultimately want them to be safe so they can do what they came here to do, which is get their degree and get through school.”

Walenciak said if any students are having trouble, they are always on the third floor in Health Promotion, NUC, Room 402, as well as the Center for Counseling and Well-Being offices.

“If they want to get connected or involved, they can always shoot us a message on Instagram @UCOPHL @UCOProjectSPEAK or come up there and speak to somebody.”

For more information about Project SPEAK, you can find it on UCO’s website under the student resources section.