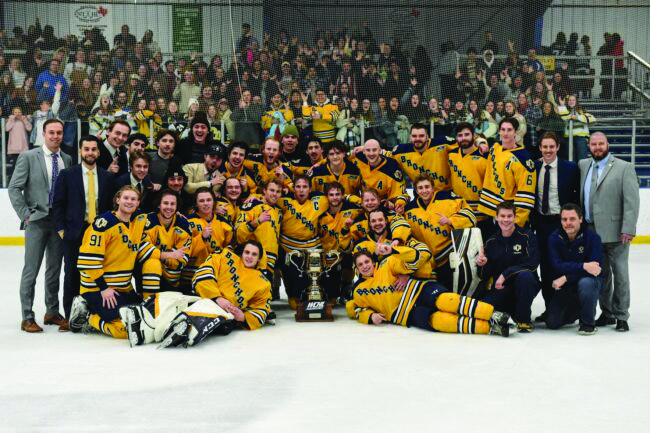 UCO hockey is a powerhouse, a force to be reckoned with, and under coach Michael Rivera, the team has climbed its way up the rankings to be one of the most successful hockey teams in the country.

The hockey program was founded by Craig McCallister, who played a pivotal part in the establishment of the Western Collegiate Hockey League in 2013, the league in which the Bronchos compete. McCallister led two teams to the ACHA Men’s D1 National Championships and three Western Collegiate Hockey League Championships. He retired in 2019, leaving the program with Rivera, who got started right away.

Following the pandemic, the Bronchos hit the ice and resumed their success, claiming their fourth WCHL championship and going all the way to the national finals.

“Growing up in Canada, it was very common to see kids learning to skate at very young ages,” said Cooper Krauss, a senior from Okotoks, Alberta, Canada, who started playing hockey when he was about 6 years old.

Before he started playing, Krauss grew up on skates. he said. Having dabbled in many other sports, Krauss decided to pursue hockey due to its competitiveness and benefits to his personal growth.

But he also decided to continue playing when found UCO. “My parents instilled in me the importance of school, so with that it made me want to play hockey along with getting a degree. I chose UCO because the coaches made me feel wanted and welcome. I talked to some other schools, but they didn’t seem to be as invested in me. I came down on a visit to the school and knew right away that it would be a good fit for me,” Krauss said.

Krauss is a leader on the ice, and as a senior, he wants to make his last year count.

“One big motivator for me this year is being a senior; it could be my last chance to play the game again, so I want to play my hardest every night for my teammates and myself,” Krauss said.

Despite the hard work, he said it is easy to enjoy himself when he is surrounded by his teammates.

“They really do become like family,” Krauss said. “We do have a lot of international players … the majority of our players come from very far distances. I think this helps us in the fact that we must come together to form these brotherly bonds. All our families are hundreds if not thousands of miles away, so we rely on one another heavily.”

Krauss said along with brotherhood, a big secret to their accomplishments are their team morals.

“One big key to our success would be our core values,” he said. “Our coach staff came up with four core values that we look to in the case of something not going our way. In doing so, we are normally able to solve what is going wrong through those four core values.”

With preseason coming to an end, Krauss said the squad is looking good.

“We haven’t played games against another team but through practices and inter squad games, the team looks very motivated going into the season,” he said. “With only losing four players, we only have four new players and the rest of the group is returning, so we knew we had something to prove this year,”

“This is another huge motivator for the team and me as we unfortunately were on the losing side last year. Now, this year, we want to be the ones celebrating.” he said.

“I want to leave the jersey in a better place than it was when I came in. By this, I mean that I want to help the program grow and the culture of the team to grow. Our program wants to make UCO known as a hockey school. So, the legacy I want to leave behind is to help that become true.”

UCO hockey faces off against University of Oklahoma Sept. 30 at Arctic Edge Arena in Edmond.