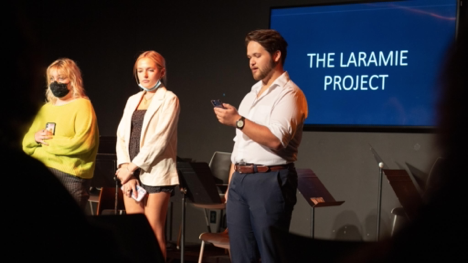 The story comes after Mathew Shepard’s murder in 1998 in Laramie, Wyoming.

Shepard, 21, college student was beaten, tied to a fence and left to die which led to anti-hate crime legislation, according to AP.

The project was set to debut at UCO last spring, however due to COVID-19, it was postponed to the current fall semester.

“We tried to get the Laramie Project on its feet before COVID-19, but we kind of had to wait and bring it back. So we’re really excited to debut it for everyone at UCO,” Elaina Price, UCO assistant stage manager.

It tells of the challenges that the town of Laramie faced in 1998 — continues to face — after Shepard was targeted for being gay.

The student directors had two weeks to hold auditions, cast, and rehearse the show.

“The actors are from all over,” Price said, “We have friends, people from outside majors, and people who don’t go to UCO to act in this performance. So it’s really a cool diverse cast.”

Each director was allowed to select their character track and decide how to direct it for the unusual table read presentation. Director for the character track of Andy Paris, Kolbie Umphrey said pulling the show together last-minute brought its own challenges.

“The biggest struggle was that we only got one legitimate rehearsal before our performance all together,” Umphrey said, “But getting to work with my actor individually helped me build a relationship with my actor and get to create the characters that I was looking for in my character track. Seeing how the actors have been able to come together so well has been pretty exciting to see.”

The directors of the performance provided statements about the production, which were displayed on a board in the back of the room along with a memorial display for Matthew Shepard. The display also provided information about the Matthew Shepard Foundation that was started by his parents after his death.

“I think performances like the Laramie Project, where it’s just a sit-down performance will get the message through about gay rights and hate crimes without a big production,” Stewart said. “I think it’s very interesting to be able to throw something together at the last minute. We didn’t get a lot of time to rehearse, but we’re still able to bring art and performances without a huge rehearsal process.”

The Laramie Project remains one of the most performed plays in America, according to AP.Other table readings are set to be brought back to UCO for future semesters.

“This performance has been pretty successful in production,” Price said, “ We’re excited about it so I definitely think next fall and spring we will put on more staged table reads because it’s been a really interesting different aspect of theater that isn’t done very often.”