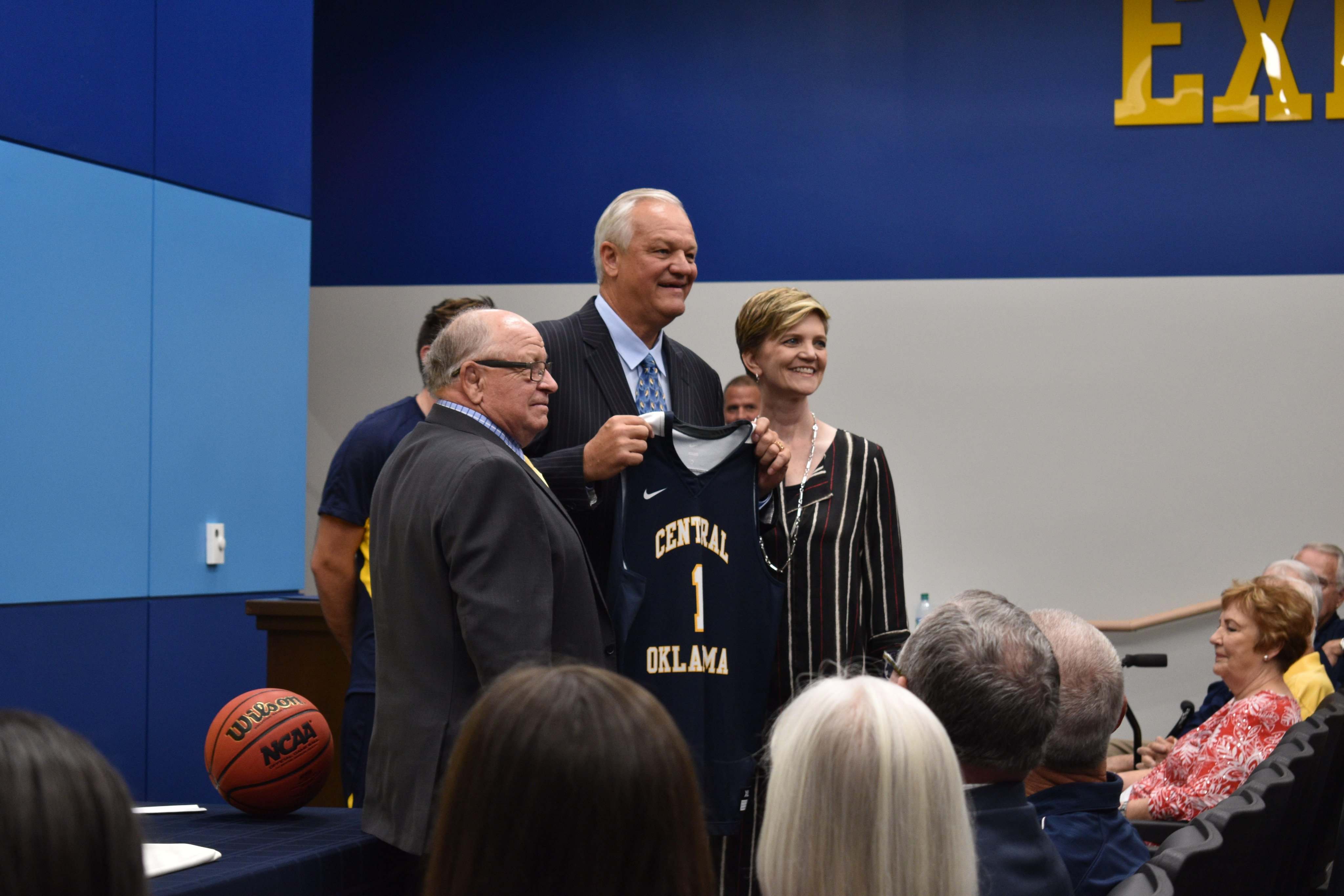 The University of Central Oklahoma athletic department introduced Bob Hoffman as the new men’s basketball coach at a press conference in the Stampede Clube Theatre at the Sports Performance Center on August 5.

“This is an exciting day for UCO,” said President Patti Neuhold-Ravikumar. “The future of our men’s basketball program looks brighter than ever and we’re proud to welcome a new member to our Broncho community that will continue the tradition of the team and student success.”

“We’d like to thank Tom [Hankins] and his family for being part of our family over the past four years,” UCO Athletic Director Eddie Griffin said. “Tom is a great person off the court and was a great coach on the court. He did everything the right way. We wish him and his family the best in their future.”

During Hoffman’s coaching career, he won a National Association for Intercollegiate Athletics women’s national championship with Southern Nazarene University in 1989, spent some time coaching at his alma mater Oklahoma Baptist University, head coached American Basketball Association and D-League teams and was an assistant coach under Kevin Sampson at the University of Oklahoma.

“We are really excited to welcome coach Hoffman and his family to UCO,” Griffin said. “Bob’s stellar resume speaks for itself and he is just a great person too – the kind of guy that belongs at UCO. We’re excited for him to get started. I think great things are in store for the Bronchos.”

“I’ve been fortunate to do that some with great people and I talked to some NBA folks and scouting,” Hoffman said. “But there’s nothing like coaching a team and trying to prepare a team to try to do something they can’t do by themselves. I had talked to some other people about some head coaching jobs, it just hadn’t worked out. So, this was just a tremendous opportunity.”

“It was a special place and those people gave us a great opportunity,” Hoffman said. “I’m not sure all the details of why. In Kelly and I’s world, we believe somebody far greater than them let me go…but we were able to be a part of and spend important moments and times that we would never get back.”

While in the Atlantic Sun Conference, Hoffman coached the Bears to a 2014 NCAA Tournament appearance as the 14th-seed, where he was able to upset No. 3-seed Duke University, 78-71.

Hoffman said he was thrilled about the victory over Duke, but he thinks about the loss to the University of Tennessee in the next game of the tournament the most.

“[People] would tell us where they were when it happened or where they watched it; I got to hear all those stories and they were fun,” Hoffman said about the Duke upset. “But for me personally, I love that moment but I thought we should have beat Tennessee. And so that’s the coach in me.”

Hoffman is an Oklahoma native who played basketball at Putnam City High School where he won a state championship in 1972. He began his college career at Oklahoma Baptist University in Shawnee, where he scored 1,017 points, which ranks him as the 47th all-time leading scorer in OBU history.

During his time as a player at OBU, Hoffman said his senior teammate at Putnam City, Terry Anderson, came to play at UCO and was the top 20 all-time leading scorer, so his best games are in the Hamilton Field House because he wanted to beat him so badly. Anderson played at UCO from 1975-79 and scored 1,248 points.

After graduating, he accepted a job as a head coach at Piedmont High School. While there, he also obtained his masters degree in education in 1985 from UCO.

“The full circle is beyond what you can imagine really and not many people get to experience that kind of thing,” Hoffman said. “My wife and I’s first apartment was 600 yards from [the Performance Center]. Our first year of marriage, our very first day of marriage we could see the goalpost.”

Hoffman is the first coach in NCAA history to win a tournament game in all four Division I postseason tournaments in a four-year span.

Hankins took over the head coaching job in the spring of 2015 and won 64 games over his four seasons as the coach. In three of the four seasons, he led the Bronchos to the Mid-America Intercollegiate Athletics Association Postseason tournament.

UCO has won over 1,300 games, advanced to 22 conference or division championships and made 17 national tournament appearances in its history.

“What an amazing community – Oklahoma City is great but Edmond is off the charts and so the chance to live here, work here, be a part of this place,” Hoffman said. “I think there’s so many things I think we can do and work with so many great people that live here.”