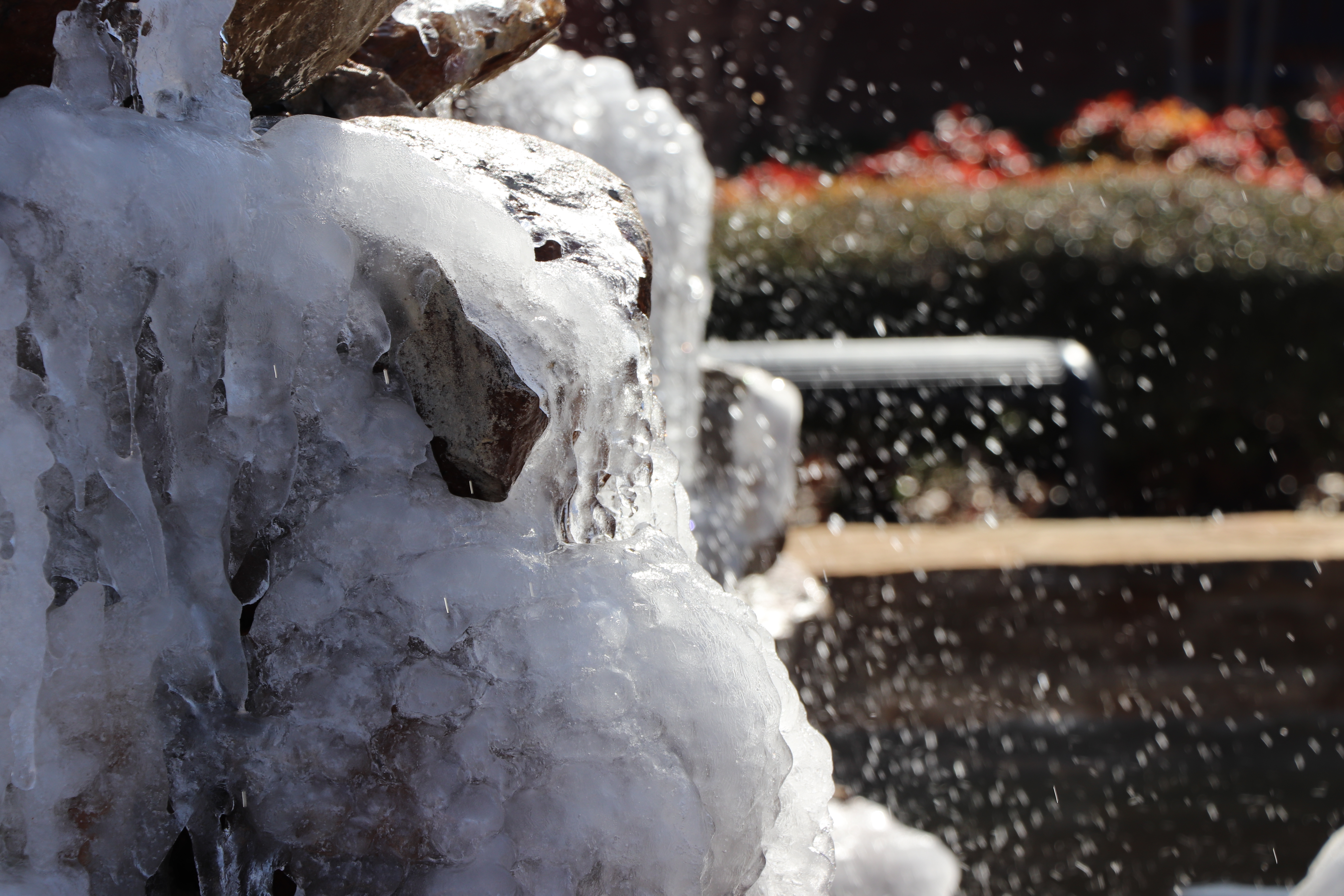 A water fountain is seen partially frozen outside of Old North on Jan. 26 at the University of Central Oklahoma. (Sarah Lauffenburger/The Vista)

As the University of Central Oklahoma has closed three times and delayed opening once in the last month due to inclement weather, students have expressed frustration over social media regarding the process by which the university decides to close campus.

According to Adriene Nobles, assistant vice president for University Communication, the president makes the decision on all campus closures.They base the decision and its timing on current conditions, weather forecasts, information from UCO staff including Public Safety and Facilities Management, other campus and school district responses to conditions and in consultation with others as may be needed.

“The factors that are really important is can the campus conditions be brought to a safe condition in time for our staff and our students to come to work and enter into class,” said UCO President Don Betz.

“An important variable is personal judgment based on the conditions you have where you are,” Betz said. “Your individual safely begins with a personal decision.”

Betz said that when the weather turns bad, he and other staff start to connect with each other at around 4 a.m. and try to make the decision by 5 a.m., which will allow students and faculty to have enough time to adjust their schedules. They also monitor the weather overnight to have an overall look at the condition.

“The idea is to make it to the decision as early as possible with as much information as you possibly could have so you can make an accurate decision,” Betz said.

Betz said Norman Nieves, director of UCO Emergency and Management services, will get in touch with weather stations locally and nationally to get an accurate forecast.

“It’s very hard to predict the weather in Oklahoma any time, but especially hard to do so in the winter and that’s because conditions change so dramatically,” Betz said.

UCO Police Chief Harp contacts other schools in the metro areas while Fred Fieth, UCO facilities manager, will make sure the staff salts and cleans the sidewalks and parking lots.

“We make our decisions independent of others, but their perspectives are useful for us to review,” Betz said. “There has not been a circumstance in recent years where all of our fellow universities in the region closed, and we remained open, though the exact timing of the closures may vary.”

On Feb. 27, there were 26 wrecks reported to the Edmond Police Department, according to EPD Public Information Officer Jennifer Wagnon. The Oklahoma City Police Department posted on their social media that there were at least 46 injury accidents that morning.

While around 60 percent of UCO students commute to class, Betz said that around 4,000 to 5,000 students and faculty live on campus or close to campus that walk to school. He said the crews usually start to clean the sidewalks and parking lots early in the morning before most others get up. Betz and other staff also monitor the road conditions when they drive to campus.

“The institution makes decisions, not on the worst-case scenario for the student live the furthest away, but on what safety factors we have in mind to make sure that the campus is functional,” Betz said.

The university also encourages students to contact their instructors and professors if they do not feel safe going to class. While many students express that some professors do not accept weather as an excused absence, Betz said he have discussed the issue many times with the faculty.

“I know there’s always going to be exceptions and it’s never going to be perfect, but the faculty are strongly encouraged to appreciate the safety concern,” Betz said. “I do understand this issue and we will continue to have discussions with the faculty senate executive next week.”

As stated on UCO website, UCO does not follow public school systems. While public schools build snow days into their annual schedules, UCO does not extend the school year when days are lost. The loss of class period affects academic programs at the university, therefore universities are less likely to close for inclement weather conditions.

The Oklahoma City Public School District has a policy that a temperature of 10 Fahrenheit degrees, or a wind chill of five Fahrenheit degrees or below, would prompt administrators to close schools for the day. On Mar. 4, the wind chill in Edmond was minus 1 Fahrenheit at 11 a.m., according to the National Service Weather website.

“OKCPS has a wind chill review threshold because of the students waiting outside for buses; not an issue for us,” Betz said. “No other universities in the metro region have closed [Mar. 4] due to the low temperatures. Universities are a more accurate frame of reference for us at UCO as they also serve adult learners not bussed to the institutions as happens in the school districts.”

Betz said the university usually closes campus during the breaks between classes and they monitor to know how many students are at school at each hour. He said students can contact the Office of Academic Affairs or himself if they have any questions about the closing decision.

Nobles said based on university reports, since 2016 there has only been one delayed opening, one complete closure and seven early closures, with six for winter weather and one for severe spring weather.