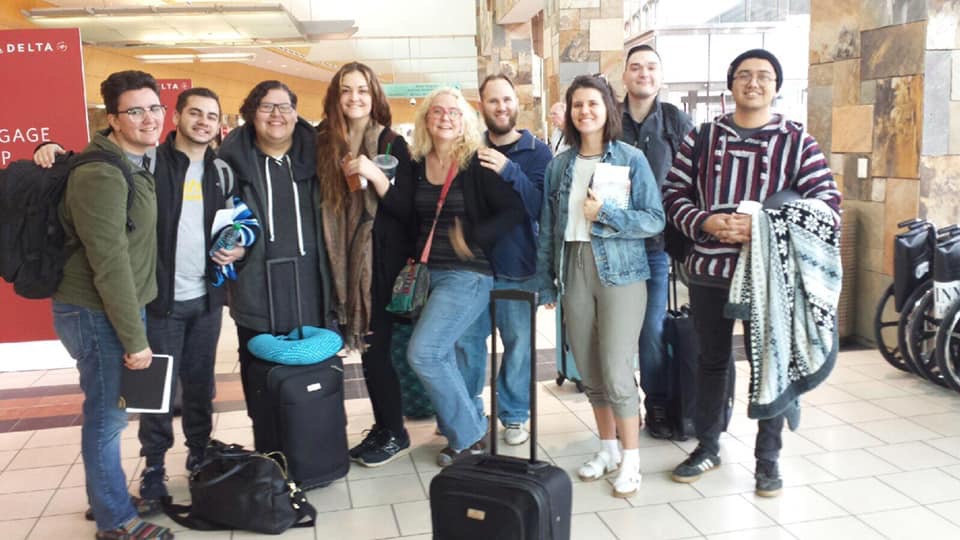 Students from the University of Oklahoma prepare to catch a flight to India to attend a conference on Mar. 7 for Gender Issues in the New Millennium. (Provided/Asheley Middleton)

The Women’s Research Center and BGLTQ+ Student Center at the University of Central Oklahoma is co-hosting a conference in Varanasi, India on March 7 over Gender Issues in the New Millennium.

“This is truly an international conference; participants from India and the U.S. will be discussing specific gender issues in their own countries and how to collaborate,” said Lindsay Churchill, director of the Center.

The Women’s Research Center and BGLTQ+ Student Center have been planning the trip since October 2018, when a professor that attended one of their conferences at UCO asked to collaborate.

“One of the people that connected me this group in India was a professor who had connections to Banaras Hindu University,” Churchill said. “He attended the 3rd International Gender and Sexuality Studies Conference in October 2018 and enjoyed our conference so much that he told his colleagues about this and we decided to collaborate and create a conference together.”

Jennifer Phillips, a graduate student at the UCO, is one of the seven students attending and presenting her work at the conference in India.

“My presentation is [on] the history of human sex trafficking in the U.S.,” Phillips said. “It’s been kind of tricky to talk about the history of something that’s kind of  a black-market thing.”

Phillips is currently working on getting her master’s degree with a focus on human trafficking in the Western hemisphere.

“I’m…talking about the laws we’ve put in place, how to help children because a lot of human trafficking has to do with child trafficking,” Phillips said. “[I’m also] talking about the money, the programs and organizations that are out there to help people that aren’t just local, but worldwide as well.”

Phillips will give her presentation on March 7 and on March 9 at another meeting, where Churchill will be giving a keynote speech about the future of women’s studies.

“It’s such a good group of people that are going to this and they are just excited,” Phillips said.

Jakey Reavis, Andrew Hedges, Marco Salas, Asheley Middleton and Joshua Arbital are the other six students who will be attending the conference, as well as presenting their own work.

“Josh has done a wonderful job working with the Center as a Sexual Health Ambassador, as well as a researcher (in collaboration with OU medical students) about diversity in the medical field,” Churchill said.

Banaras Hindu University has a vibrant women’s studies community and feminist activist community, according to Phillips and Churchill.

“I hope to have an exchange with other students and scholars about their gender programs and how they compare to what we are doing in Oklahoma,” Churchill said. “I also am excited to learn from scholars in the field of Women’s and Gender Studies.”

There is already talk about next year’s trip, according to Phillips. However, Phillips said she is excited to experience the culture and take in as much as she can for now.

“I am honored that our students and the Women’s Research Center and BGLTQ+ Student Center can be a part of this and co-sponsor such an event,” Churchill said. “These discussions are critical and having them in India will teach us so much.”