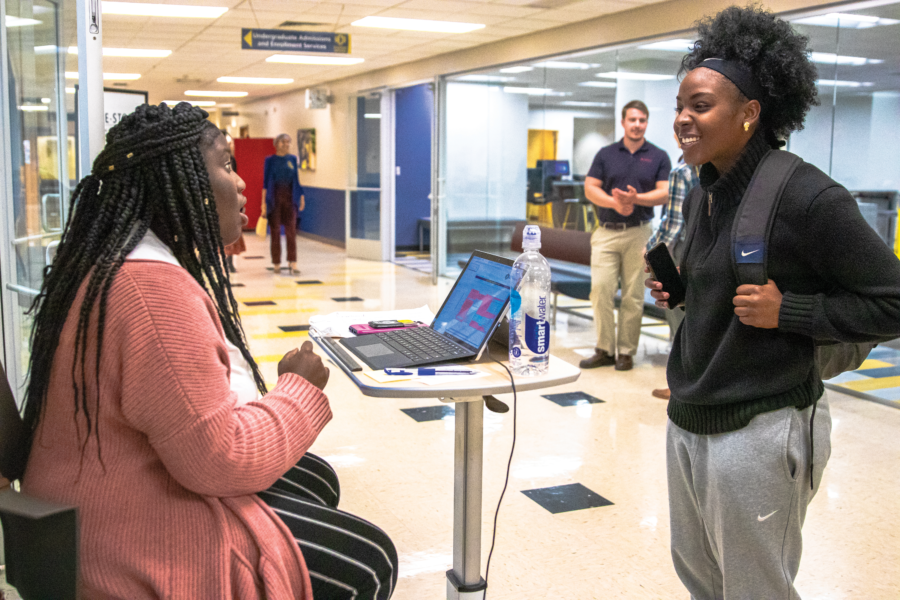 “Our annual planning and decision-making efforts have historically started too late in the year to make time for the broad and inclusive conversation that we’d like to encourage,” Neuhold-Ravikumar said at the forum. “And that’s a point that can be resolved with forethought.”

The Alignment and Allocation effort will create a plan that represents the goals of the entire campus community by bringing together a task force made up of students, faculty and staff, according to Neuhold-Ravikimar. Barthell added that the process should create regular open conversation on campus.

The aim of the task force’s efforts will be to “[empower university] leaders to respond nimbly to opportunities and threats in the education industry and in our state,” Neuhold-Ravikumar said.

In her initial Alignment and Allocation announcement, Neuhold-Ravikumar expressed concern for a slump in enrollment that diminishes the university’s financial abilities.

Since 2012, university undergraduate enrollment has decreased by 12.6 percent. This number, paired with decreasing state appropriations, affects the process by which the vice president for Finance and Operations creates the annual budget, according to Barthell in an interview.

“Each year the Division of Academic Affairs is consulted in order to help predict the following year’s enrollment number as total credit hours,” Barthell said.

Credit hours directly impact the calculation of the following year’s budget. University students are enrolled in 14,794 less credit hours in fall 2019 than their counterparts in fall 2012.

In current undergraduate tuition and fees, this equates to a loss of about $3.82 million.

Freeman said during the forum that university enrollment has not reached levels this low since 2001.

“We’re certainly not the only institution facing this challenge; it has been both a regional and a national trend,” Freeman said. “A number of factors we believe are contributing to this trend – some of them out of our control, some of them we may have influence on.”

According to data obtained from the Oklahoma State Regents for Higher Education website, UCO is one of only three public schools in the state that reduced its budgeted expenditures from FY19 TO FY20. Additionally, OSRHE data shows that state funding for higher education has continually decreased for the last several years by as much as a quarter.

Angela Caddell, associate vice chancellor for communications for the OSRHE, said that the process the regents use for allocating funds follows a specific timeline and procedure.

“Individual institutional allocations from the State Regents reflect the institution’s base appropriation (how much an institution received the previous year),” Caddell said.

Caddell added that the regents reevaluate state universities annually and offer increases in appropriations as incentives based on performance factors. These factors, according to Caddell, include raising retention rates from freshman to sophomore year and degree completion rates.

“Since state-appropriated funds represent less than 25 percent of our annual revenue, we are increasingly dependent on tuition and, therefore, any decline in enrollment has a strong impact on our overall budget,” Barthell said.

“Since state-appropriated funds represent less than 25 percent of our annual revenue, we are increasingly dependent on tuition and, therefore, any decline in enrollment has a strong impact on our overall budget,” Barthell said.

While Barthell mentioned that the university works to avoid increases in tuition in fees, costs have gone up by 33.5 percent since FY 2015, according to Freeman.

Decreases occur based on reduced state funding for higher education.

While facing challenges created by dropping enrollment, UCO is still at work trying to find solutions that work for everyone.

Adrienne Nobles, assistant vice president for University Communications, said a two layered recruitment and retention strategy aimed at increasing enrollment is one part of the plan.

Nobles added that one of the newest recruitment strategies is UCO’s auto-qualification scholarship program.

“Students may qualify for additional scholarships, but the idea here is to let them know earlier what kind of assistance they can get at UCO,” Nobles said.

Nobles and Barthell agreed that when it comes to retention, students who come to UCO need to be equipped with the tools to stay enrolled.

“Our retention efforts center on removing barriers for current UCO students,” Nobles said. “Our goal is to help students who start at UCO finish at UCO.”

Ultimately Barthell noted that the university’s fiscal decision-making is a collaborative effort between numerous entities. The process is an effort to offer transparency and inclusion to as many members of the university community as possible.

“In addition to discussions in the President’s Cabinet, the University Planning Committee meets with cabinet members, deans, faculty and staff senates, and UCOSA representatives each month in order to share ideas about how to address fiscal concerns,” Barthell said.

During the forum, Barthell said that reexamination of how to allocate resources in a university can be done based on a number of criteria. The Allocation and Alignment effort will review each area of the university to determine those areas in need of more funding and those with funding to give, according to Barthell.

UCO has had to close a gap every year and that means cuts are inevitable, Barthell said. But the new process is designed to allow for better management of funds.

“Right now, we’re trying to recover from a $12 and a half million loss that we sustained during tough times in Oklahoma,” Barthell said. “We have a long way to go, and so until we get there, we need to develop a mechanism where we can look fairly across campus.”

Freeman said that while many areas have been used to offset budget deficits in the past, some of them are not sustainable.

“Our current fiscal environment requires our ability to ensure resources are being allocated in ways that provide the greatest impact,” Freeman said.

For more information on the university’s fiscal allocation and alignment plan, contact the Budget Office at 405-974-2555.