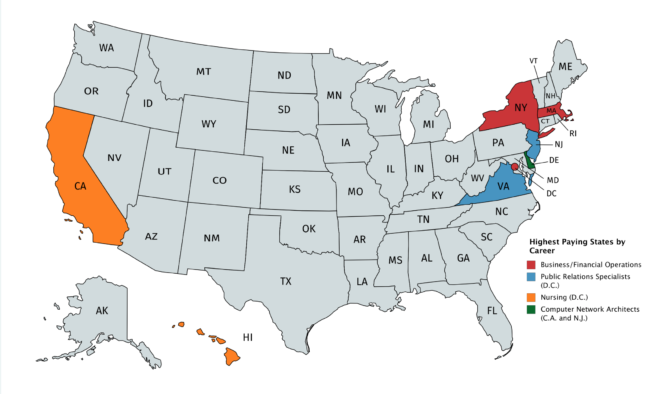 Undergraduate students at the University of Central Oklahoma have the option of varying degree programs and majors, each leading to a diverse job market.

The future growth and decline of major industries directly affects and correlates with soon-to-be graduates and the available workforce.

The five undergraduate colleges at UCO ranked from highest annualized degrees between 2014-2019 are College of Education and Professional Studies, College of Business, College of Liberal Arts, College of Mathematics and Science and College of Fine Arts and Design.

The national median annual wage in 2017 for a bachelor’s degree was $72,830, according to the Bureau of Labor and Statistics.

Students can look to popular majors and projections to reflect the job market they will face upon graduation.

Through analysis of the most recent data, 2014-2019, published by UCO’s Institutional Research Center Factbooks, the most popular degree and majors can be determined.

The most popular CEPS program for the last five years was a B.S. in general studies. However, the psychology program has steadily grown in popularity in the same period, according to the Factbooks.

Rachel Baugh, communications and public relations coordinator for the CEPS, said the general studies degree is popular due to the variety of exposure students have with all five colleges.

“Their degree plan is not limited to any one college, so they get real life experience with the material that could be expected of them at any point in essentially any job market,” Baugh said.

Baugh said general studies is a multidisciplinary undergraduate degree program suited for returning students or students pursuing a broad range of study. The degree is applicable through a wide range of career options and can easily boost earning potential by furthering the degree with certificates and career field experience.

At the COB, 15 undergraduate business degree programs are offered through six departments. These programs fall under two degrees: Bachelor of Science and Bachelor of Business Administration.

The most popular COB program for the last five years is a B.B.A. in finance, according to the Factbooks.

The two most common careers with a finance BBA are financial analysts, with a 2018 median annual wage of about $85,660, and financial examiners at $80,180.

Employment as business and financial operations, by state, in May 2018 saw the highest paying in the District of Columbia, New York and Massachusetts.

The most popular CLA program for the last five years is a B.A. in strategic communications, according to the Factbooks.

An example of employment with this degree is public relations specialists. There is a projected to growth of 6% from 2018-2028, matching the average projected occupational growth, the median pay for 2018 was $60,000 per year.

The use of social media is expected to create opportunities for public relations specialists as they attempt to appeal to consumers and maintain a reputation and visibility for their organizations. Top paying states for the occupation are District of Columbia, Virginia and New Jersey.

The most popular CMS program for the last five years is a B.S. in Nursing, according to the Factbooks.

Generally, registered nurses with a BSN will have better job prospects due to the demand for healthcare services because of the aging population’s chronic conditions, such as arthritis, dementia, diabetes and obesity.

The bureau job outlook for registered nurses is projected to grow 12% from 2018-2028, the median pay for 2018 was $71,730 per year. Top paying states for the occupation are California, Hawaii and the District of Columbia.

The most popular CFAD program for the last five years is a BAT in Technology Application Studies, according to the Factbooks.

One of the most popular jobs for the career field of technology application studies is a form of computer programming.

With an employment growth projection of 12% from 2018-2028, this degree plan has a faster growth than the average for all occupations, the median pay for computer and information technology occupations for 2018 was $86,320 per year.

For example, computer network architects have a growth projection of 5 percent from 2018 to 2028 and the median pay for 2018 was $109,020. Employment in the computer and information technology field is projected to grow by 13 percent between 2016 and 2026, according to BLS.

The overall success of students in the projected job market will vary with the major and overall degree plan. The BLS Occupational Handbook online is available to students interested in further investigating their specific intended career field and job market.