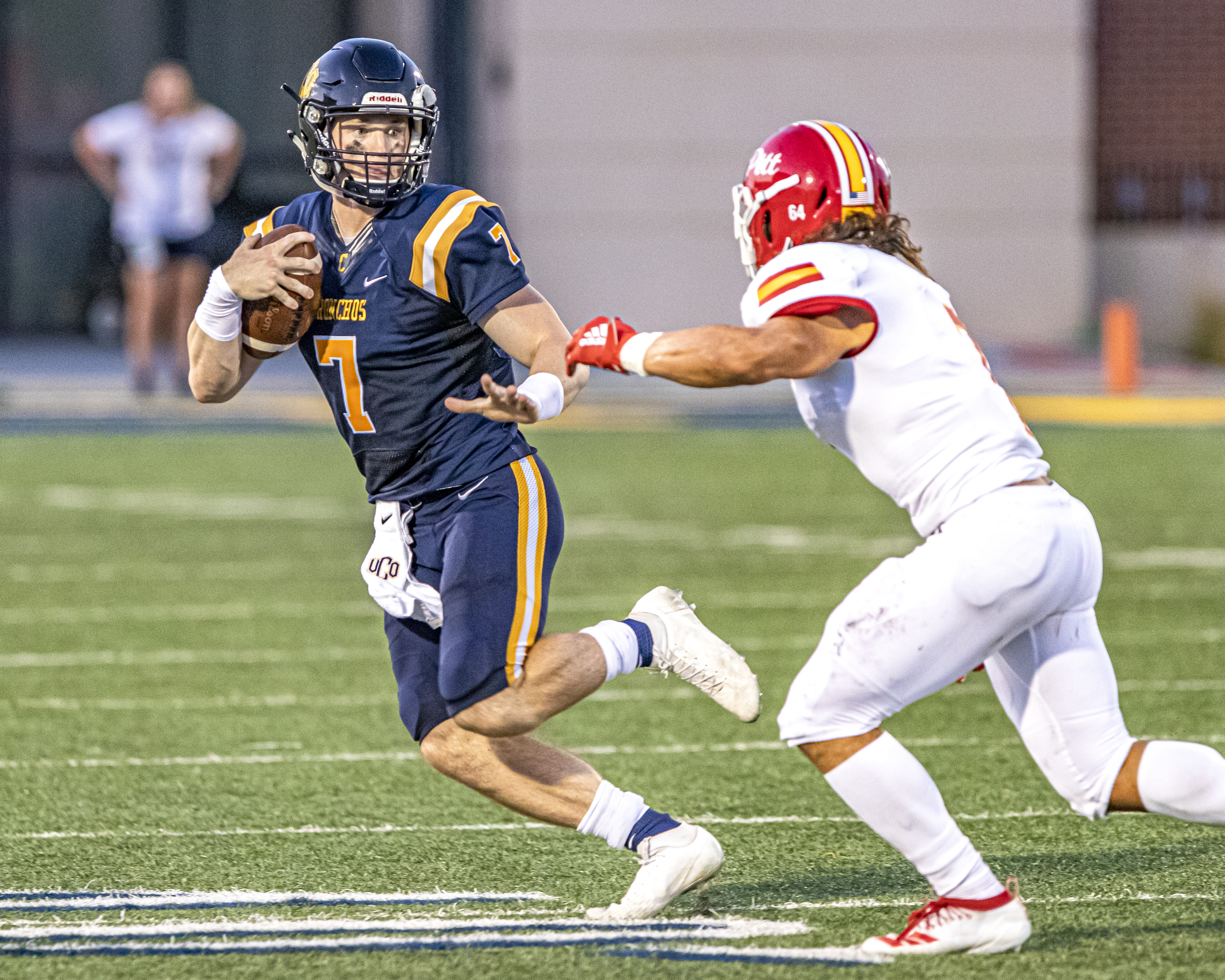 Will Collins, left, carries the ball during the 2019 football season opener between the Central Oklahoma Bronchos and Pittsburg State Gorillas on Sept. 5 at Wantland Stadium. (Tanner Laws/The Vista)

“The game comes down to you got to start,” said head coach Nick Bobeck. “That’s the game of football, there’s got to be four quarters played. There’s going to be a lot of people that want to say ‘could of, should of, would of,’ and all those type of things, but at the end of the day you lost the game.”

Pittsburg State has defeated UCO 11 of the 16 times the teams have played; the two have also tied once. Last season, the Bronchos lost 21-7 to the Gorillas.

On Thursday, Pittsburg State kicker Jared Vincent kicked the game-winning field goal from the 3-yard line. This gave the Gorillas the victory after the offense drove 67 yards down the field on 11 plays, their only successful drive of the second half.

“The deal is, we didn’t start fast and we weren’t playing physical in the first half,” Bobeck said. “The kids made a decision that they wanted to play hard and when you play hard, you have an opportunity to have success, but we put ourselves in too big of a hole.”

Going into the half down 34-7, UCO defense forced and recovered four fumbles and recorded five consecutive stops in the second half to eventually take the lead, 35-34, with 3:20 to go.

“[Turnovers are] one of our plans for success,” Bobeck said. “It’s one of the six things that we emphasize. You have to win the turnover battle; the first half we didn’t, the second half we did. When you turn people over, you have a chance to put points on the board and get them off the field.”

The fumbles were recovered by Christian Maloy, Drequan Brown, Stephon Starks and Dillon Hall, who returned his for a touchdown.

“I was proud of our guys for bowing their neck and doing it, but we’ve got to learn how to push buttons as coaches a little bit better and get them to start faster,” Bobeck said.

The game started with the Gorillas’ Lorenzo West returning the opening kickoff 101 yards for a touchdown.

UCO countered with a five-yard touchdown run by quarterback Will Collins, but that would be the final score for the Bronchos in the first half. PSU opened their offense up, scoring on every drive and raking in 34 points while successfully running the triple-option and spread offense.

It was the second half where UCO’s offense came alive as they scored 21 straight points.

T.J. Roberts earned player of the game for the Bronchos as he recorded nine carries for 79 yards, four catches for 56 yards and a 35-yard touchdown run where he broke three tackles.

“T.J.’s an exceptional player,” Bobeck said. “He’s got [a] really good center of balance and has an understanding of what to do when the ball’s in his hands. He’s just a natural runner. We’ve known this all the way back to the spring. He’s a different kid.”

Collins finished the game throwing for 212 yards, 14-24, two touchdowns and one interception.

Bobeck said in order to obtain the fast start that they want, the Bronchos will need to have leadership.

“Coach-led football teams are good, but they’re not great,” Bobeck said. “It can’t be coach led, we’ve got to have some players to step up and go and that’s as candid as I can be. We’re talented, that’s not hard to see.”