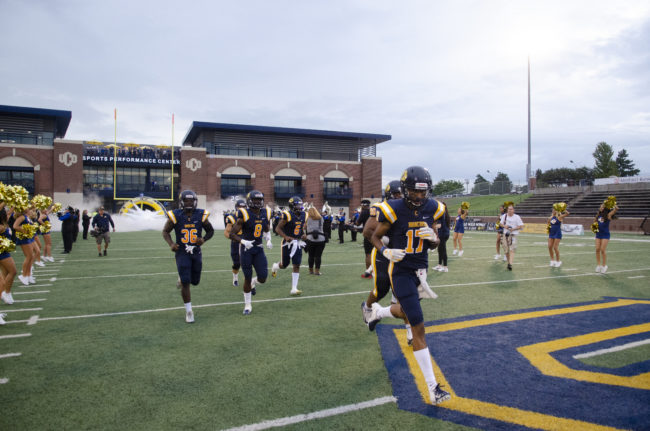 The University of Central Oklahoma football team is coming off an 8-4 season, winning six of the last seven games, including their win against Angelo State University in the C.H.A.M.P.S. Heart of Texas bowl, 41-34.

UCO is coming off two back-to-back eight and four seasons, both ending in bowl game victories. The Bronchos have played in four bowl games in the past five years and are one of the winningest Division II programs in the nation.

For the second consecutive season, the Bronchos will start against the Pittsburg State University Gorillas. The game is set for Sept. 5 at 7 p.m.

Pittsburg State posted an 8-3 regular season record in 2018, giving them the third best record in the Mid-America Intercollegiate Athletics Association, one spot ahead of the 7-4 Bronchos.

While the two teams had nearly identical records, the only difference was PSU getting the best of the Bronchos with a 21-7 win in 2018’s season opener. This was the second lowest scoring game for the Bronchos in the 2018 season.

The Bronchos offense struggled in the first half against the Gorilla defense in the previous season as UCO posted a three and out on the first three possession. After running just four plays on the fourth possession, they went three and out again on the next drive. They finished the first half on just 26 plays, earning four first downs and 61 yards of offense.

Selemaea recorded 50 tackles, 10 tackles-for-loss, 4.5 sacks, one interception and six pass break-ups in the 2018 season. Thomas, who started all 11 games for the Gorillas in his junior season, recorded 41 tackles, 19 on his own, a team leading 13.5 tackles-for-loss and six sacks. Dodd assisted on the offensive line in his junior year as the Gorillas finished the 2018 season ranked 20th nationally in rushing.

The Bronchos will look to avoid a second season dropping the season and home opener. The most recent victory UCO had over Pittsburg State was on November 14, 2015 as they topped the Gorillas 41-39 in the final game of the season.

UCO will then travel to Nebraska on September 12 to try an avenge a heartbreaking 31-27 loss against University of Nebraska-Kearney.

The Bronchos had a chance to win it late on the final drive but UCO quarterback Keats Calhoon was unable to connect with Dustin Basks, who had 11 catches for 136 yards that night.

Despite the last offensive play for the Bronchos, head coach Nick Bobeck pointed out other openings the Bronchos had that they did not take advantage of that decided the game.

“There were multiple opportunities for us to separate where we didn’t separate,” Bobeck said. “Ball security is huge in football games like that. We had an opportunity to score a touchdown and we had to kick a field goal. It’s not one thing, it’s a combination of things that get you beat.”

UCO kicker Alex Quevedo was 2-2 on the night, connecting once from 30 yards out and then again from 31. The first field goal came on the heels of a kick return that gave the Bronchos first and 10 at the Lopers 28-yard line, and the second on a 14 play, 61-yard drive that resulted in a dropped pass in the endzone.

The Lopers finished in eighth place, four spots below the Bronchos, in the MIAA in the 2018 season as they finished with a 5-6 record. Nebraska-Kearney finished ahead of UCO in a majority of defense categories. In total defense the Lopers only allowed 327.8 yards per game while UCO averaged 356.9 yards.

Nebraska-Kearney will return two seniors who earned 2018 first-team All-MIAA honors: inside linebacker Sal Silvio, who currently has 234 tackles; and running back Darrius Webb, who had a 998 yard rushing season and led the MIAA in rush average per game with 90.7.

The Lopers will also return 2018 second-team All-MIAA honorees safety Dallas Vaughn, who recovered three fumbles returning one for a touchdown, and wide receiver Montrez Jackson, who recorded 18 catches, 397 yards and one touchdown in 11 games.

The Bronchos will return home to battle the Lincoln University Blue Tigers who recorded a 3-8 record in the 2018 season.

As Lindenwood University left the conference and joined the Great Lakes Valley Conference, Lincoln decided to return to the MIAA in for the 2019 season. The MIAA accepted to get back to 12 teams.

Lincoln will be leaving the GLVC. In their five years with the GLVC, the Blue Tigers won just three conference games, posting an overall record of 3-35. From 2015-2018 Lincoln lost 29 straight conference games before defeating the Southwest Baptist University Bearcats 28-13 in a home game on Sept. 22, 2018. In the 2018 season, the Blue Tigers posted two wins in conference play, their most ever.

The Blue Tigers posted an overall record of 9-45; 75 percent of their wins came by non-conference opponents. However, joining the MIAA has left the Blue Tigers without the ability to host a non-conference schedule because the MIAA holds 12 teams, whereas the GLVC held eight. Lincoln has played a game with other historically black colleges and universities at least once every year since 2013, but will not be able to schedule any this year.

UCO and Lincoln have only played a common opponent in one season and that was Southwest Baptist in 2012. Both teams lost to the Bearcats.

The middle of the schedule for the Bronchos will be an eventful one for sure.

The Bronchos will face Northwest Missouri State University on Sept. 28 at the Bearcats home in Maryville, MO.

The Bronchos beat the Bearcats for the first time last year since joining the MIAA in 2012 and look to do it again.

The Bearcats will be celebrating family weekend as Bronchos hope to make it a bittersweet day for NWSU.

The next week, Oct. 5, the Bronchos will face off against the defending Mid-America Intercollegiate Athletics Association champions Fort Hays State University.

Fort Hays State has won the last four meetings between the two teams and the Bronchos look to end that streak in the homecoming matchup.

The Tigers have outscored the Bronchos 110-73 in the past four meetings. The last win for the Bronchos came in 2014 when they won 26-7 to open up the season.

Starting quarterback Will Collins will return for his junior year at UCO and will certainly be looking to avenge last year’s shutout loss to the Tigers.

After celebrating their own homecoming, the Bronchos will head to the University of Central Missouri on Oct. 12 to face the Mules for a homecoming of their own.

The Bronchos are 2-5 against the Mules since entering into the MIAA in 2012. UCO has won the last two meetings between the teams, including last year’s 33-26 win.

The Bronchos defense will hope to have an answer for CMU’s running back Devante Turner. Turner rushed for 116 yards and scored three touchdowns last year against UCO.

UCO’s quarterback Will Collins and running back Clay McKenzie combined for 475 yards in the meeting between the two. With McKenzie graduating, the Bronchos will most likely look to sophomore Saboor Daniels to carry the load on the ground.

The 10th and 11th games could prove to be make or break for the Bronchos if the rest of the season doesn’t go as planned. Capping off the season with big wins against Northeastern State University and Emporia State University could be huge for UCO’s morale heading into what could be a bowl appearance, or better yet, send them bowling.

Last season Northeastern proved to be no match for the Bronchos, with Central winning 62-0, their largest win difference of the year by far. UCO amassed 581 total yards in the contest, scoring eight total touchdowns.

On top of their terrific offensive performance, the Bronchos held the Riverhawks to just 159 total yards in their third and final shutout of the season. Langston Underwood led the way with six total tackles, with Kahewai Kaaiawaawa and Dillon Hall close behind with five each. Central also intercepted the ball three times.

Barring an unforeseen meltdown from the Bronchos and an incredible jump from NSU, it will be hard for the gap to shorten that much in just one year. It’ll be hard to bet on the Riverhawks for a while, who went 0-11 in the 2018 season, with their worst loss of the year coming to UCO. If the Bronchos can take care of business on both sides of the ball, Week 10 should be a good momentum boost heading into their final game of the season.

The last game of the season should prove to be much more interesting for the Bronchos, as they play the Emporia State Hornets, who narrowly defeated UCO in a heartbreaking 35-28 thriller in the final 2018 regular season game.

Players like Daniel Baughman and O’Shay Harris will be key players in the final game of the season. Harris was one of two players to earn All-American honors last season, and will be returning for his senior season. He primarily played safety, but has shown he has the ability to play cornerback as well.

Baughman, a defensive back who played in all 12 games for the Bronchos in 2018 as a redshirt freshman, will look to show huge improvement in his sophomore campaign. Alongside Harris, the two could be a nightmare for opposing quarterbacks in the upcoming season.

With more experience in the secondary, and what could be an even better offense, UCO should be the team to beat in the matchup versus Emporia State this year.