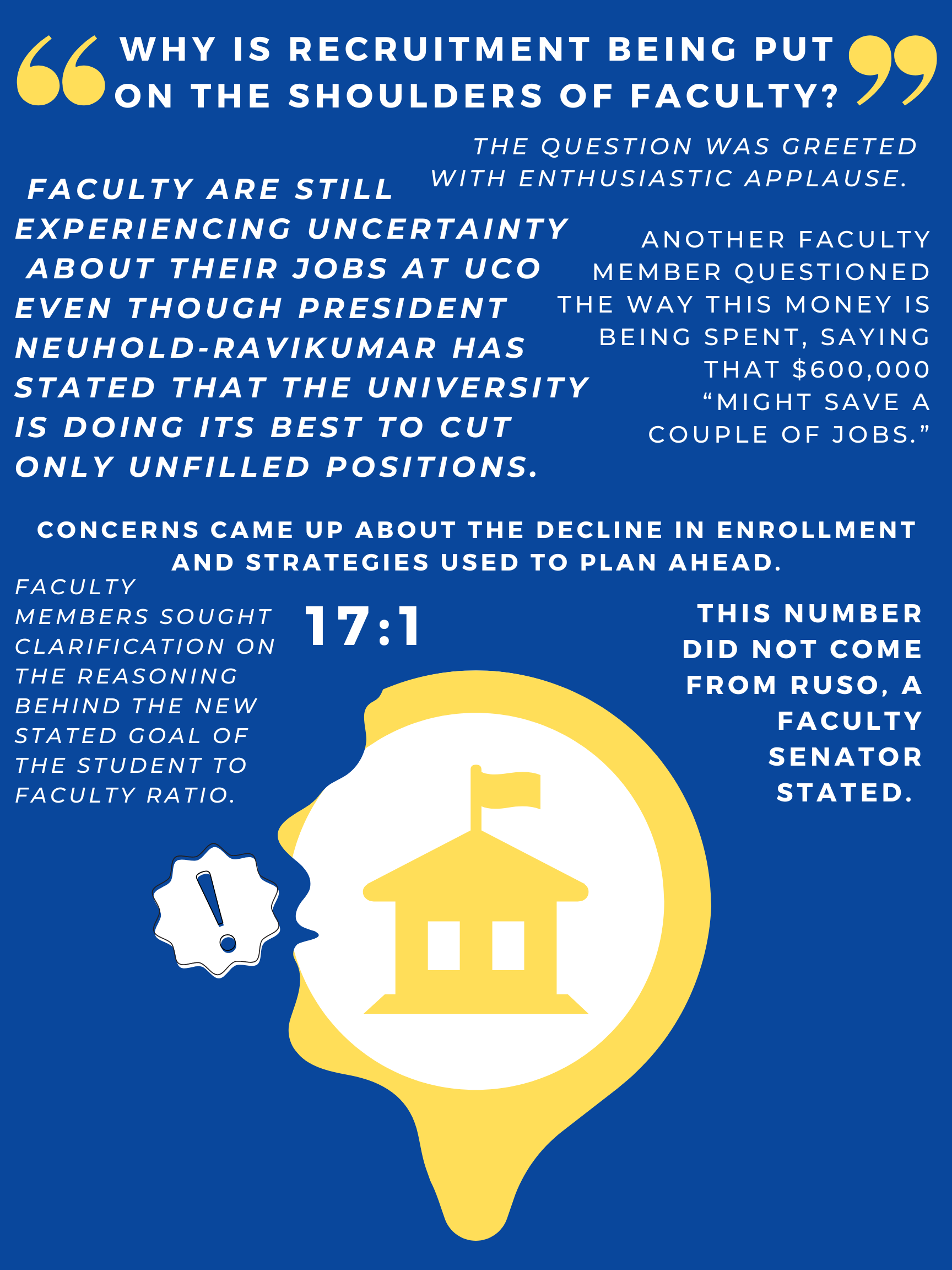 In a Faculty Town Hall held Oct. 5 in the College of Liberal Arts Lecture Hall, faculty members were invited to ask questions about proposed faculty reductions and recent enrollment shortfalls. Before the meeting ended, the proposal of a no-confidence vote for President Patti Neuhold-Ravikumar received a round of applause.

Many questions centered on faculty responsibility for solving budget imbalances and other campus issues.

“Why is recruitment being put on the shoulders of faculty?” one town hall member asked.

The question was greeted with enthusiastic applause.

Enrollment is dipping this semester, said Alyssa Provencio, moderator of the town hall. This lowers income for the school.

Recruitment is one initiative to bring enrollment back up.

Freshman enrollment is down approximately 6.3 percent as compared to last year, Provencio said.

Meanwhile, the current number of total students is 12,311, down 7.7 percent from last year, she said.

Of all current students, 9,389 are attending at a rate equivalent to full time. This means 12 credit hours or more in a typical semester. This number is down a similar 7 percent from last year.

So not only are there fewer students, they are also taking fewer credit hours this semester. This brings revenue down for UCO as well.

Credit hours produced this semester have seen a decline of approximately 8 percent since last year, meaning fewer classes are being produced overall.

With these updated statistics in mind, town hall held a discussion of strategies to plan ahead. In other words, the plans for the plans.

According to the faculty senators, limited groundwork for a strategic plan to increase enrollment exists from years past. Though some framework exists, there is no comprehensive plan at this time.

In particular, there was a benefit group tasked with creating an institutional plan. They met for two years and worked with a hired consultant to no avail.

Work began on the inclusive community strategic plan about 18 months ago. The working plan included broad representation across the university and was intended to develop a framework for the path ahead.

While this inclusive plan was being developed, President Patti Neuhold-Ravikumar hired another group to create another method. Now leads from both plans are being worked on, Provencio said.

Members of the faculty senate are part time senators, also working their other jobs at UCO.

This was rejected by the President on the grounds that a yearly reappointment would be disruptive.

Applause surfaced after support for a no confidence vote on Neuhold-Ravikumar was voiced at the town hall.

The discussion also reviewed background information that may point toward the faculty’s emotional climate.

“Last year, the Kansas Board of Regents voted to implement a policy that would allow state universities to fire tenured faculty in responding to financial constraints caused by the COVID-19 pandemic,” Provencio said.

Decisions like this have the possibility of influencing RUSO, which could affect UCO. For context, RUSO is the Regional University System of Oklahoma, an accreditation board which holds power over some UCO policy.

Adding to the emotional climate as well, Florida State University fired 70 percent of its faculty after the regents’ decision became public.

Faculty are still experiencing uncertainty about their jobs at UCO, although Neuhold-Ravikumar has stated that the university is doing its best to cut only unfilled positions.

After the original decision, “provisions were added to the region’s policy of Kansas reasons, including that faculty should be allowed to weigh in on plans prior to their implementation and that a university should demonstrate an effort to exhaust all other options,” Provencio said.

The reason faculty lines are being eliminated at UCO is to save money for the university, an attempt to mitigate the imbalance in spending and revenue.

There are additional factors affecting the development of a way out of the budget crisis. About 26 percent of the University’s funding comes from the state. This means that UCO receives the least funding proportional to population compared to other schools in the state.

While being Oklahoma’s third-largest college, UCO is the second least funded by the state, according to UCO’s state funding page. As of Fall 2021, faculty and staff were compensated more than 80 percent below market rate.

Another factor in the equation is marketing, which can be an important part of strategic plans to increase enrollment, one strategy to balance the budget. However, contracting with marketing firms also costs the university.

Current spending figures for rebranding put the cost around $600,000. UCO is spending about $200,000 with one marketing consulting firm.

A faculty member questioned the way this money is being spent, suggesting some “in-house work” for the university.

It is typical for colleges to go through a rebranding process every three to six years.

Faculty members also sought clarification on the reasoning behind the goal to bring the student to faculty ratio to 17:1.

The current ratio is currently higher in some departments and lower in others.

The 17:1 ratio would be put in place with a goal of balancing income from enrollment and spending on professors. It is also one factor in the decision to cut faculty lines at UCO.

To complicate the matter further, Academic Affairs and Finance and Operations both use different numbers when accounting.

Finance and Operations uses a 15:1 ratio while Academic Affairs uses 15.9:1, much closer to 16. With different and lower numbers, their equations look different than those calculated using the 17:1 ratio.

Even after assurances from the university, Faculty are distressed at the possibility of losing their jobs while UCO works to balance the budget.

This semester, statistics for sources of university income are all down around 7 percent from last year. UCO looks closer at what to reduce and where to spend in hopes of bringing in more students and therefore more money.

Balancing the budget continues to pull tensions across UCO as employees work towards the creation of functional strategic plans.