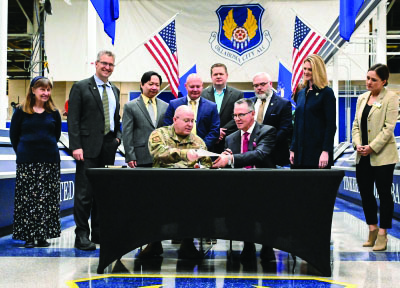 STEM faculty and students eagerly anticipate the arrival of a Haise Supercomputer cluster from Tinker Air Force Base, which the College of Mathematics and Science will receive through an educational partnership agreement.

The IBM based supercomputer cluster is in “the final stage of arranging for it to be moved”, according to system administrator Lily Kelting. Its applications will range from computational science and parallel computing, to artificial intelligence systems for the disabled, data science, gene sequencing, and geographic information systems applied to biological field research.

The educational partnership agreement was made possible by Tinker Air Force Base’s connection to the department of Engineering and Physics advisory board and was announced through a university press release on April 22.

“UCO is pretty well connected to Tinker,” said Evan Lemley, Ph.D., assistant dean of the UCO College of Mathematics and Science and professor for the Department of Engineering and Physics. “In particular what’s called the engineering advisory board. And so we’ve got representatives from Tinker on that advisory board.”

The representatives from Tinker knew of the College of Mathematics and Science efforts in high performance computing, according to Lemley.

“And so they were ready to get rid of some equipment, and they knew we might be interested,” Lemley said. “So that’s how it happened.”

The new supercomputer cluster will be attached to the university’s existing cluster, Buddy, located in the Donald Betz STEM Research and Learning Center. The National Science Foundation awarded Buddy to UCO in 2014 and it has since been applied to research into particle transport, micromixing, stochastic modeling, ecological modeling, bioinformatics and spread of disease.

Buddy contains 37 computing nodes. Nodes are individual computers working alongside one another in a process known as parallel computing. The new cluster will contain significantly more nodes than Buddy, according to system administrator Lily Kelting.

“One of the big things that we’re planning for is that it allows additional GPU partitions,” she said.

A Graphics Processing Unit (GPU) is a type of processor designed to render images.

“Processors inside your computer, they’re designed to kind of take things one at a time and go through maybe one or four cores,” Kelting explained. “And the new supercomputer cluster that has more GPUs that we’ll be adding to it, those have 1000s of tiny little cores.”

Gang Qian, Ph.D., a professor in the Department of Computer Science, said in an email he plans to use the new cluster to study how to improve database query performance through distributed indexes.

“It means a lot to the professors. More and more disciplines need computers to handle large amounts of data generated through research,” Qian said in the email. “In addition, the professors will be able to involve their students in their studies, preparing the next generation of scientists who are equipped with essential computing and quantitative analysis skills.”

Lemley expressed a similar attitude toward the potential of the new machine in educational activities as well as student and faculty research.