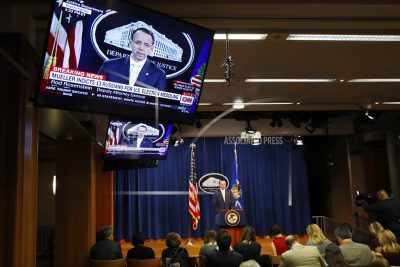 WASHINGTON (AP) — The Latest on the Russia probe (all times local):
3:25 p.m.
An attorney for a prominent law firm is pleading guilty to lying to federal authorities about his interactions with a former Trump campaign associate.
Alex van der Zwaan is entering the plea in federal court in Washington where he is admitting to lying to special counsel Robert Mueller’s investigators about his interactions with Rick Gates. Gates is a former aide on President Donald Trump’s campaign and a longtime associate of former Trump campaign chairman Paul Manafort.
The charge against van der Zwaan does not involve election meddling or the Trump campaign’s operations. It stems from the special counsel’s investigation into a covert Washington lobbying campaign Manafort and Gates are accused of directing on behalf of pro-Russian Ukrainian interests.
Manafort and Gates have pleaded not guilty.
___
10 a.m.
The law firm where a lawyer charged by special counsel Robert Mueller used to work says it fired him last year and has been cooperating with authorities.
Skadden, Arps, Slate, Meagher & Flom LLP issued a statement Tuesday after news broke that Alex van der Zwaan had been charged with lying to investigators.
A charging document filed in federal court in Washington accuses van der Zwaan of lying to investigators about his interactions with Rick Gates, a former Trump campaign official.
Gates was indicted last year along with Paul Manafort, President Donald Trump’s campaign chairman, on charges of conspiracy to launder money and acting as an unregistered foreign agent.
___
9:35 a.m.
Special counsel Robert Mueller’s prosecutors have filed a new charge against a lawyer they say lied to federal investigators in the Russia probe.
A charging document filed in federal court in Washington on Tuesday accuses Alex van der Zwaan of one charge of making false statements. The information was filed ahead of a plea hearing scheduled for later Tuesday.
The court filing says that van der Zwaan lied to investigators about his interactions with Rick Gates. Gates, a former Trump campaign aide, was indicted last year on charges of conspiracy to launder money and acting as an unregistered foreign agent.
Mueller is investigating Russian election interference and links between the Trump campaign and Russia.
___
8:36 a.m.
President Donald Trump is again accusing his predecessor of not doing enough to prevent Russian meddling in the 2016 presidential election.
Trump tweets that’s because President Barack Obama “thought Crooked Hillary was going to win and he didn’t want to ‘rock the boat.'” But Trump says when he won “the whole game changed and the Russian excuse became the narrative of the Dems.”
Trump’s tweet Tuesday included a quote from Obama saying in October 2016 that “there is no serious person out there who would suggest somehow that you could even rig America’s elections.” Obama was addressing Trump’s claims of voter fraud, not Russia’s attempt to influence voters on social media.
Obama has defended his response to Russian meddling, saying he had told the Russian president to “cut it out.”
Share This