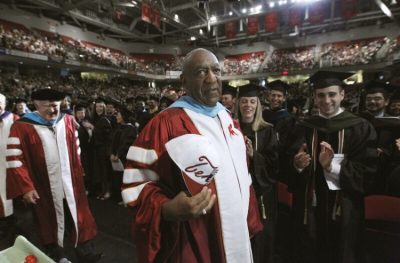 Bill Cosby’s alma mater says it has revoked an honorary degree given to the comedian more than two decades ago.
Temple University in Philadelphia says the school’s board of trustees accepted a recommendation Friday to rescind the 1991 degree it awarded to Cosby.
A statement released by the school cites Thursday’s jury verdict finding Cosby guilty of drugging and molesting a Temple employee in 2004.
The school was among few that waited to pull honors from Cosby until after the verdict.
Cosby received a bachelor’s degree from Temple and long served as a public face and fundraiser for the school.
Board of Trustees Chairman Patrick O’Connor previously said he would recuse himself from discussions on the honorary degree. O’Connor represented Cosby in 2005 when he first faced allegations of sexual assault.