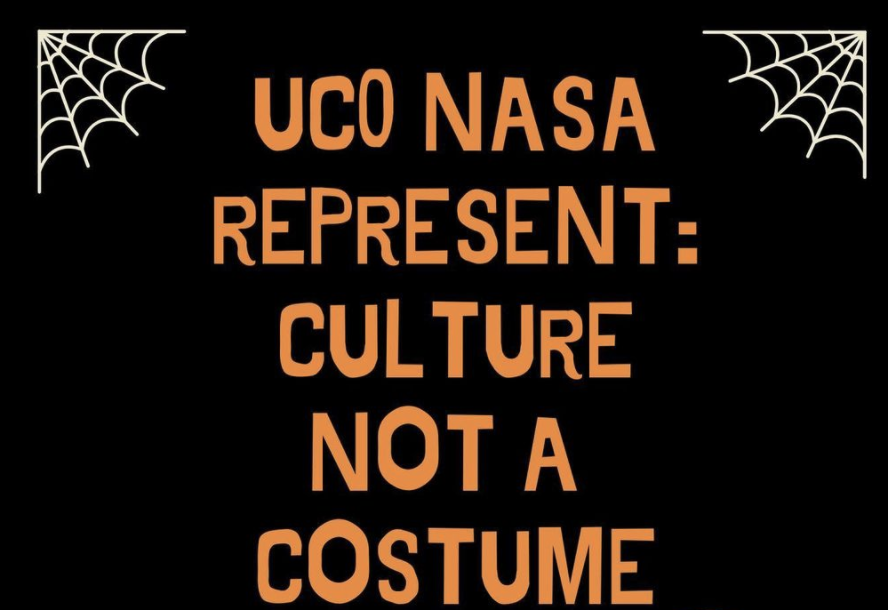 With Halloween less than a week away, the University of Central Oklahoma Native American Student Association hosted the “culture, not a costume” event via Zoom to start conversations on campus about certain controversial Halloween costumes and its impact on minority cultures.(Provided/NASA Instagram)

Student organization hosts “Culture, Not a Costume” event ahead of Halloween

With Halloween less than a week away,  the student-led organization hosted the “culture, not a costume” event via Zoom to start conversations on campus about certain controversial Halloween costumes and its impact on minority cultures.

Cultural appropriation can occur in a variety of forms, however, around Halloween, it often involves wearing culturally insensitive costumes.

“It’s really important to let everyone on campus know what’s appropriate and what’s not because it’s something the campus, itself, has highlighted as important is minority issues,” said Johnathon Simpkins, treasurer of UCO’s Native American Student Association. “That’s one of the issues that we have is cultural appropriation.”

Cultural appropriation, a term that was officially added to the Oxford English Dictionary in 2017, is defined as “the unacknowledged or inappropriate adoption of the practices, customs, or aesthetics of one social or ethnic group by members of another community.”

The misuse of another culture’s regalia as a costume contributes to racial stereotypes in misrepresented and marginalized groups, said the president of the organization, Jo Tiger.

Many commonly worn Halloween costumes, such as the feathered headdress, are sacred to a number of Indigenous tribes. Traditionally, the war bonnets symbolized power and were only worn by chiefs and warriors.

“There’s more history behind a traditional dress than what the Halloween store portrays,” said Tiger.

A recent Pew Research Center survey found that 58 percent of Americans say it is acceptable to wear another culture’s traditional dress as a Halloween costume.

“I don’t think people do it maliciously,” said Simpkins. “I just think they’re not taught so I think it’s important to let them know that what they’re doing is offensive.”

“I think that’s where the big difference comes in between the two and the line is, like, what’s your intent and how competent are you about what you’re dressing up as?” said Simpkins.

In recent years, many colleges across the country have made efforts to raise awareness of cultural appropriation through similar events and campaigns.

UCO’s Health Promotion posted on Instagram a list of questions students can ask themselves before purchasing a costume that could potentially offend another person’s culture.