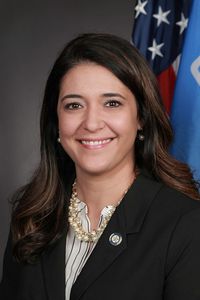 According to the unofficial results from the Oklahoma State Election Board, Bice defeated Horn by nearly 4 points, 52.1 percent to 48.9 percent, in the district.

“It’s a little bit of a surreal moment, I cannot tell you how excited I am to be standing before you as the next congresswomen for the 5th district,” said Bice in her victory speech.

Bice currently represents District 22, including parts of northern Oklahoma County, in the Oklahoma State Senate. She serves as chair of the Senate Finance Committee and most Oklahomans know her by her work in modernizing liquor laws in the state. During her campaign, Bice emphasized supporting gun rights, opposing the Affordable Care Act, and improving the state’s infrastructure and education system.

The 5th Congressional District is in the central part of the state and includes most of Oklahoma County and all of Seminole and Pottawatomie counties. Some major cities in the district include Oklahoma City, Edmond, Shawnee, and Del City.

According to the state election board, registered Republicans outnumber Democrats in all three counties that make up District 5.

The district had been traditionally Republican-led since 1975, however, that changed when Horn beat Republican incumbent Rep. Steve Russell in 2018, marking it the first time a Democrat won the seat in 44 years.

Horn was the only Democrat in the state’s congressional delegation. She was considered one of the most vulnerable Democrats in the House as she represented a district that President Donald Trump won by 14 points in the 2016 general election.

In her reelection campaign, Horn had emphasized expanding the Affordable Care Act, improving the education system, and working across party lines to create bipartisanship solutions. Her current term will end on Jan. 3, 2021.

The results of this race mean that all five seats that represent the five districts of Oklahoma will be Republican-held. The representatives of the other congressional districts in the state have secured their seats in this election and will serve another term.

All 435 seats in the House were up for re-election Tuesday night. At the time of the election, Democrats hold a 232 to 197 majority over Republicans. The Libertarian Party holds one seat and there are currently 5 vacant seats in the House.

Election results are still subject to changes and are not considered final until they’re certified by the appropriate election board. State and federal election results will be certified no earlier than Tuesday, Nov. 10, according to the State Election Board.