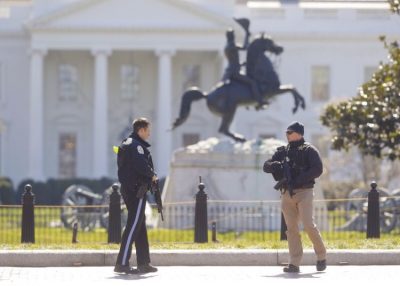 WASHINGTON (AP) — The Secret Service says a man shot himself outside the White House, and medical personnel are on the scene.
President Donald Trump is not at the White House — he’s in Florida, but is set to return later Saturday.
The agency says in a Twitter post that there are no other reported injuries related to the incident.
The Secret Service tweeted about noon Saturday that personnel are responding and a person “allegedly suffered a self-inflicted gun shot wound along the north fence line” of the White House.
The District of Columbia police says its homicide/natural death unit is responding.
White House press secretary says “we are aware of the situation, the president has been briefed.”