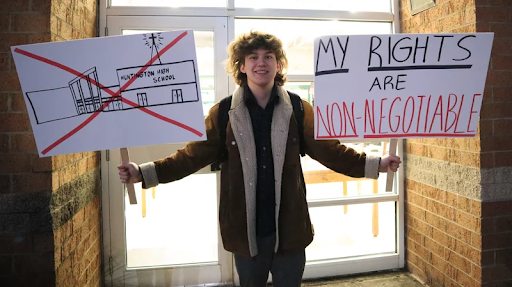 A group of students and parents are suing a West Virginia school district for allowing an evangelical preacher to hold a religious revival assembly during the school day in early February that some students were required to attend.

This suit comes after a walkout of the revival at Huntington High School where over 100 students walked out their classrooms chanting “separate the church and state” and “my faith, my choice.”

“For years, school system employees have violated the constitutional rights of students by promoting and advancing the Christian religion, as well as by coercing students into participating in Christian religious activity,” the suit reads.

According to the lawsuit filed on Feb. 2, two Huntington High School teachers escorted their classes to an assembly hosted by evangelical preacher Nik Walker, who had led other revivals in recent weeks.

During the rally, students, including a Jewish student who asked to leave but was prohibited from doing so, were told to close their eyes and raise their arms in prayer. Students were told that those who did not follow the Bible would go to “face eternal torment.”

Some students questioned the legality of the assembly. One student, Cameron Mays,  sent a text message to his father, asking him, “Is this legal?”

UCO political science professor Keith Eakins does not think so.

“In my opinion, that would be an unconstitutional violation of the Establishment Clause according to current Supreme Court precedent,” Eakins said.

He thinks that the event itself was not the reason the school is being sued. He said it is because students were coerced into the assembly.

Cabell County Schools Superintendent Ryan Saxe believes some students’ rights have been violated, he said “forcing religious expression on those with differing beliefs is not acceptable and is not in alignment with district, state, or federal policy and will not be tolerated by my administration or the Board of Education.”

This is not the first complaint the school district has received. In 2017, the Freedom From Religion Foundation notified Cabell County Schools about two separate religious assemblies that were held during the school day at Huntington High School.

In 2019, the foundation wrote to the school district saying it was concerned that adults created and were running religious clubs in Cabell County Schools.