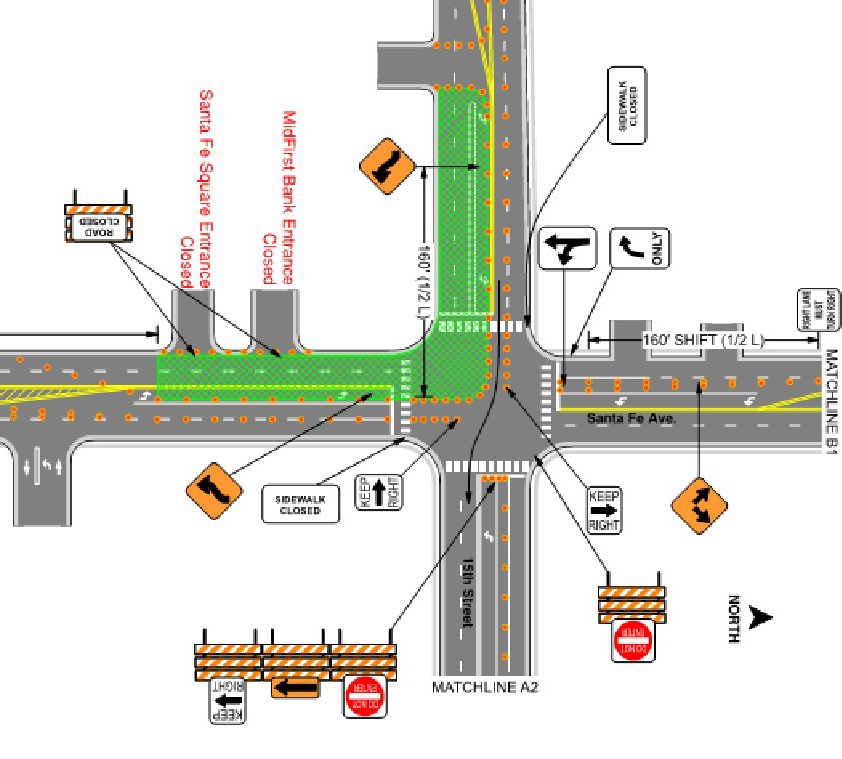 The Edmond City Council initiated phase one of an $800,000 construction project last week at 15th Street and Santa Fe Avenue to resurface the road’s concrete.

According to a letter from A-Tech Paving, the project’s contractor, construction will also include improvements on the intersection’s sidewalk ramps.

The project is predicted to last seven weeks, until Aug. 12.

A-Tech is reducing all streets into one-way lanes, and driveways by the intersection will be closed on certain occasions. The company also reprogrammed the intersection’s traffic signals to prevent possible accidents by letting one street pass at a time. The city council does recommend those who regularly drive through the area to take alternate routes.

The project began during the summer to avoid heavy traffic congestion during the school season, as Santa Fe High School is nearby.

“We’ve gotten complaints about that particular intersection for years,” said Casey Moore, City of Edmond publication information officer. “There’s only so many projects that you can get to in a year, and so this was the year that we were going to get that scheduled. It’s been needing work for quite some time.”

A-Tech’s letter was sent to all businesses surrounding the area, which included their contact information for owners and managers to call with any complaints. The council also announced the project to the public via Twitter and on their website.

“We want people to work with the contractor on that if possible,” Moore said.

Some businesses have been capable of finding new routes while workers are digging up old concrete. Staff at Champion Driving Academy, a business by the intersection, have been able to find alternate ways to pass, which prevent their students from driving through construction.

“Luckily we can turn right out of our business, and up to 300 yards it opens up into a four-way lane, and that is our method of travel right now,” said driving instructor Mike Tucker.

However, construction has also affected time and safety of other establishments, especially for their customers.

Crest’s operation manager, Clay Duckett, said that cars have been cutting through their parking lot to avoid traffic. He also said that drivers have attempted to pass their back lot where trucks deposit the store’s items.

“The biggest complaint that we’ve heard is that a lot of shoppers feel unsafe walking out there because a lot of people keep cutting through our parking lot, speeding too fast,” Duckett said. “I heard that one employee had his car side-swiped, and that person that hit the car ran. So he didn’t stay or stick around to exchange insurance.”

Santa Fe Avenue and 15th Street will also be part of the council’s intelligent transportation system project for Phase 3, upgrading the intersection’s traffic signals with new field devices and technology infrastructure that will help the Edmond Traffic Management Center oversee any traffic or car accidents.

For any concerns on the construction project, please contact Edmond’s engineering inspection functions specialist, Ken Miner at 405-359-4773, or by email at ken.miner@edmondok.com.