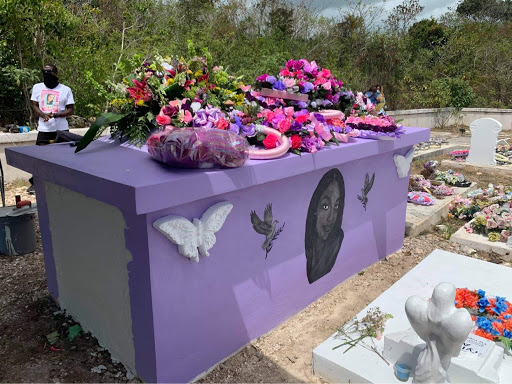 A funeral is held for Candice McDonald in Eleuthera, the Bahamas April 3. Purple was McDonald’s favorite color. McDonald died in a boating accident in the Bahamas March 14. (Provided/Melina Gallegos)

The life of the party. A joy. Beautiful soul. Bubbly. The center of attention.

These were some of the words friends and family used to describe Candice Michelle McDonald.

McDonald was born in New Providence, the Bahamas, on Nov. 30, 2000. Her parents, Mekal McDonald and Latoya Saunders, were “extremely excited they now had a princess,” according to a memorial booklet obtained by The Vista.

McDonald died in a boating accident that killed three people and injured two others in the Bahamas on March 14, according to Bahamas Press and Eyewitness News.

McDonald grew up and spent most of her life in Eleuthera, an island in the Bahamas. She would then travel to the University of Central Oklahoma in August 2018 to study for two semesters as an international student. It was here that she would meet her best friend, Melina Gallegos.

It was Gallegos’ first day at UCO. She had just moved into West Hall when she saw McDonald and asked if they could hang out. From that point on, McDonald became Gallegos’ first ever college friend, and the pair became “insanely close.”

“Opposites attract,” Gallegos said of their relationship. “I was more mellow, and she was more bubbly.

“She’s the reason why I have so many friends at UCO. She got me out of my shell, and I was the one she could just chill with.”

The two of them moved into Murdaugh Hall the semester after. Gallegos said she didn’t have any sisters and that McDonald would be “the closest thing she had ever had,” especially with the way the two bickered and borrowed each other’s clothes.

Gallegos said one of her favorite memories she shared with McDonald was when they both went ice skating, which was an unfamiliar activity for McDonald as she grew up in a tropical country.

“We probably fell down like thirty times that one night,” Gallegos said. “At one point, she had picked up some snow and threw it in my face.

During her time at UCO, Gallegos said McDonald was involved in several campus clubs and societies, including the Black Student Association and S.I.S.T.A.S (Sisters Inspiring Sisters Through Academic Success), which was a mentorship program focused for African American women. McDonald’s campus involvement would just leave so many more people impacted by her joyful spirit.

“She just lit up the room everywhere she went,” Gallegos said. “Everyone felt included around her.

“You could be a stranger walking by her, and she would just say hi.”

The pair would continue to keep in touch regularly through Snapchat even after McDonald left UCO in May 2019 to return home to the Bahamas.

UCO junior Austin Markham met McDonald through Gallegos. He described his relationship with McDonald as “fast-paced,” going from newly meeting her on a weekday to hanging out with her by the weekend.

“I saw her eating in the cafeteria and had to figure out who this pretty girl was,” Markham said of his first time seeing her. “She kind of gave me this look, but she would deny it if she were reading this.”

During the period of their friendship, Markham said he had connected with McDonald on a deeper level. He said she “saw him and supported him” and recalled a time when she and Gallegos had surprised him at his first concert as a vocal performance minor, which is a memory he will cherish forever.

“Candice always had a way of knowing how others were feeling, and she knew what she could do to make you feel better, which is not something many can do,” Markham said, adding that McDonald was “the core of her friends.”

McDonald’s faith was also a big part of her upbringing and life, according to her memorial booklet. While studying at UCO, she attended a weekly Bible study group for international students nearby campus.

“My husband, Bill, and I were having a weekly meal and Bible study at our house, and Candice came with some friends,” said Kathryn Spurgeon, who hosted the study group with the Henderson Hills Baptist Church for over twenty years. “She continued to come, and we got to know her.”

Spurgeon said she was shocked after hearing about McDonald’s passing from Gallegos.

“She was a joy and always had a smile,” Spurgeon said. “I feel like we lost a person with a lot of potential.

“I never thought I would be getting a message like that,” Gallegos said as she recalled plans for her to visit McDonald in her home country one day. “I had to read it for a solid minute before it kicked in.

“I never thought I would lose a lifelong friend.”

Gallegos and several friends at UCO held a candlelight vigil to honor her that same evening at Old North. They laid out photos of McDonald, lit candles, played songs that she would listen to and released purple balloons, which were in her favorite color.

Markham was out of state when he received news of McDonald’s death from Gallegos and was unable to attend the in-person vigil.

“She texted me, and I remember just placing my phone down on my bed in disbelief,” Markham said. “It was an emotional few days but seeing how her friends honored her at the vigil was very uplifting.”

A funeral was held for McDonald in Eleuthera, the Bahamas, Saturday. Her purple and pink-themed memorial booklet, titled “Our Princess,” notes her as “a young, beautiful soul, in her prime, a happy young lady, who always displayed a smile with a pleasant attitude and a humble spirit. The Lord saw fit to loan her to us for just a short while.”

“The lesson I have learned is that we must take advantage of the time we are given,” Markham said. “We never know when we may not wake up here on this earth.

“I know Candice is in a better place making someone feel special today.”

McDonald leaves behind not only her friends and family in the Bahamas and Oklahoma but also her legacy to be remembered as a loving daughter, a supportive friend and a joyful person. As her memorial booklet states: “a princess has left her glass slippers.”