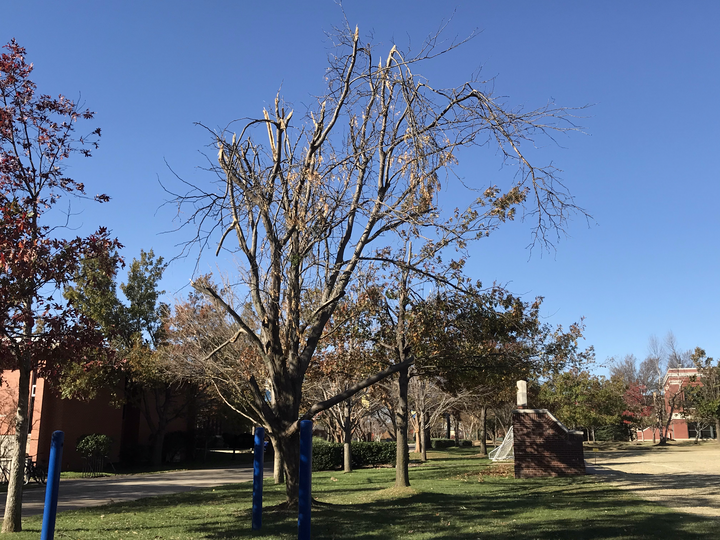 Partially hanging branches dangled over walkways and other areas on the University of Central Oklahoma campus as cleanup from the ice storm continued into the final weeks of November. (The Vista/Gretchen Houk)

Recovering after a destructive ice storm

Partially hanging branches dangled over walkways and other areas on the University of Central Oklahoma campus as cleanup from the ice storm continued into the final weeks of November.

Three sets of contractors were hired to join the UCO facilities management team as they assessed the damages sustained from the ice and wind, and two weeks after the storm they are almost done clearing leftover leaves and small branches.

Phase one began on Oct. 27, when the workers started cutting hanging branches and clearing debris off the ground. Their first priority was clearing walkways and fire lanes to ensure campus would be safe if classes had resumed on Wednesday, Feist said.

Phase two began over the weekend, and workers were spotted cutting branches between the Nigh entrance and Broncho Lake. They will finish trimming the higher branches once campus closes for Thanksgiving.

Due to power outages across Edmond and the Oklahoma City area, the university canceled classes through the end of the week, as virtual learning students did not have access to the internet.

Workers from Signature, a company that the university generally contracts to mow, are finishing up phase one by clearing leftover leaves. Mowers were seen around campus collecting fallen leaves and bagging them to be disposed.

“That’s when we’ll go into the trees and clean them up,” Feist said.

Branches that had broken higher in the trees but were not seen as a safety hazard were not immediately cut. The facilities management team attended to the low hanging branches first since they posed a threat to students’ safety.

Feist estimated that about 85 percent of trees on campus were damaged, with the deciduous trees sustaining the most damage due to the weight of the ice laden, leafy branches.

Although, some of the evergreen trees are entirely brown and are unlikely to recover.

The trees in between Evans Hall and the Administration building were badly damaged according to Feist.

Feist said that as they moved around campus working on specific areas they were able to assess the condition of the trees, but will not know the full extent of the damages until the spring when the trees bud.

“If we find out they can’t survive, we’ll cut them down, and we’ll be working on the replacement process over the winter,” Feist said.

He was hopeful that some of the more heavily damaged trees would recover. “We’ve got a pretty good idea which ones aren’t going to make it, but sometimes things surprise you.”

University facilities management employees have been depositing broken branches and debris in Parking Lot 2 over by Northern Hills Elementary, but some of the contractors take debris to the city dump.

The university has not received any help from the city of Edmond at this time because its efforts are being concentrated on the debris in residential and commercial areas. Edmond residents can set debris on their curbs, and Edmond facilities workers will come around to collect the limbs and remove it to the city dumps.

The city has said that they will begin clearing branches and debris from the east side of town first and will move west.