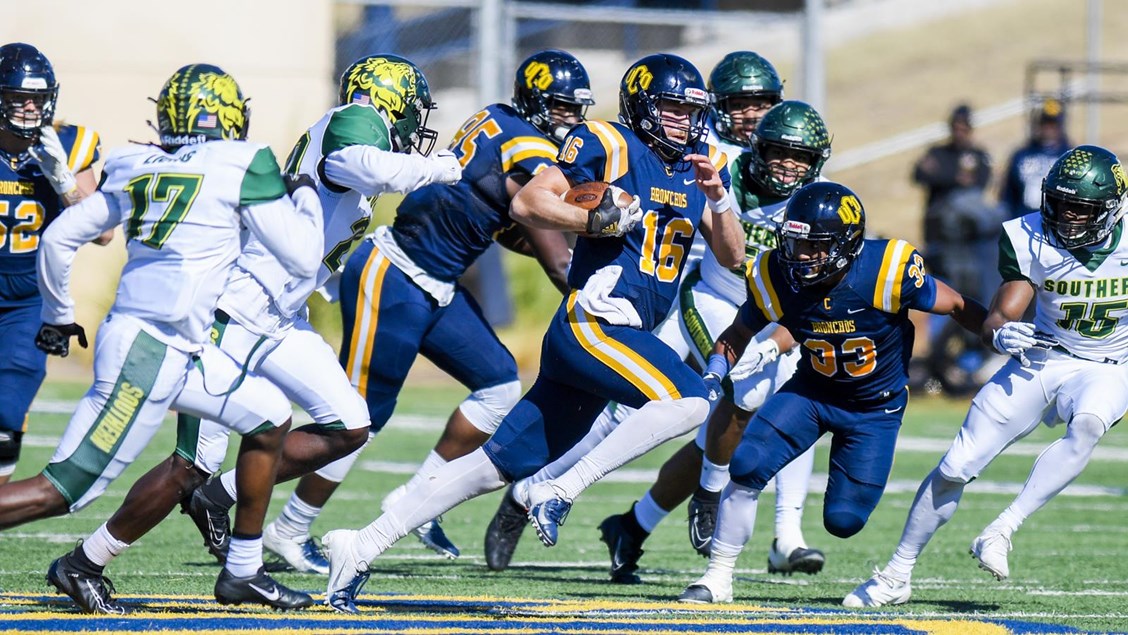 After the University of Central Oklahoma’s 52-27 win over Missouri Western University, UCO quarterback Chandler Garrett stood on the field at Wantland Stadium with a smile on his face. He had just set the record for most yards of total offense in a game at UCO.

“I didn’t know until I came out here, but they told me,” Garrett said. “It’s a good accomplishment, but I’m just happy we got the win.

Garrett set the record with 487 yards, 272 of which were rushing, which tied him for second most by any player in school history. He tied with Joshua Birmingham, who ran for 272 yards against Lincoln University in 2012 and trailed Joe Aska, who ran for 312 in 1994.

“He’s just a gritty kid,” said head coach Nick Bobeck about Garrett. “He finds a way to move the football team. It’s not always pretty, it’s not how you draw it up most times, but he finds a way to do it. He’s a tough, gritty kid and our guys follow him.”

On Saturday in the Mid-America Intercollegiate Athletics Association matchup, it was Garrett who was following his guys, the offensive linemen.

“They are some of the best dudes I know,” Garrett said. “I’m proud to play and share the field with them. We had Jacob Blair go down and it’s just next man up mentality and [Alex] Eichler goes to center and Ben Raulston, Nick [George] and [Tyler] Stillwell, they just do their job well. Whatever coach asks them to do they do it to their full abilities. So I can’t ask for a better group up front.”

The Bronchos lost Blair in the first half due to an injury, which left the offensive line with just five guys who have played this season.

“I was really proud of those guys, that was a gritty performance on their part too,” Bobeck said. “They’re playing every snap including [point after] field goals and getting guys running into them. Hopefully we get a couple guys back next week and get a little more of a rotation.”

With Garrett’s record setting performance, the Bronchos were able to make a come-from-behind win as they had four fumbles on the day.

“It’s just kind of crazy because we left so much out there, we could’ve had a lot better day,” Garrett said.

The Bronchos had four total turnovers as three of the fumbles were recovered by the Lions and UCO gave up an interception.

“I was proud of our kids for fighting,” Bobeck said. “We didn’t play very well early on and turned the football over and put ourselves in some tough spots.”

On the fourth play of the game, the Bronchos fumbled the ball and Missouri Western’s Malachi Broadnax picked it up and returned it 78 yards for a touchdown.

Two drives later, UCO fumbled again and Missouri Southern went on to score as MSU quarterback Jacob Park threw a 43-yard touchdown pass to Charles West. However it would be the Lions last touchdown of the half as UCO’s Daniel Baughman intercepted his first pass of the season with just 17 seconds left in the first half.

“[We] put the defensive side of the ball in some really tough spots and those guys came through and did a really good job keeping those guys out of the end zone,” Bobeck said. “And that football team has scored points on everybody so I was really happy with our defensive football team.”

Missouri Southern averages 34.4 points per game. The Lions are led by their quarterback, Park, who played Division I football at Iowa State University. He started four games with the Cyclones before taking a medical leave of absence from the team.

“That quarterback is probably as talented of a quarterback that has played in this league since I’ve been in it honestly,” Bobeck said. “We’ve followed him every game, I’ve seen every game and every rep that kids taken this season and they’ve got a good group of receivers.

The Lions put up 292 yards passing and three touchdowns but were not able to run the ball as they were held to just 25 rushing yards.

“I just want to see clean football,” Bobeck said. “I sound like a broken record here but I truly believe that are kids are really talented. If you play clean football, you win football games by a lot.”