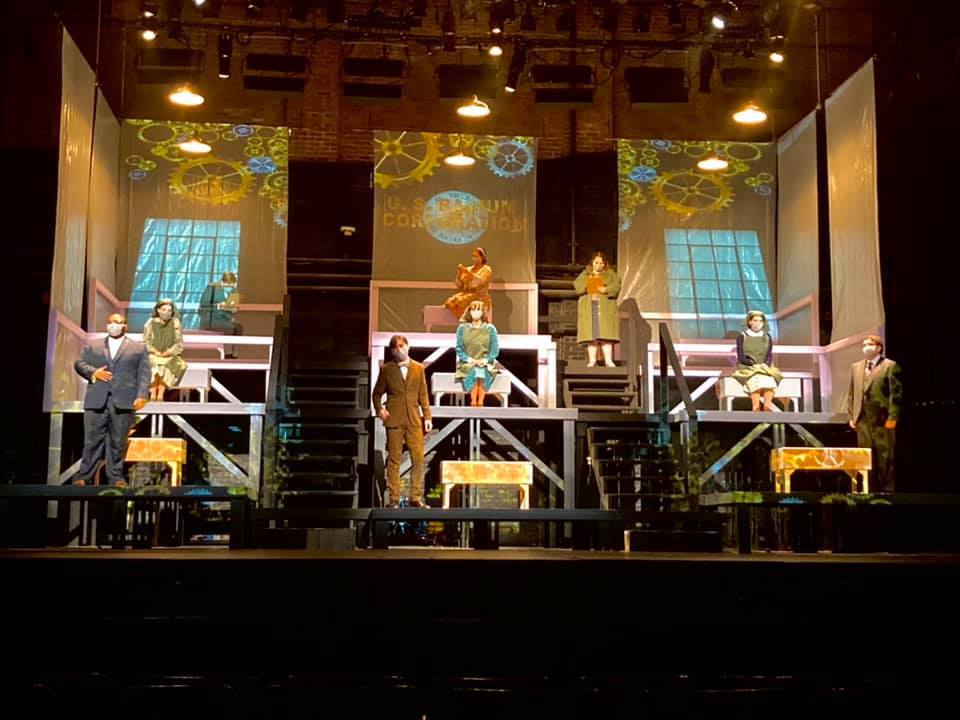 "Radium Girls" in Mitchell Hall at the University of Central Oklahoma performed for a virtual audience during the COVID-19 pandemic. Inspired by a true story, “Radium Girls” traces the efforts of Grace Fryer, a dial painter, as she battles not only the U.S. Radium Corporation, but with her own family and friends, who fear that her campaign for justice will backfire. (Provided/UCO Department of Theatre Arts Facebook)

The cast of “Radium Girls” gave a glowing performance, taking inspiration from the strong women they portrayed to work through social distancing requirements and invent new ways to perform in a pandemic.

The UCO Department of Theatre Arts at the University of Central Oklahoma live-streamed the opening night production of “Radium Girls” on Thursday with a limited cast of nine actors and a stage setup that would transfer to a Zoom platform if necessary.

D.W. Gregory wrote “Radium Girls” about the female workers in the 1920s who painted luminous watches with radium, a dangerous element that at the time was believed to be a cure for cancer and blindness.

Associate teacher and director of UCO’s performance of “Radium Girls,” Alicia Tafoya, said she chose the script with the strong female characters in mind.

“The great thing about this particular play is that it’s written by a woman. It’s about female voices, and we have a lot of women in our drama department,” she said. “I was looking for an opportunity to showcase their talent.”

The women who worked with radium began to fall ill from an unknown and mysterious disease caused by exposure to the element, and some began to push for change.

The play was originally a 30-member cast, but because of the national pandemic and CDC recommendations to socially distance, Tafoya limited it to a nine-person cast.

“Radium Girls” has the ability to be performed by four men and five women, who all play multiple characters, using costume changes and voice inflection to indicate character shifts.

“We have nine actors, but we also have three swings,” Tafoya said. “They are like an understudy but an understudy typically will do one role.”

Swings are responsible for learning multiple parts. One of the female swings has learned every part that the five women play, and each woman plays multiple roles. Tafoya said the swings were instrumental during rehearsal because if one actor needed to be gone for health reasons or work, a swing could step in and rehearsal could continue.

“The students have been so innovative, so positive, and have taken a really difficult situation and made something beautiful out of it.”

All the actors remained on stage throughout almost the entirety of the play, and visual cues such as colored lighting and projections onto the stage’s back wall signaled scene changes.

“There isn’t a standard for socially distanced theatre,” Tafoya said.

All actors wore masks and spaced themselves 6 feet apart or more to comply with UCO guidelines.

“You see the set is blocked out in nine blacks as if it were a Zoom setup so that the work we did, if we had to pivot online, would still apply in a Zoom space. As it became apparent that we wouldn’t, we were able to push the boundaries and move the actors safely around the set.”

Production began in early September and Tafoya, along with the cast, worked together to create innovative ways to block — a theater term in reference to actor placement — with safety in mind.

“Of course we know more now than we did when this all started, but there’s a very real possibility that if you make a bad choice an actor could get sick and possibly even die,” Tafoya said about the process of directing in a pandemic.

She added, “That’s a level of stress and a level of difficulty that is not typical to theater.”

While on the UCO campus, Snapchat users can use the “Radium Girls” filter, which will add luminescent blue lines over their faces, mimicking the play’s poster.

The poster features Grace Fryer, who becomes ill while working in the watch factory, with glowing blue lines over her face. This is a nod to how radium was used as a face paint in the early 20th century, before its toxicity was well known.

A select number of people, family and friends of the cast and crew, were invited to watch the play in person in Mitchell Hall. The UCO Department of Theatre Arts also utilized online streaming to offer the play to the public.

At-home viewers can stream the play live for free Friday and Saturday at 7:30 p.m. and Sunday at 2 p.m. through UCO On Demand.

“With this option students don’t have to worry about whether they are safe or not, and the theatre department is able to still be active in performing,” said Hannah Randell, a UCO art education student and self-proclaimed theatre fan.

Students can go to streaming.uco.edu to access UCO On Demand. The play is featured on the home page, and those who want to watch can simply click on the icon to begin watching at the start time.

The live-stream is a four camera production that follows the actors to help the viewer understand who is speaking and how the actors interact with each other.