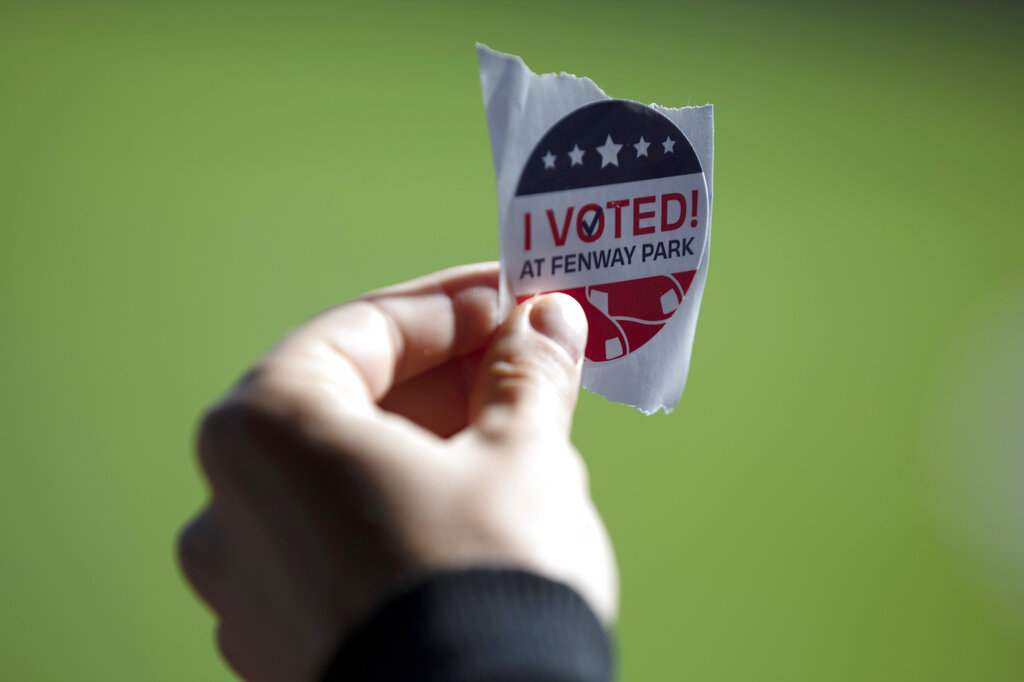 A voter holds a sticker after casting a ballot at Fenway Park, Saturday, Oct. 17, 2020, in Boston. (AP Photo/Michael Dwyer)

The Oklahoma State Election Board is reporting a record-setting number of requests for absentee ballots across the state.

As of Friday morning, the OSEB had received requests for nearly 310,000 absentee ballots, more than any other single election in Oklahoma history. More than 141,000 ballots have been returned to county election boards.

“It’s almost triple what we saw in 2016 during the presidential election,” said Misha Mohr, public information officer for the OSEB.

However, the state of Oklahoma will not allow any of those ballots to be counted until Nov. 3.

Ballot barcodes are scanned once they are received by local election officials to give voters their voter credit history, according to Mohr. The ballots are then locked away until a special public meeting takes place with a bipartisan board.

“That bipartisan board will go through each and every one of those absentee ballots to ensure that they have been executed properly, that the proper ID was attached or that they have been notarized,” Mohr said. “At that point, those ballots are then gathered up, they are run through the machine, and the votes are not actually tabulated though until after 7 p.m. on election night.”

Physically incapacitated absentee ballots are checked for two witnesses to their signature during the bipartisan board meeting as well, Mohr added.

Several changes have been made to absentee ballot handling for the 2020 election.

“Thankfully our legislature was thinking ahead and this past spring they did pass a bill to allow those county election boards to begin processing those ballots earlier than normal,” Mohr said. Under previous legislation, county election boards had to wait until the Thursday before Election Day to begin processing absentee ballots. The new bill allows counties to begin that process earlier, with the approval of OSEB Secretary, Paul Ziriax. Ziriax granted approval for all counties ahead of the 2020 general election.

“That has been extremely helpful for, especially these larger counties, you know Oklahoma County, Tulsa County, Cleveland County, where they’re seeing tens of thousands of absentee ballots come through,” Mohr said. “They’re able to hold multiple meetings as they’re receiving large batches, so that they can go ahead and begin that verification process.”

According to Mohr, this change is one reason Oklahomans will see results on Election Day, rather than having to wait.

“It may be the wee hours of the morning before we get through tabulating all of those, but we will definitely have a pretty good idea of who won in this state on election night,” Mohr said.

Voters have until Oct. 27 to request an absentee ballot in Oklahoma. However, the U.S. Postal Service recommends that absentee ballots be mailed at least one week prior to the deadline that they must be received.

In Oklahoma, mailed absentee ballots must reach county election boards by 7 p.m. on Nov. 3.  This means the deadline to request falls on the same date the post office recommends having your ballot mailed out.

Standard absentee ballots can also be hand delivered to a person’s county election board. This must be done by the end of business day Nov. 2.

Absentee ballots come with specific instructions on how to fill them out correctly. It is important to follow these instructions exactly as there is currently no system in place in Oklahoma to notify voters of a rejected or erroneous absentee ballot prior to Election Day.