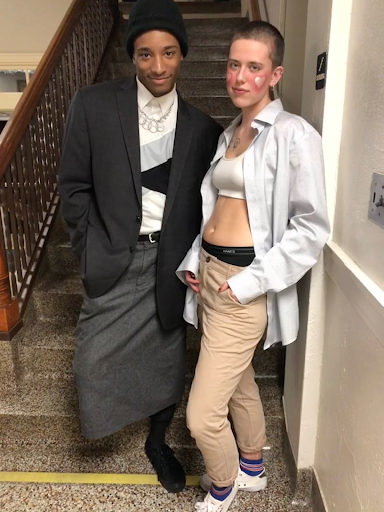 The Palentine’s Passion Show, which took a break last year, is back for 2022 at The Women’s Research & BGLTQ+ Center at UCO. UCO student GP, who works at The Center, is organizing the event this year.

From streetwear to more formal attire and everything in between, the outfits at the Center’s fashion show will showcase diverse aesthetics.

“I think I’m most excited to see the variety of expression within the categories,” GP said.

This year the categories are “Baddies in Business, Hit the Streetwear, Valentine’s Vintage, and Freestyle,” GP said.

During the “Freestyle” category, there will be an opportunity to walk for anyone who did not sign up to model but would like to.The fashion show will be held at the Center on February 14 at 6 p.m. The Center is looking for participants until Feb. 11. If you are interested in modeling or volunteering to set up for the fashion show, contact GP at spayne22@uco.edu.

All of the clothing for the fashion show comes from the Center’s community closet, a free place to acquire or donate gently used clothing. Both UCO students and other members of the community are welcome.

In an honors thesis from Bucknell University titled “Undressing the Power of Fashion: the Semiotic Evolution of Gender Identity By Coco Chanel and Alexander Mcqueen,” Sveva Marcangeli follows the history of gender’s connection to fashion.

Maracgeli writes that “by individually manipulating the act of clothing and adorning oneself with repetitive signs one can challenge the gendered system,” citing Judith Butler, an influential feminist theorist, as claiming that “since culture imposes gendered expectations on the clothing deemed appropriate for women and men, the individual can use clothing that defies gender expectations to assert personal identity and to critique culture’s values and methods of enforcing those values.”

One fashion theme that might appear at the show is the camp aesthetic, currently appearing on BLGTQ+ TikTok and other social media. In an honors project from Seattle Pacific University titled “From Marginal to Mainstream: The Queer History of Camp Aesthetics & Ethical Analysis of Camp in High Fashion,” Emily Barker discusses a shift in fashion as well as the aesthetic.

“Today, High Fashion is influenced by street fashion just as much as it takes part in shaping it. Previously, designers would create clothes, put them on movie stars, and finally the average person would wear them. It was strictly a trickle-down process. Upper class and lower class fashion was always made distinct, dating back to sumptuary laws in France which dictated which colors or styles poor people were not allowed to wear,” Barker writes, citing the rise in fast fashion and the ability of “normal people” to become influencers as part of the shift.

Barker goes on to say that “camp’s recent popularization can be attributed to this change in fashion consumption. High Fashion once again turns to the underground and fringe looks for mainstream inspiration.”