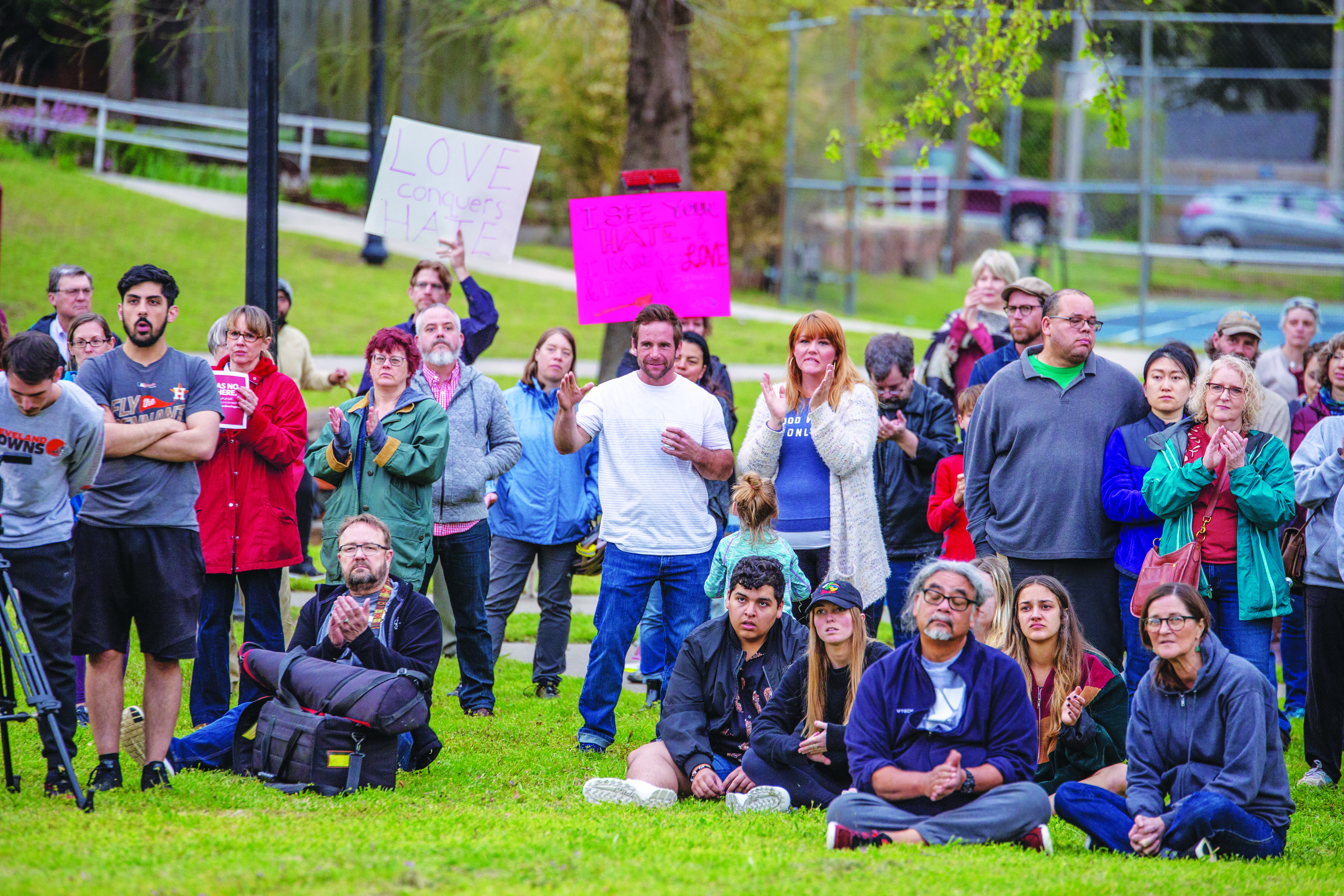 Community members clap and listen in response to a speaker at the “Community Rally: Strike Back with Love” event that took place on April 3 at Lions Park in Norman, Oklahoma. There were nine speakers representing groups from local and national communities speaking at the event. (Tanner Laws/The Vista)

An Oklahoma woman arrested by the Norman Police Department in relation to a recent string of racist vandalism incidents in Norman and Oklahoma is facing five charges so far in Cleveland County.

According to authorities, Allison Johnson, 45, turned herself in and has been charged with four counts of malicious injury to property and one count of malicious intimidation or harassment.

While Oklahoma County has yet to file charges, the investigation began following two incidents that occurred last month in Oklahoma City. The Oklahoma Democratic Party Headquarters and the Chickasaw Nation’s Oklahoma City Area Office were defaced with spray paint that included comments such as “Gas the Jews” and “White planet only.”

These incidents were followed by additional vandalisms that occurred in Norman last week, where Johnson had spray painted racist slurs and white supremacist language over the McKinley Elementary School, the Firehouse Arts Center and the Cleveland County Democratic Headquarters.

It was at the Chickasaw Nation office that security cameras captured the initial footage of Johnson, according to Bo Matthews, Oklahoma City Police Department’s public information officer. Johnson was then captured again in footage during the Norman incidents, which contributed to her apprehension by police last week.

In response to these incidents, a rally was organized last Wednesday by Norman’s Ward 6 councilmember Breea Clark and Ward 8 councilmember Alex Scott. The rally brought hundreds of Norman community members to Lions Park in Norman in an attempt to both heal the community and denounce the acts that occurred, according to Clark.

“Hate has no home in Norman. Though meant to scare people, these ignorant acts of intimidation reeked of fear themselves,” Clark said. “Fear of the change that strengthens our community. Fear of the diversity that enriches our culture. But we Normanites are hearty, resolute and strong.”

“Tonight the Norman community came together. We cried. We hugged. We laughed. WE RALLIED,” Clark wrote on her Facebook page.

Johnson had her first court appearance in the Cleveland County Court on Monday and it remains to be seen if Oklahoma County will press additional charges in relation to its own vandalism cases.