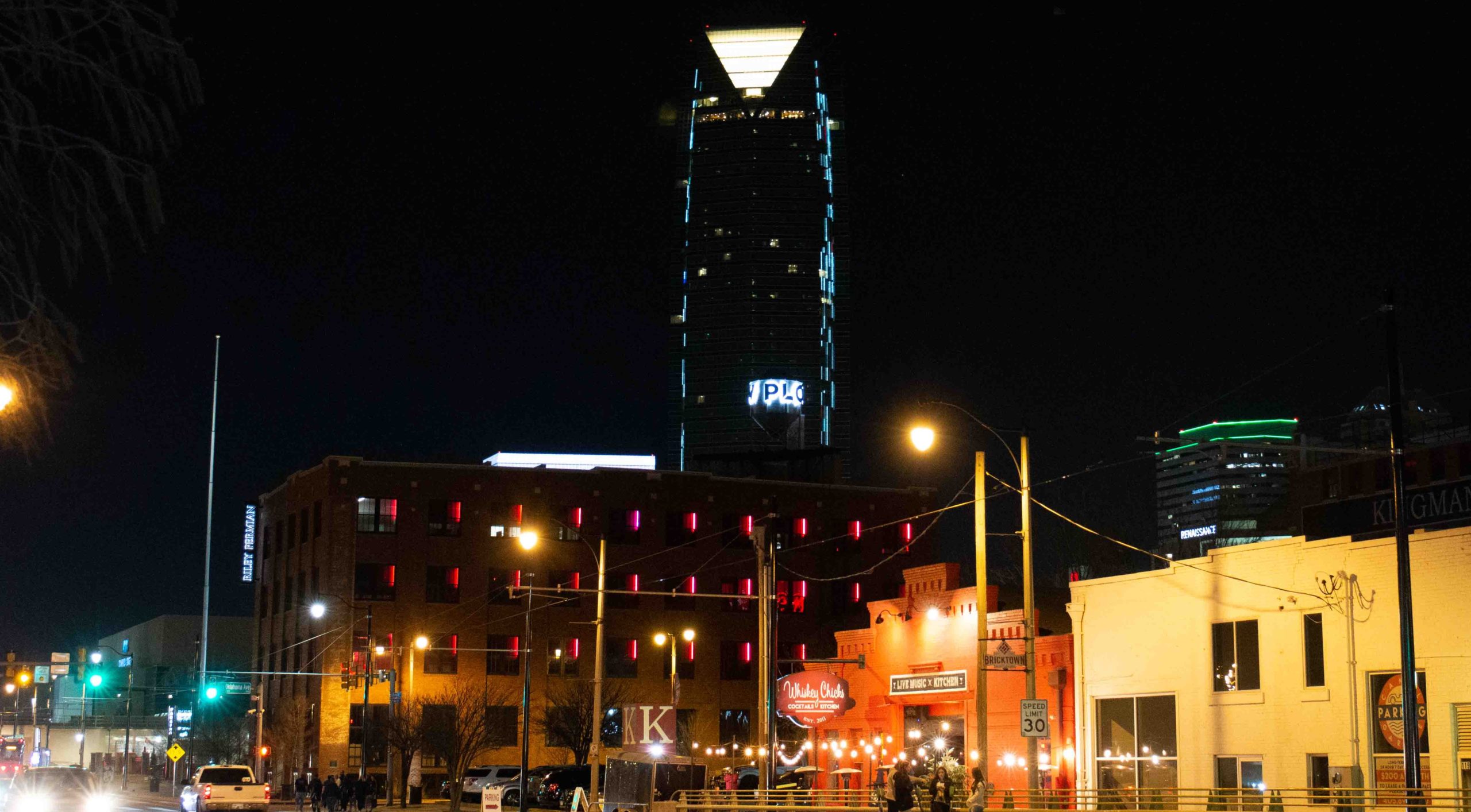 People are walking, gathering and driving in downtown Oklahoma City on March 7, 2020 before Gov. Stitt issued the 'safer-at-home' order due to COVID-19. On April 22, Gov. Stitt announced a plan to begin reopening the state in phases. (Jeff Elkins/The Vista)

Oklahoma Among States Beginning to Reopen

The United States is in the middle of a pandemic-fueled economic crisis, and some states including Oklahoma have taken steps to undo shelter-in-place and stay-at-home orders to reopen the economy.

In Tennessee, a majority of businesses will be able to open May 1. In Georgia, hair salons, bowling alleys and other businesses considered non-essential opened April 24.

Phase one began April 24 with the opening of state parks and recreation areas. Personal care and pet grooming businesses can reopen for appointments only, provided they “adhere to strict sanitation protocols,” Stitt said.

On May 1, gyms, places of worship, dining rooms and entertainment-based businesses can open if they operate under the Centers for Disease Control and Prevention guidelines regarding distance and sanitation.

If hospital and incident rates remain at a manageable level, phase two will go into effect May 15.

Phase two will allow bars to operate under reduced capacity and also permit weddings and funerals with more than 10 people to resume with social distancing in place.

Phase three is still being developed at this time.

The pressure is mounting to reopen as the U.S unemployment rate continues to rise, with 26 million claims from March 15 through the week ending April 17.

Brian Mullins, CEO and co-owner of Rose Rock Realty, said from what he has seen, the primary industries hit by unemployment have been the service and hospitality industries, but once these industries open up, things will come back relatively quickly.

“They may not return to the level they were before, but they will return a big chunk in a short time once states reopen,” Mullins said.

Homebase and Bureau of Labor Statistics data show the amount of hourly wage employees working is down 59 percent as of April 24.

“As we continue to open up here I think that we will be able to get life back to normal fairly quickly if we want to,” Mullins said. “We may see an uptick in cases, but the good thing is, from what I am seeing, our hospitals are able to handle that and we have discovered a lot more about how to treat the virus at this point for people who do end up needing the medical intervention.”

On April 22, Stitt said hospitals in the state have 15 times the amount of beds as patients with the disease.

Thomas J. Duszynski, director of Epidemiology Education at the Richard M. Fairbanks School of Public Health at Indiana University–Purdue University Indianapolis, said there are steps that need to be taken in order to reopen the economy.

“First, we have to understand what part of the pandemic are we in, are we in the beginning, middle or the downside?” Duszynski said. “Clearly where we want to be before we reopen anything is on the downside.”

The number of cases declining is what’s needed and would signal a few things, according to Duszynski.

Duszynski said the next thing that needs to happen is more testing.

According to Duszynski, the duration hasn’t been determined yet, but what it well tell us is how much disease was in a particular area, which will lead to a better understanding of where we are at in the infection period.

Diagnostic Laboratory of Oklahoma has a COVID-19 immunoglobulin G (IgG) antibody serology test which can identify individuals who have developed a serological response to the COVID-19 infection.

“We can’t just fling the doors open and everything is back to the way it was; I think if we do that, that’s a mistake,” Duszynski said. “I think that we have to kind of understand how to do this in a sequence that makes the most sense to protect the most individuals, which will include still some social distancing guidelines, or physical distancing guidelines.”

If there is an increase in cases and mortalities after restrictions are loosened, Duszynski said we might need to take a step back and wait a little bit longer before we open things.

The final thing that needs to happen is contact tracing, according to Duszynski.

“I use the analogy of a forest fire. What we want to do is get to that little burning ember first, before it has a chance to spread,” Duszynski said. “So in contact tracing, we get to those individuals that have been identified through testing as actively ill, we isolate them and make sure they can’t spread disease.”

The purpose of this, Duszynski said, is to find out who a person has been in contact with and may have potentially exposed during their infectious period so that those people don’t infect others.

Most states, including Oklahoma, saw the virus hit more populated areas before spreading to rural counties.

Duszynski noted the same in Indiana, where Indianapolis was a week or two ahead of everywhere else in the state. He said Gov. Eric Holcomb is partnering with seven other governors of the states that surround Indiana, and the idea here is that they come to some sort of consensus as to when and how to open businesses.

“So that what we don’t see happening is, ‘well geez, Indiana is wide open, let everybody from Illinois go into Indiana and go to dinners and movies’ and things like that, or vice versa,” Duszynski said.

“…Let’s all agree on how to do this so that we don’t see populations moving from state to state or area to area possibly spreading disease,” Duszynski said.