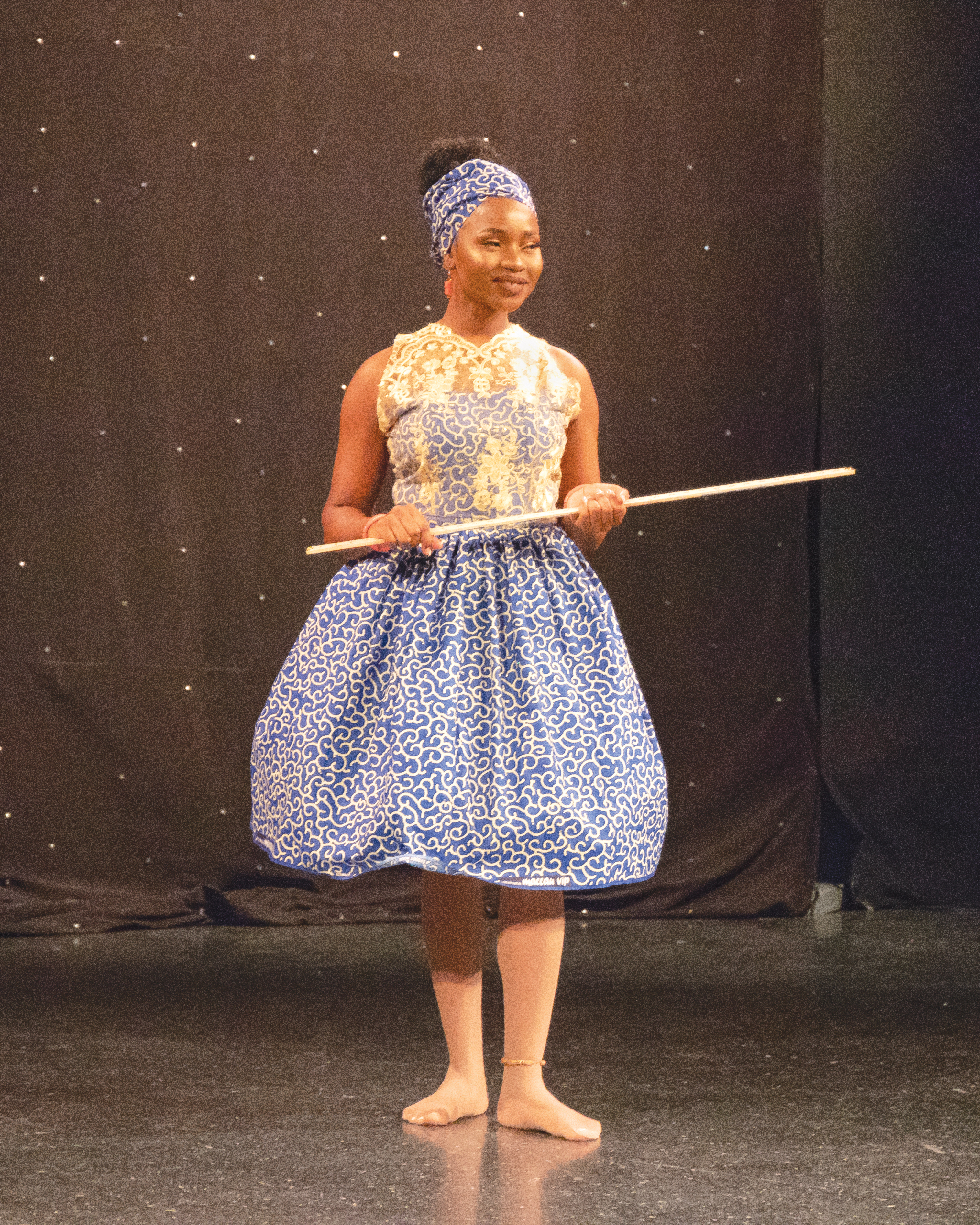 Victory Ogunbanwo performs her talent, a monologue on being an African-American immigrant at the 2019 Miss Black and Gold Pageant held on Jan. 27 in the Nigh University Center’s Constiution Hall. (Vy Luong/The Vista)

Victory Ogunbanwo, a junior student from Nigeria majoring in forensic science and accounting, was crowned Miss Black and Gold 2019-2020 at the Miss Black and Gold Scholarship Pageant on Sunday at the University of Central Oklahoma’s Constitutional Hall.

The pageant is hosted by the Zeta Sigma Chapter of Alpha Phi Alpha Fraternity Inc. to designate outstanding young ladies to serve as Chapter Sweethearts. According to Christian Coleman, chapter secretary, the pageant has been hosted annually for more than 40 years.

“The pageant is a good opportunity for students to get a diversified view and overall contribute to an inclusive Greek society here at the University of Central Oklahoma,” Coleman said.

Join the men of the Zeta Sigma Chapter for the unveiling of their Miss Black and Gold Scholarship Participants and Her Melanin Rocks Awards! pic.twitter.com/NtyGypgHRV

“I decided to join the Miss Black and Gold system because of how warm and welcoming the people in charge of the pageant were,” Ogunbanwo said. “The men of Alpha Phi Alpha are known for their involvement in the community and I wanted to be a part of that.”

Ogunbanwo won a $1,000 scholarship along with an official trophy, sash and crown. She also won the Miss Congenitally Award and the Director’s Choice Award.

“I felt very shocked. It didn’t seem real,” Ogunbanwo said. “But I am very happy to have receive all the awards.”

During her reign, she will promote her platform called Be“YOU”Tiful to help people love and appreciate themselves. She will be working with various offices and organizations on campus to execute Be“YOU”Tiful in the UCO community.

Ogunbanwo, along with four other ladies, had prepared for the pageant for over three months. Judges evaluated the winners through a pre-show interview, swimwear, talent, evening wear and on-stage question.

“I chose to perform my talent ‘lessons on being an African immigrant in America’ because it tells my story in relation to some of the experiences I have had as an immigrant,” Ogunbanwo said.

Ogunbanwo also made the dress she wore for the talent competition. She said she started learning how to sew in high school in Nigeria. She enjoys sewing and being creative with the clothes she makes and wears. She also has a business called Garmentory.

“I am so grateful for all the support I received from in the weeks leading up to the pageant,” Ogunbanwo said. “I am so blessed to be surrounded and supported by so many amazing people.”

Kristi Rose, a junior majoring in finance and psychology, won the crown of Miss Zeta Sigma, a chapter title for the first runner up. She received an official trophy, sash and crown. Tynana Harris won the People’s Choice award and Domonique Brunner won the Business Woman of Tomorrow award.