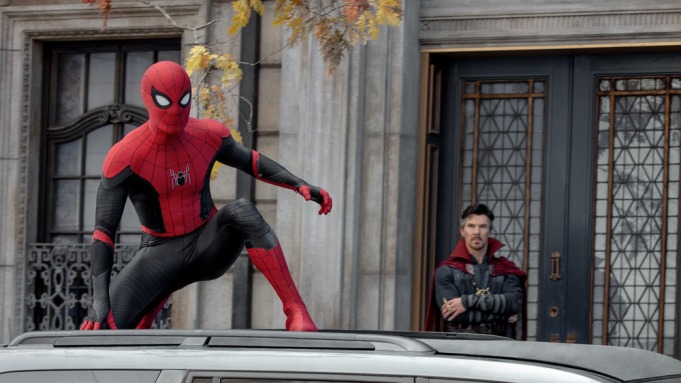 When Thanos’ snap in Marvel’s Avengers: Infinity War wiped off half of the world’s population, including Spider-Man’s own Peter Parker, the second installment of actor Tom Holland’s Spider-Man series left off eight years after the population returned. Spider-Man: No Way Home keeps with this plotline and picks up from its predecessor, Spider-Man: Far From Home. The previous film ends in Times Square, where Parker’s identity as Spider-Man has been revealed, and No Way Home resumes at that exact place in time. The playful nature of the franchise caters to younger audiences in more ways than it seems, and the use of continuity in the films provides a more television-like feel in the growing age of streaming and binge-watching.

But the series runs into a repeated problem that paramounts in No Way Home: the loss of high stakes. How can anything compare to the world almost ending a few years prior? The revelation of Parker’s secret identity causes public uproar and an FBI investigation into Parker and his acquaintances, but the seriousness of this conflict falls flat within 20 minutes of the 2 ½ hour movie. Yes, a brick was thrown through his bedroom window (by an everyday, disgruntled New York resident), but that is nothing compared to the intergalactic battles with the big, purple alien Thanos. Of course, the FBI investigation is not a light conflict, but Parker treats it as such. He becomes more concerned about its implications for his friends’ college acceptances into Massachusetts Institute of Technology, and proceeds to ask wizard Dr. Strange (Benedict Cumberbatch) to cast a spell that would make everyone forget he is Spider-Man. But Parker learns fast: you can’t have your cake and eat it too. He wants to pick and choose who knows he is Spider-Man, like his girlfriend MJ (Zendaya) and his Aunt May (Marisa Tomei), and ultimately causes complications to the spell.

As the errored spell and its repercussions consume the narrative, and Parker’s revealed identity becomes the subplot, the movie really starts to shine. Marvel ramps up the “multiple universes” theme, and uses this magical mistake to bring back memorable characters from the previous Spider-Man series to this new timeline—particularly the villains. Norman Osbourne’s Green Goblin (Willem Dafoe) from the 2002 Spider-Man and Electro (Jamie Foxx) from the 2014 The Amazing Spider-Man 2 return with three other villains from the series. This makes a drawn-out franchise feel new and fun, but No Way Home definitely caters to the Marvel fan. The nostalgia peaks for avid watchers when actors Tobey Maguire and Andrew Garfield pop up on the big-screen to assume their former roles. There’s a certain chumminess between the three Spider-Men and villains that is satisfying, and the line between hero and villain becomes less defined (in a good way).

Spider-Man: No Way Home keeps to the Marvel formula of quick wit, charming sentiment and high action. While some movies promote critical thought and reading into symbolism, No Way Home is simply for the pleasure of entertainment. Garfield’s character got his redemption by saving a falling MJ, something he could not do with his girlfriend Gwen (Emma Stone) in The Amazing Spider-Man, and Maguire’s Spider-Man gave grieving advice to a young Peter Parker after losing his uncle in Spider-Man 2. The series remains lighthearted in all the ways it used to, and although it probably won’t be the last we see of Peter Parker, the dialogue and touching moments made the film feel like the last episode of a long-running television series: warm and familiar.