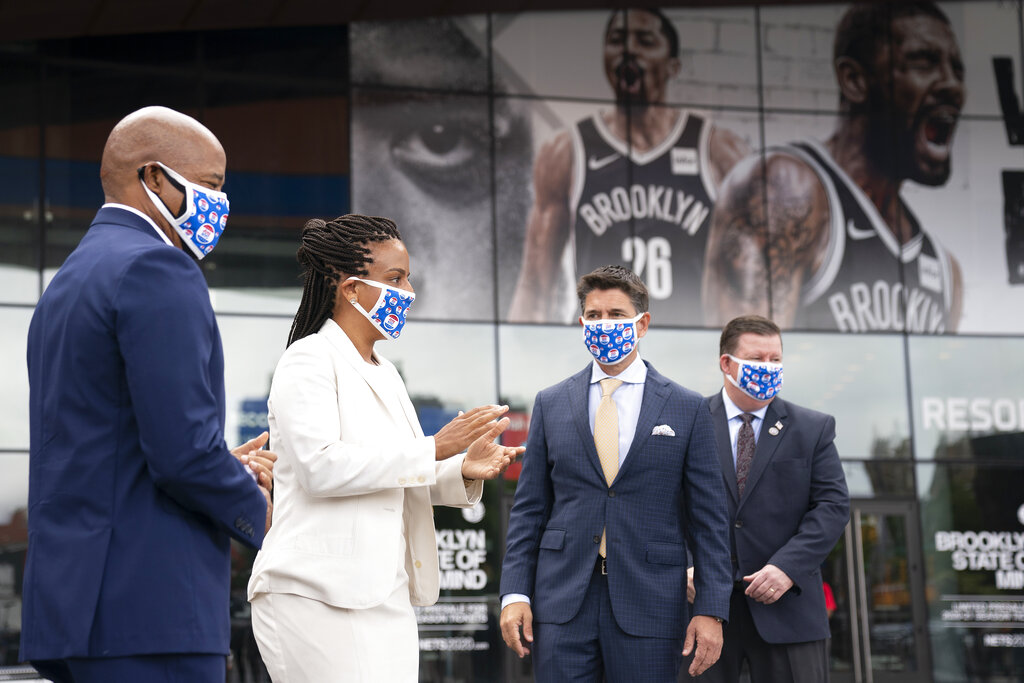 From left, Brooklyn Borough President Eric Adams, NYC Council Majority Leader, Laurie Cumbo, John Abbamondi, CEO of BSE Global, and Michael Ryan, Executive Director of the NYC Board of Elections, announce that the Barclays Center will be an early voting site, Sept. 1, 2020 in the Brooklyn borough of New York. Early voting will be held at the sports and entertainment venue Oct. 24 through Nov. 1. (AP Photo/Mark Lennihan)

The majority of the sports world came to a screeching halt for the second time in 2020 last week. Similar to the days after March 11, when Utah Jazz all-star Rudy Gobert tested positive for COVID-19, no NBA games were played.

This time in protest after another officer involved shooting. Jacob Blake, 29,  was shot seven times in his back during an altercation with the Kenosha, Wisconsin, Police Department.

In reaction to the shooting, the Milwaukee Bucks refused to play their playoff game against the Orlando Magic. Eventually leading to the rest of the NBA playoff teams to boycott their games as well.

Less than 48 hours after the protesting of games began, the NBA and National Basketball Players Association released a joint statement revealing they are working with the team governors to turn all NBA arenas into voting sites during the elections on Nov. 3.

Cities whose teams own the arenas are partnering with the NBA to bring this initiative to arenas across the league. Other teams, like the Oklahoma City Thunder, whose arena is owned by the city, are working with the local government to use Chesapeake Energy Arena as a voter registration location.

According to the team’s press release, they will be using the arena downtown for voter registration every Saturday starting Sept. 14 through the deadline to register to vote Oct. 9 for this year’s presidential election.

The arena will be open from 10 a.m. to 1 p.m. Saturday, and will have computers, printers, postage and voter tools.

At UCO, students and staff cannot vote on campus. However, according to Laura Butler, UCO’s legislative liaison, they have reached out to the state to be a polling location but have never been selected by the Oklahoma State Election Board.

Students who register to vote using their campus address will go to the polling site the State Election Board has designated for this area, said Butler. All of the resources can be found on the UCO Public Affairs website.

As of right the only options are absentee ballots or visiting the polling location designated by the Oklahoma State Election Board. According to the election board website, all voters need to do is attach a copy of a valid photo ID, or voter identification card, and sign.