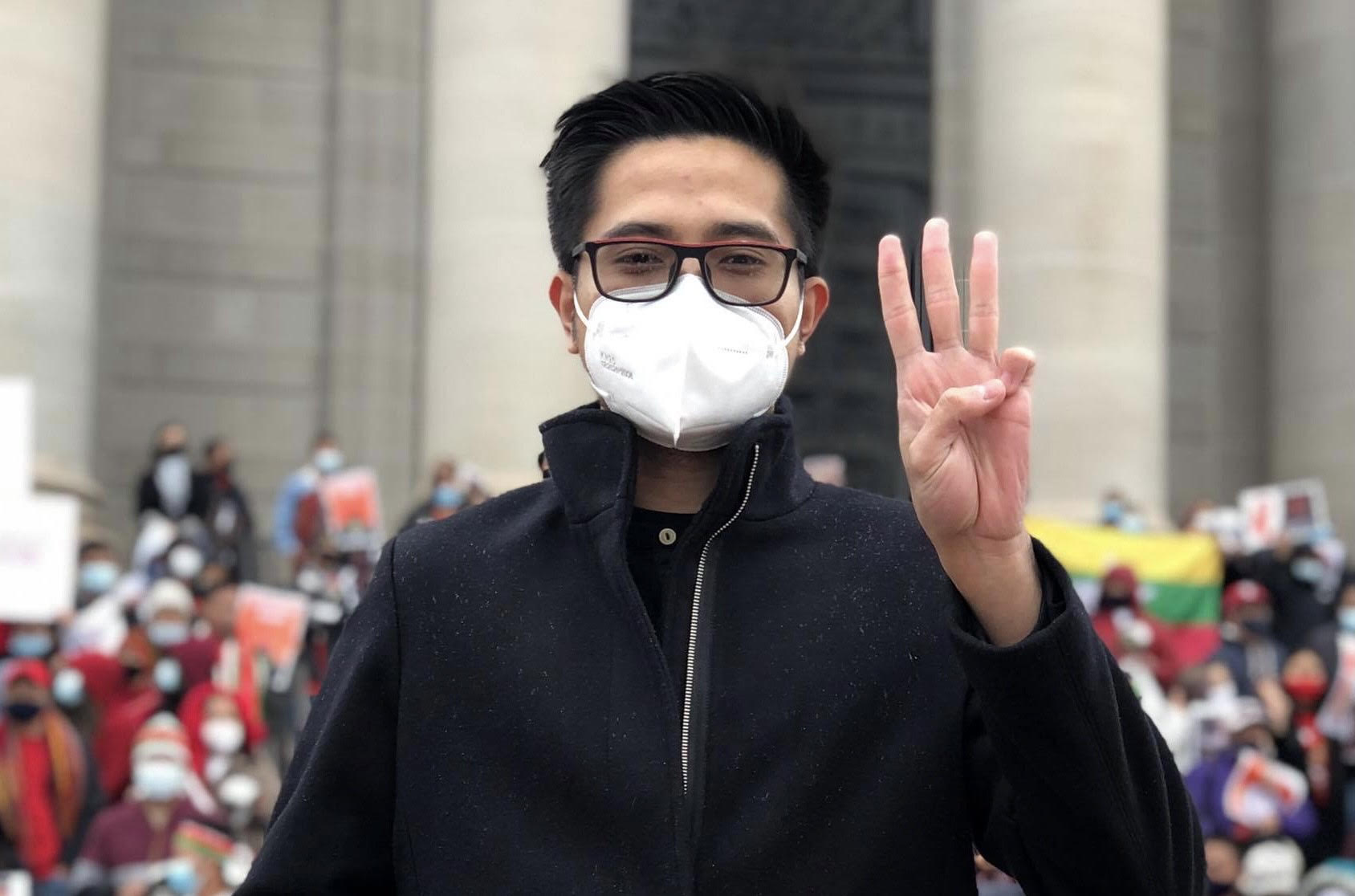 Han Seth Lu stands outside the Oklahoma State Capitol during the “Solidarity With Myanmar” rally on Feb. 6. He holds up a three-finger salute, a popular symbol for resistance and solidarity in South East Asia. (Provided/Han Seth Lu)

Myanmar Military Coup: UCO student risks being an enemy of the state

“I tell myself it’s a zombie apocalypse, with the zombies being the military,” UCO senior Han Seth Lu said. “It’s how I’ve been coping with everything.”

The international student from Myanmar recalled the chaos that unfolded in his home country this month after the Myanmar military staged a coup while he was over 8,000 miles away in Oklahoma. However, none of this surprised him as military rule was something he grew up under for 14 years of his life.

Myanmar, formerly known as Burma, spent decades under a military dictatorship following two coups in 1962 and 1988. It would not be until 2011 that the military junta was officially dissolved, and the Burmese people would finally gain democracy.

“Since I was born within the military dictatorship era, I didn’t really know what it was like to have freedom,” Han said. “We had a lot of restrictions and rules to follow, but everything just seemed normal.”

Han grew up in a family that were strong supporters of the National League for Democracy (NLD), a pro-democracy political party that was established in 1988. As a child, Han remembered times where the electricity in his neighborhood would go out, which meant that the military was going to show up at his home, looking to arrest pro-democracy advocates.

“I vividly remember that they would come into our house with a lot of military trucks,” Han said. “They would talk to my parents, and they would sometimes search our house because they thought we were hiding these people.

“It was pretty much a norm for me.”

Han said he found his education under military rule to be “problematic.” All schools were nationalized after the 1962 coup. Han said the curriculum would be set by the military regime and applied to schools across the country. Private educational institutions would not be allowed until 2013 after the military rule was over.

“There was a lot of manipulative and brainwashing material put into the curriculum,” Han said. “The learning materials were somewhat nationalist, like you were taught that being Burmese is the best thing.”

Han also said that students were discouraged from participating in community service projects and studying the social sciences.

“Everywhere you go, the teaching was the same,” Han said. “They’re trying to frame everyone to be the same person.”

Han would get his first taste of education outside of the nationalized curriculum after graduating from high school.

After the U.S. lifted sanctions on Myanmar, Han was accepted to the English Access Microscholarship Program (https://exchanges.state.gov/non-us/program/english-access-microscholarship-program) in 2013, a two-year international program created by the U.S. Department of State for disadvantaged students, where he learned English, civic engagement and service learning.

After that, Han was accepted to the 2014-2015 Burma Youth Leadership Program (BLYP), where 20 selected students would study leadership and citizen action in the United States at Indiana University for four weeks. Under the program, Han chose education as his focus.

During his time in Indiana, he shadowed classes at the university and at a local high school. It was then that Han would realize, “Crap, the education I went through in Myanmar wasn’t actually education.”

When he came back to Myanmar, Han co-founded the Noor Education and Community Center (https://www.facebook.com/nooreducationalschool/) with other BYLP education-focused alumni in his hometown of Bago. The center would provide training to local teachers and teach languages, social science and leadership to students aged 6-17 years old.

All these factors would give Han the drive to pursue an early childhood education major and a leadership minor at the University of Central Oklahoma.

Han last saw his family when he traveled home to visit during the summer of 2019. Now, he is uncertain of when he will see them again.

On the morning of Feb. 1, the Tatmadaw, Myanmar’s military staged another coup d’état and deposed the democratically elected members of the ruling party, the NLD, including President Win Myint and State Counselor Aung San Suu Kyi. The Tatmadaw then declared a year-long state of emergency under claims of voter fraud in the November 2020 general election and planned to hold a new election at the end of the state of emergency.

All of this happened the day before the Parliament of Myanmar was due to swear in the members elected in the November election.

Over the past month, Burmese people launched the Civil Disobedience Movement and held protests across the country in response to the military junta. The Tatmadaw implemented various strategies in retaliation, including enforcing a nationwide communication and internet blackout, blocking off local news channels, releasing tens of thousands of prisoners, and arresting and threatening the use of violence against protestors. At least two protestors have been shot dead by riot police. Han also said the military announced that those who speak out against the regime will be labeled as “enemies of the state.”

The coup has gained international attention, with various world leaders calling for the restoration of democracy and asking for the immediate release of Suu Kyi and other Burmese leaders. President Joe Biden ordered new sanctions against the military regime Feb. 10, which would prevent them from accessing $1 billion in assets in the U.S.

Burmese communities across the U.S. have also been speaking out against the coup, including California, Iowa, New York, Texas and Wisconsin. Han would co-organize one of the two protests in Oklahoma.

“I am standing here today to demand the release of Aung San Suu Kyi and other civilly and democratically elected officials,” said Han, in a speech at the Feb. 6 “Solidarity with Myanmar” rally at the Oklahoma State Capitol. “If we want to stand up against injustice, we can still condemn her actions but we still need to condemn the injustice happening to her.”

Due to the volatile situation in Myanmar, Han said he has had to cut ties with his family for their safety.

“Given the fact that my family has an active political history, the military could retaliate against them if they knew I still had active communication ties with my family,” Han said.

Han’s family will no longer be able to wire money to him for his tuition. While he has been financially independent since his sophomore year, Han said he is in discussion with the Office of Global Affairs to sort out his tuition for his remaining years at UCO.

While he is unable to be home with his loved ones, Han finds his unique position in Oklahoma an advantage to spread international attention and seek help. One of his efforts in doing so is co-moderating an upcoming virtual discussion panel, “Myanmar Military Coup: History Repeating Itself.”

The panel will feature other Burmese students studying abroad, including the U.S., Australia, and the U.K. The panel will be co-moderated by Jarrett Jobe, UCO’s assistant vice president of student leadership, and Amanda Siew, UCentral News’ executive social media producer. The panel will stream live at 9 a.m. Sunday on UCentral’s Facebook page (https://www.facebook.com/UCentral/).

The panel aims to explore the events of the coup and ways the international community could help restore democracy in Myanmar.