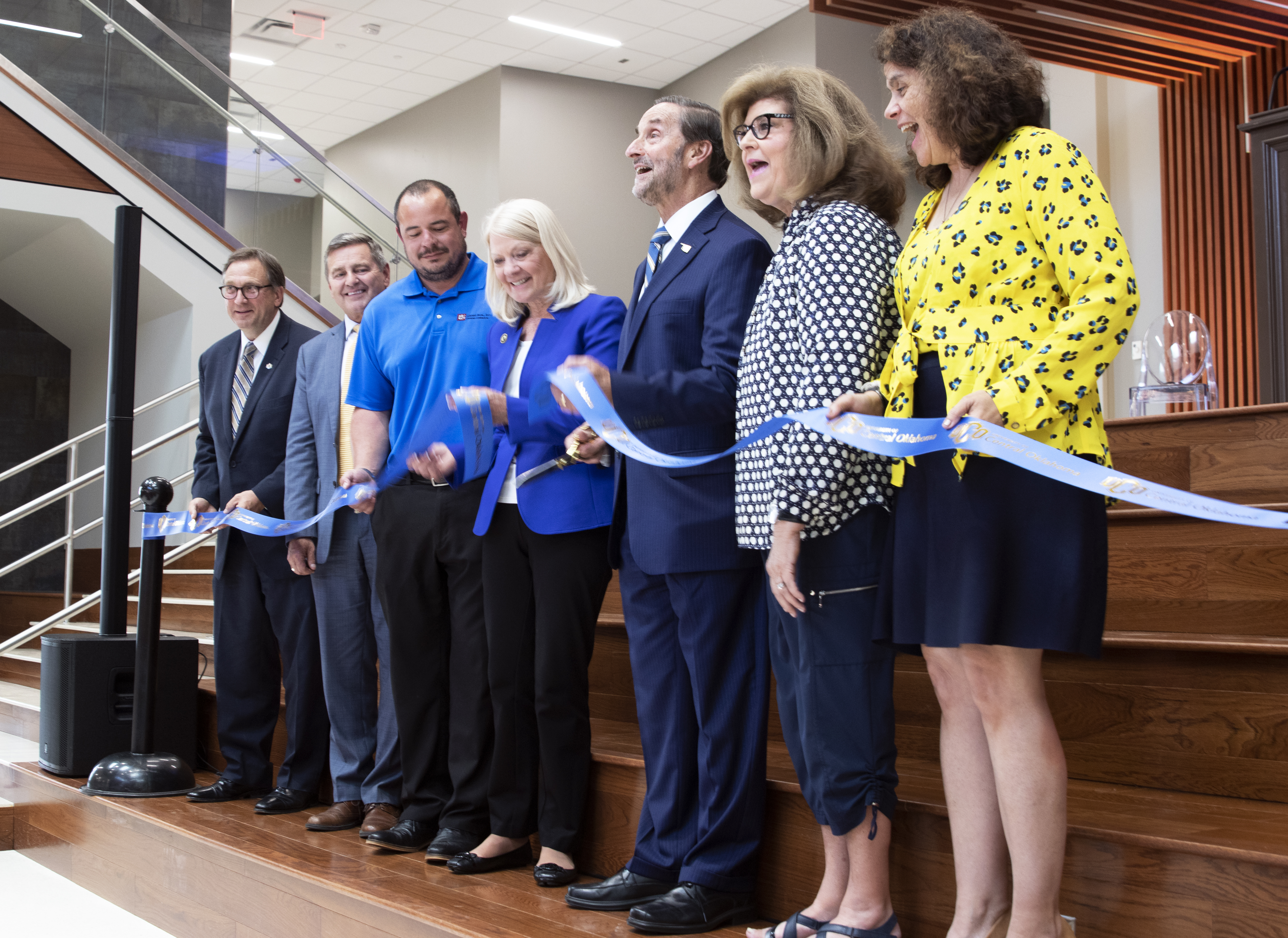 The new south wing of the University of Central Oklahoma’s College of Liberal Arts building is nearing completion, as marked by a ribbon cutting ceremony on June 18.

A private event marking the final stretch, the ceremony gave the first look at the south wing as it nears its grand opening and move-in date in August.

“I [have] been talking about the ribbon cutting as closing on your house, where now it’s yours and you can now move your stuff in, or you might want to do a few more things before you move your stuff in,” said Catherine Webster, dean of the College of Liberal Arts.

The ceremony marked Betz’s last event appearance and speech as president of the university.

“I have such great appreciation of so many that have made a difference for bringing us here today,” Betz said at the ceremony. “This is a wonderful moment for the College of Liberal Arts, it’s a defining moment for the University of Central Oklahoma…This is not a state project, this is a UCO project.”

After the groundbreaking ceremony in November 2017, work began to clear the area and tear down Pegasus Theatre, with official construction starting early in 2018. Now, finishing touches are being made before furniture and faculty can move in starting August 1.

“When we were interviewing the construction management companies…they all said this is a 15-18 month project,” Webster said. “Roughly speaking, we had all 12 months of [2018] and six months of [2019]; that’s about 18 months. Our plan, our goal overall was to be able to hold classes in the fall of 2019 and that’s what we’re doing.”

The $17.5 million 55,000-square-foot expansion has a two-story atrium, 30 faculty and staff offices, 15 classrooms, meeting spaces and study steps with outlets for laptops and USB cords.

“When I first came in this building in its early forms…I looked up and my imagination, even though I’d seen the plans for a long time, my imagination literally soared because I began to think of ‘oh my goodness, what can Dean Webster do with this space,’” Betz said.

A 215-capacity lecture hall that doubles as a storm shelter will serve as a replacement for Pegasus Theatre.

“It’s not a theater, it does not have theatrical lighting or a grid, there’s no curtain,” Webster said. “It’s really meant for, say, readings or conferences, we do have a film screening capability.”

Several events are already planned for the lecture hall, including TedxUCO, the annual Media Ethics Conference, the Chaddlesone Arts and Letter Series, the Liberal Arts Symposium and the university’s annual Collegium on College Teaching Practice, the week before the semester begins.

A coffee bar named the Pegasus Cafe, will open later in the semester and feature barista-made drinks as well as fresh and packaged food.

“There will be somebody who’s going to make coffee drinks,” Webster said. “It’s a Chartwells activity. They’re excited because there’s nothing on this side of campus for them.”

Some work is left to be completed by August, including finishing the final set of study steps, furniture and A/V installation, signage, final inspections and exterior work such as landscaping the south parking lot.

“The biggest setback has been the heavy amount of work we have received over the past few months,” said Kevin Tero, assistant director of UCO Architectural and Engineering Services. “It has impacted landscaping and sidewalk work, as well as the replacement of the south parking lot.”

Tero was credited by several speakers at the ribbon cutting, including Webster for being “fundamentally essential” to the final outcome of the project. Along with Architectural and Engineering Services and Beck Design, he was key in several ideas, such as designing a split level plan with a four-stop elevator and increased study areas.

“[This] optimized circulation paths and created additional open study areas,” Tero said. “The whole project was a textbook example of how teamwork and shared ideas make a project better.”

A grand opening celebration is set for August 12 when Liberal Arts faculty and staff come back for a meeting, according to Webster. Others from the university will have a chance to see the facility at the Collegium the next day.

Although no opening celebration is planned for students, the building is considered open as of August 1 for students that visit the dean’s office or modern languages faculty, according to Webster. However, there may be a small grand opening for the cafe later in the semester, which students can attend.

The Provost Building Excellence Fund provided a new generator, fire suppression system and a single key access system for classrooms and offices in both wings of the building. Not including these costs, the south wing is being paid for through $3 million of already-collected student course fees and a 30-year, $14.5 million bond that will be paid back through future course fees.

“I feel very spoiled that our college is getting to have this new space available to us and I’m grateful to my predecessors in the dean role who initiated the ideas and the ways to support them, to fund them, because that was already all in place,” Webster said.