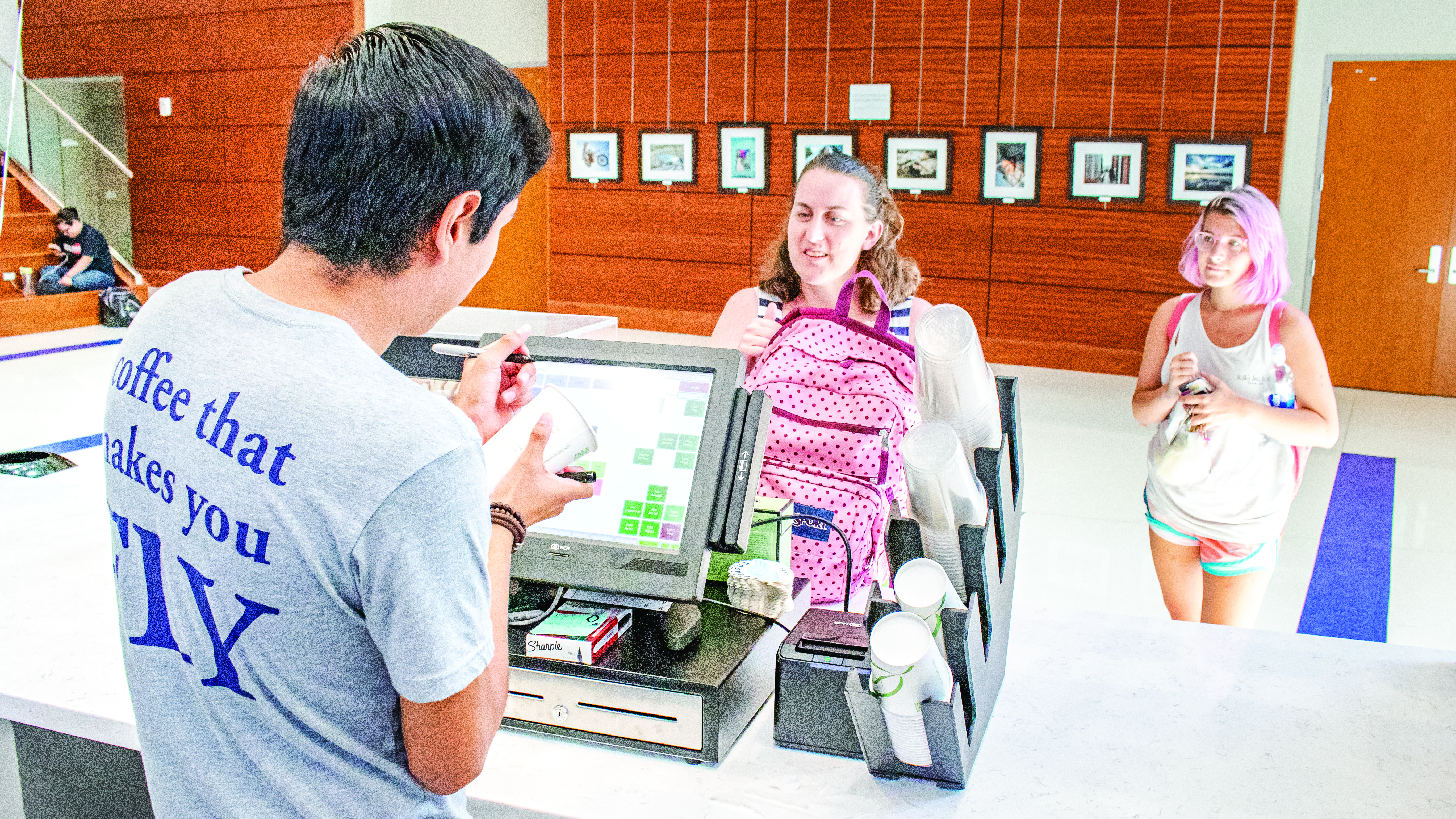 LAR Gets Its Wings: Grand Opening

The College of Liberal Arts South Wing hosted a grand opening for the new Pegasus Café at 8 a.m. Monday, celebrating the 13th available place for students to eat on campus.

“It has a lot of potential,” said Michelle Reynolds, supervisor of the café. “We’re starting out with a really small menu, but from here on out we have a suggestion box so we’re really going to try to listen to students and what they want as far as packaged food goes [and] drinks.”

“Within the next two weeks I’m going to have Italian sodas here so I think that’s going to be a really big hit,” Reynolds said. “We’re going to have pomegranate, blood orange, lemon grass, all those kinds of flavors. It’s starting out kind of small but it has a lot of room to expand because we can do a lot more here since it’s its own thing, so we got a lot of freedom.”

For food options, Reynolds said the café holds “gas station” type pastries, but her goal is to have local stores place their food inside, more geared toward vegan options.

“I really want like Loaded Bowl that’s like an all vegan restaurant in Oklahoma City,” Reynolds said. “I’ve reached out to them already and they’re very interested in partnering with us and having their food here. It’s just kind of getting it to the health standards that UCO has, making sure that it’s packaged properly and able to sell because we want to be able to cook anything here because it’s so small.”

Pegasus is located in the main hallway of the Liberal Arts south wing. It does not provide seating, as according to LAR Dean Catherine Webster it is a “grab-and-go” café. Customers order at the counter and everything is made in the 230 square foot space.

“We’re working with what we have,” Reynolds said. “We’re feeling out what we can do with this space but it’s working ok so far. It’s doing fine we’ve got a full side espresso machine, we’ve got fridges, we’ve got a dishwasher so we can do basically anything.”

The café accepts cash, debit, credit and Flex. However, Pegasus does yet accept meal trades because the café does not carry “actual food” according to Reynolds.

For students who are looking to work at the café, Reynolds said that they can apply for barista positions online at HireBronchos. She said that she prefers to hire UCO students as the two workers she has just hired are student workers.

“I don’t have any open positions at the moment just because we’re not sure exactly what our flow is yet and I just hired two,” Reynolds said. “But in about a month or so I’ll know more about hiring and if I do, I’ll definitely reach to the students for sure.”

“I’m hoping that [students] know that we’re very interested in what they think [and] what they want,” Reynolds said. “I’m listening, we’ve got that suggestion box out there that we’re doing so if students have any sort of suggestions, they can write it down, put it in the box, and then we’re going to read them each week. And if I can get the stuff in here that they want then I’m going to do it.”