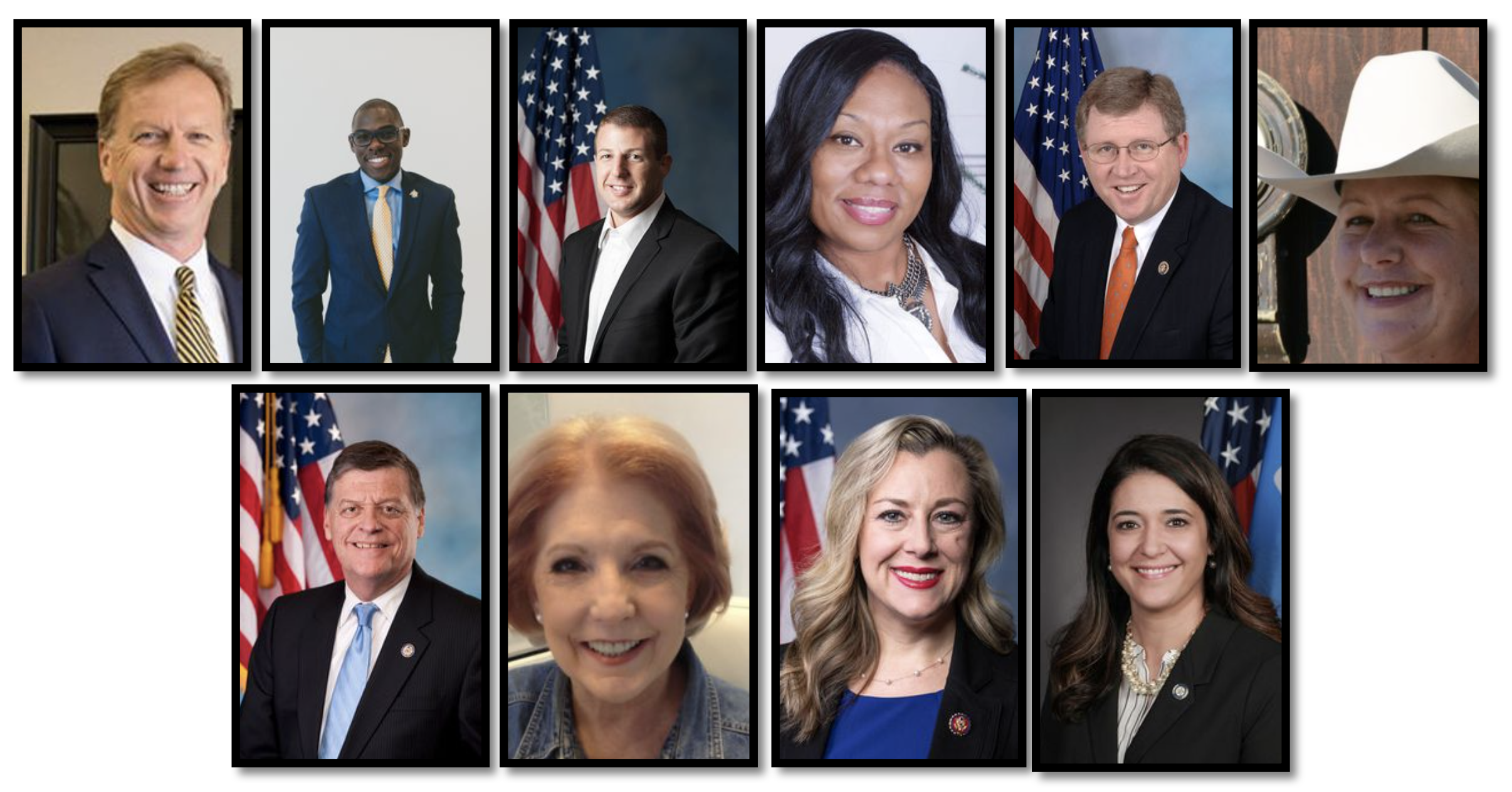 The Producing II class from the Department of Mass Communication at UCO conducted an informal poll with students to find their top issues for the Nov. 3 election. Over 130 students were polled, and here are their topics of most interest: human rights, social justice, healthcare and economy.

Kevin Hern was born in Belton, Missouri. He is a businessman and has held various leadership positions dealing with finance, tax, insurance and more.

Hern assumed office on Nov. 13, 2018. Hern represents the Republicans and is running for reelection to the House.

According to his website, Hern’s key issues are veterans, economy and jobs, budget, family values, immigration and national security. He also believes in protecting Second Amendment rights, life and religious liberty. He is a supporter of President Donald Trump and has voted against Trump’s impeachment. In a statement on social media, Hern expressed his support for Amy Coney Barrett’s confirmation to the Supreme Court in a press release.

Hern supports repealing Obamacare and believes in a free-market driven healthcare system, where healthcare decisions are made between patients and their doctors.

Kojo Asamoa-Caesar was born in Alexandria, Virginia, and is the son of immigrants from Ghana. He is a law school graduate and a Tulsa kindergarten teacher. He was formerly the founding principal of Greenwood Leadership Academy, an elementary school in North Tulsa. Most recently, Asamoa-Caesar served as the interim executive director at 36 Degrees North, the first co-working space in Tulsa.

Asamoa-Caesar has no prior political experience. In a response to Ballotpedia’s 2020 Candidate Connection Survey, he disagreed with a question that asked if it was beneficial for representatives to have prior political experience, saying that it was more beneficial for representatives to “have lived life in the real world in service to others and in service to a cause greater than themselves.”

According to his campaign website, his key issues are education and opportunity, health and economic security, justice and equity, and environment and infrastructure.

On his campaign website, Asamoa-Caesar said that he will “support and defend the civil rights of all people in America, regardless of race, religion, ethnicity, gender, sexuality, age, or physical or mental ability,” as stated under his justice and equity platform. He also wants to protect the rights to access reproductive health care. Additionally, he seeks to respect all sovereign rights of tribal nations and honor all tribal treaties.

Asamoa-Caesar wants to stop over-policing of black and brown communities as part of his justice and equity platform, according to his campaign website.

Asamoa-Caesar wants to achieve universal healthcare for all Americans.

As part of his health and economic security platform, Asamoa-Caesar wants to cancel all student loan debt and eliminate tuition at public colleges and universities. He also wants to “raise minimum wage to a living wage.”

Markwayne Mullin, a business owner and former mixed martial arts fighter from Westville, Oklahoma, assumed office on Jan. 3, 2013. He represents the Republican party and is running for re-election to the House for a fifth term.

Mullin is a member of the Cherokee nation and is one of four Native American members of the 116th Congress.

According to his website, his key issues are defense and national security, economy and jobs, education, energy, foreign affairs, health issues, Native American affairs, spending cuts and debt, tax reform and veterans issues. Mullin expressed his support for Amy Coney Barrett’s confirmation to the Supreme Court in a press release.

According to his economy and jobs platform, Mullin wants to cut government spending, reform tax code and end regulations that restrict the private sector from creating jobs.

Danyell Lanier was born in Tahlequah, Oklahoma, and is a citizen of the Cherokee nation. She is a post-Gulf War navy veteran with a background in logistics and healthcare. She was honorably discharged in 1999 with plans to start a family and received five medals for her five years of service.

She calls herself a “passionate advocate for veterans and victims of domestic violence.” Her campaign was endorsed by the Oklahoma Democratic Party Veterans Committee and the Collective PAC.

According to her campaign website, Lanier’s key issues are protecting resources, improving health, investing in America and justice reform.

Lanier has expressed her support for the LGBTQ+ community on her Facebook page. Most recently, she wrote “I am here as an ally for the (LGBTQIA+) community” on Oct. 11, National Coming Out Day.

Lanier wants to fight for better healthcare and funding to obtain sufficient medical resources for people in rural Oklahoma. She says that “everyone deserves access to affordable quality healthcare.”

Frank Lucas was born in Cheyenne, Oklahoma. He graduated with a degree in Agricultural Economics from Oklahoma State University in 1982.

Lucas has been in office for 17 years. He was first elected to the House to represent Oklahoma’s 6th congressional district, but it was eliminated in 2003. Before serving in Congress, he served in the Oklahoma House of Representatives for 5 1/2 years.

Lucas is running for reelection under the Republican Party. His reelection has been endorsed by President Donald Trump and the Oklahoma Farm Bureau.

According to his website, Lucas calls himself a “crusader for the American farmer.” His issues are agriculture, defense and national security, economy and jobs, health, immigration, lower taxes and government spending, protecting social security, real energy solutions and veterans affairs.

Lucas expressed support for the confirmation of Amy Coney Barrett to the Supreme Court in a press release.

Lucas aims to “put money back in the pockets of American people.”

According to his economy and jobs platform, Lucas wants to cut down on government spending and cut taxes on American families and small businesses.

Zoe Midyett was born in Tucson, Arizona. She is running on a Democratic platform against incumbent Rep. Frank Lucas. She calls herself a “Rural Ranch Democrat” and a voice for rural America.

Midyett, a small business owner and hobby farmer and rancher, is also a member of the Medical Reserve Corps, where she assists Oklahomans with tornado and other disaster recovery efforts. She hopes to make funding for natural disaster relief a priority if she gets elected.

According to her website, her issues are education, rural healthcare, agriculture, small business, diversity in action, minimum wage, voting rights, gunsense and energy.

On her website, Midyett said she will “work for Americans of all faiths, races, genders, sexual orientation and creeds.” She also expressed her support for the LGBTQ+ community, saying “it’s time to give all Americans equal rights.”

Midyett states that she will fight for a diverse community and recognizes the lack of diversity in action. On her website, she called out several instances of racial injustice, including the killing of Ahmaud Arbery and remarks made by President Donald Trump against communities of color.

Midyett is for expanding Medicaid in Oklahoma to help rural hospitals.

Midyett wants to achieve greater income equality and increase minimum wage to a living wage for all Americans.

If she were to be elected, Midyett said she will promise transparency and oversight into taxes and promise legislation that will support small business owners.

Tom Cole, a former European history professor at the University of Oklahoma born in Shreveport, Louisiana, has been in his position for 17 years. He is running for reelection under the Republican Party.

Cole is a member of the Chickasaw nation and is one of four Native American members in Congress. He serves on the House committees on Appropriations and on Rules.

In a press release, Cole expressed his support for the confirmation of Amy Coney Barrett to the Supreme Court.

Mary Brannon, a former school counselor and teacher born in Ada, Oklahoma, is running on a Democratic platform against incumbent Rep. Tom Cole.

According to her campaign website, Brannon “absolutely supports Oklahoma schools, protecting Social Security/Medicare/Medicaid, our Veterans, as well as providing transparency in government. Her key issues are for veterans to be a priority, returning tax cuts to where they were, social security and Medicare to stop getting cut, and affordable health care.

Brannon says she believes in returning tax cuts and taxing the richest 2 percent.

Horn, a Chickasha native and an attorney, assumed office Jan. 3, 2019 after defeating Republican incumbent Steve Russell in 2018, thus becoming the first Democrat to take the seat in 44 years.

According to her campaign website, her key issues are education, healthcare, fixing our broken politics, economic opportunity, veterans and military, energy and infrastructure.

Horn cosponsored the George Floyd Justice in Policing Act of 2020. She was the only representative from Oklahoma to do so and vote in favor for it.

Bice is pro-life. She was endorsed by Oklahoma Right to Life. According to her website, she has supported pro-life policies and advocated against those that promote abortion in the Oklahoma State Senate.

Fighting for affordable healthcare is one of Bice’s key issues. She opposes Medicare-for-All. If elected, Bice will work toward patient-centered healthcare where families will have the power and control to make decisions about their own healthcare.