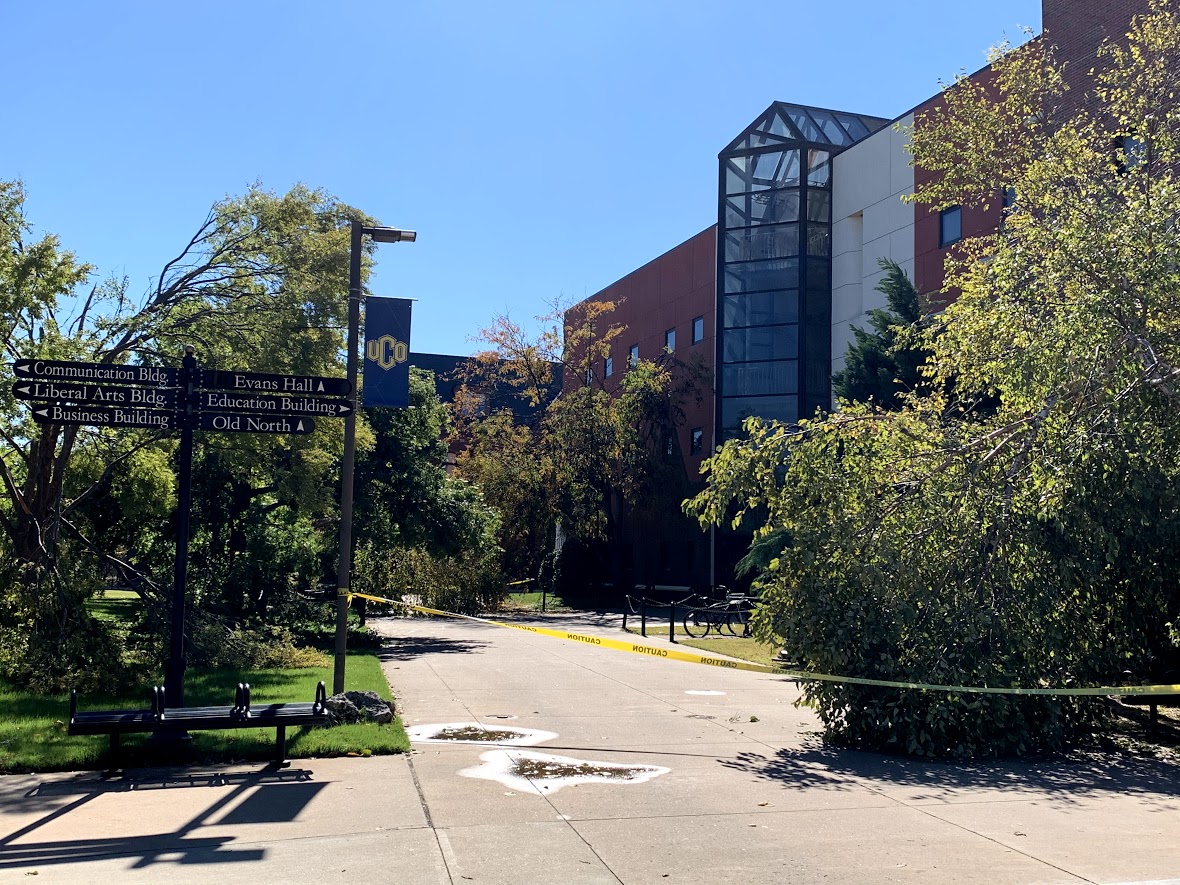 Trees on the University of Central Oklahoma received extensive damage from the recent ice storm. The campus was shut down for nearly a week during the storm, while Edmond, and surrounding cities lost power. (Tyler Whitehead/UCentral)

Thousands of Oklahomans remain without power two weeks after a major ice storm that caused major tree damage and forced the University of Central Oklahoma to close down for a full week.

UCO had also experienced its own campus-wide power outage for a few hours on the morning of Oct. 27 due to the storm.

Alyssa Carnail-Koerber, a student living on campus in The Commons, said that her biggest obstacle during the week was being productive while dealing with internet difficulties following the power outage.

“Earlier in the week, sometimes the lights would flicker while I was watching TV or doing homework, and everything shuts off for a second,” Carnail-Koerber said. “Obviously when that happens, the internet connection would cut off, and I was like ‘Oh my god, why?’”

However, she said she was thankful that her professors extended deadlines for her assignments and exams.

Carnail-Koerber normally works with Transportation and Parking Services at UCO but temporarily switched jobs to work with UCO Housing’s maintenance team to help with cutting down trees and removing branches.

“That was the only form of work I had — to pick up trees for another department,” Carnail-Koerber said. “If the school is closed or if the weather is bad, we’re not out there working.”

She said “it will be a big hit for the paycheck,” but she will be able to cope financially.

Chelsea Ratterman, the marketing coordinator for UCO Campus Enterprises, said that food and power were the two primary factors UCO Housing and Residential Engagement was concerned about when the ice storm hit.

“We have to make sure those two are upfront and ready to go because those are going to be the two things that students are depending on,” Ratterman said.

The department announced on social media that only two campus dining locations – Ayers Kitchen and Sidelines Sports Grill – would be open the week campus was closed due to the storm.

The department also had to adjust their usual method of delivering food to students in quarantine for COVID-19 located in The Commons, The Quad and The Suites during the week.

“Normally, it’s our housing front desk staff that is the one delivering the meals,” Ratterman said. “The only thing that changed was that it was our resident assistant on-call staff that was handling deliveries from Ayers Kitchen to the different buildings.”

The ice storm also impacted students living off-campus. Charmaine Yeap, a UCO graduate student who lives in an apartment in Edmond, lost power for 12 hours due to the storm.

“I think the biggest setback was when the temperature dropped in the house,” Yeap said. “There was no heater, and it’s not like you could just open a fire in the house to keep yourself warm.

“I actually ended up going to a friend’s place that night we lost power just because it was too cold.”

In a tweet posted on Nov. 10, OG&E said it was still working to restore power for the remaining 2% of customers who sustained an outage due to the storm. The company had planned to finish restorations by Friday, but winds had delayed its efforts.

Additionally, the weeklong campus closure canceled and postponed many student events around Halloween, some of which were rescheduled for a later date.

One of these events was The Center at UCO’s “Safe Sex Scavenger Hunt,” which was planned for Oct. 28.

It was a Halloween-themed exhibition event, where students could visit information booths to learn about homelessness, sexually transmitted infections, trans and nonbinary communities on campus and appropriate vs. inappropriate costumes for Halloween.

The Center announced the cancelation of their event on their social media platforms.

“It was pretty devastating for some people,” said Jessica Addai, one of the student organizers of the event. “We really put in a lot of effort.

“There was supposed to be a lot of information and conversation between different people, and that was what we really needed to do, so it was really hard.”

Addai, also a student intern with The Center, worked with 28 other students to put together the event as part of a creative project for the Introduction to Gender class. The group had started planning for the event in mid-September.

The group hopes to reschedule the event in the spring semester, but no plans have been confirmed yet, according to Addai.

However, Addai said she is thankful the university announced the campus closure in advance as she is a commuter. She added that she already had plans to stay home that week even if the university did not close due to the storm.

“I am a person before I am a student, please,” Addai said.

The Department of Public Safety at UCO has guides on being prepared during emergencies, including severe weather, available on their website.